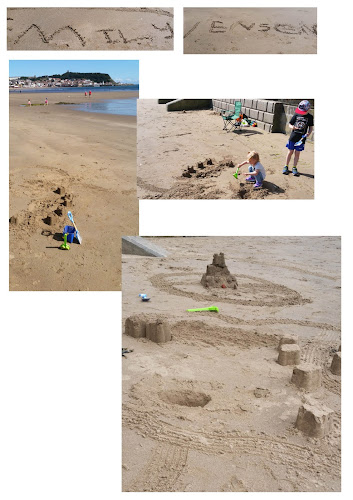 Three sessions on the beach.
It's not as deserted as it looks. Dog-walkers and strolling couples keep moving, so only families tend to stay in one spot.
The sandcastle village was knocked over by Emily. We kept rebuilding and on a non-Emily day managed a high rise structure, said to be flats. There are roads and holes. The holes result from digging and filling buckets, but what do the holes become? Village ponds mostly. If deep enough they will develop sea water. Otherwise it's a long walk down to the sea for grandad, followed by disappearing sea water in the hole. The model shark is sadly beached.
We still call them sandcastles. The buckets have turrets which often don't come out or are knocked off to make houses rather than castles. 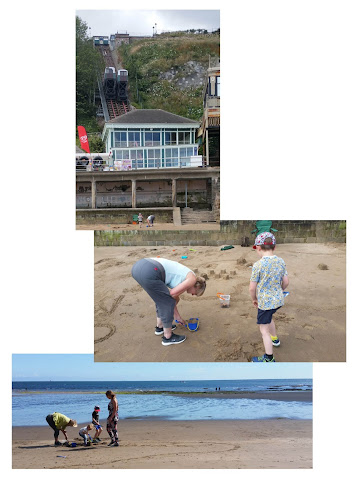 Here are a few beachbums.
The lift is stranded mid-cliff which means everyone has to walk to reach the esplanade. All the works to rescue the cliff itself are complete and there are several new wood railings. A lonely guy and a mower that sounded like a moped gallantly cutting grass. Tired and untended undergrowth waiting the loyal band of volunteers that try to keep the place tidy. By way of contrast, the Italian Garden look brilliant.
This calm picture can be disrupted by large families arriving, standing around not knowing what to do, and then plonking either with a wind break or a mat or two, right next to people already here, including us. And the beach deserted. Feral kids chasing up and down to the sea. Oversized adults. Thoughtless, but really only trying to make something out the beach in nice weather. 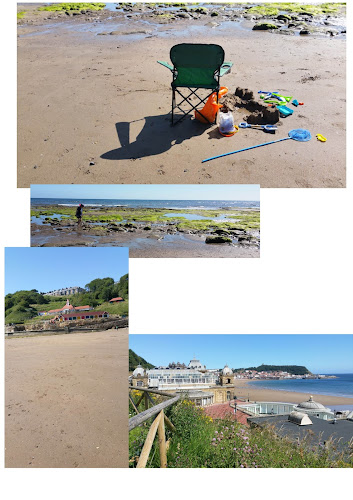 The first session was started by grandad - a hole and 3 or 4 sand houses, close to the sea and the rock pools. Small stretches of sea water left as the tide recedes, captured by outcrops of rock. Bits of seaweed and smooth coloured pebbles are the main inhabitants. They can be used as village decoration if really necessary.
Grandads need chairs.
The Clock Cafe was open, Union Jack proud and flying. We had a take-away drink from the little shop next to the lift. I think it was coffee. The childbride got chatting with the young man selling the usual tat - buckets, spades, tennis balls, other balls and so on. I bought a sun hat there one year which I still wear and still gets laundered. Too tight to purchase a new one at 99p. The young man was a contented soul who was just making enough money to get him through the winter. 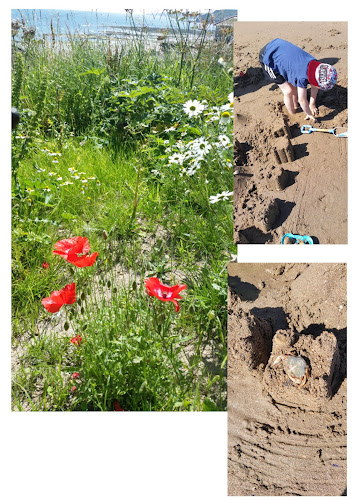 Another beachbum.
The story of the crab. Discovered next to a rock pool, there was never any evidence of life. Jenson adopted it, kept in a bucket of sea water to take back to the flat, transferring it to a plastic dish on his bedside table. Affectionately known as 'crabby' which was original and more often used when referring to grandad. We had to dispose of it when Jenson left for home. Smelling very unpleasant.
The Spa Gardens may be a bit scruffy just now, but there are little moments when you see something. 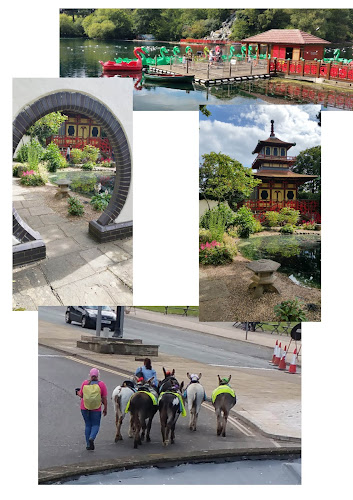 Our fourth session out and about was Peasholm. Jenson likes to explore the paths and pools around the Chinese gardens. We played a mean game of crazy golf next to the bus stop.
No naval warfare.
The dragon boats are neatly aligned. Pre-booked, they go out on the hour, with a deep clean in between. Full too. All you do is go round and round, but people seem to enjoy it, once anyway.
View from the top deck of the foreshore shuttle bus. The donkeys had been on the beach and were on their way home.
South Bay deserted, forshore crammed.
Posted by David Walker