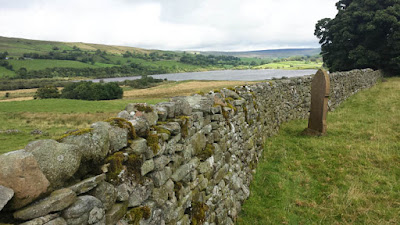 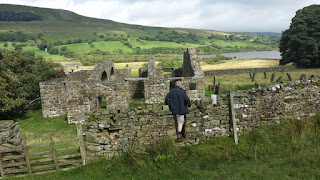 Raydale is the home to the shortest river in England - river Bain is just 2.5 miles.

Ii is really quiet. Sheep, birds, postvan and the odd truck going toward Gayle. The only people we meet are other visitors. Today, after a downpour, the sun is out. The clouds are hurried along by fresh winds which ruffle the lake surface as if the tide was coming in.
We’ve walked up to Stalling Busk Old Church regularly since 1994. It’s a ruin with a cemetary. There is a headstone to a private soldier from 1916 who died in Hartlepool VA. Otherwise the engravings are pitted with age and growth and mostly unreadable. Except the 1985 headstone to a priest and his geologist son. The son died in S Africa and dad followed a month later. Mum waited some twenty years before joining them. It’s a tragedy to which we pay tribute without being intrusive. A spiritual place.

For the full version clic Muker 2016

Email ThisBlogThis!Share to TwitterShare to FacebookShare to Pinterest
Labels: away days, semerwater