In dispute with Ryanair. Small claims now complete. Simply waiting for their response. It's 12 months or so since we bought the plane tickets for Dinard, France. April this year when we were supposed to go and when they cancelled. They have offered us vouchers, but we stuck out for a refund.

We asked a local solicitor for assistance in completing the claim. The amount we were asking for was not large enough for them to be bothered. So we phoned a friend. Sorted in 60 seconds. Same solicitor turned us down when we wanted an advocate for Andrew, our autistic son. Very candidly said they didn't make any money from it.

Received an eye appointment this week, at Acre Mills, 12 months after the last one. The organisation in the waiting room was brilliant and I was seen immediately. Hope they learn something from Covid about how to run a clinic.

Saw an SHO. The consultant was in the next room. Between them they stopped my treatment, after several years. I'll be watching this space and hopeful I can keep watching.

I went for coffee in HRI, there being no coffee bar or pharmacy in Acre Mills and I needed eye lubricant. I was also waiting for the childbride, who hitherto could have spent a good 2 hours with her pal in Birkby waiting for me. "Americano please." "You want milk in that?" I did a double take, but I know, whilst not for the purist, Americano with milk is just about acceptable. "No thanks." So she poured milk in it anyway. Tasted okay. Can't blame Covid for that.

Oct 14th, I successfully completed a zoom presentation for Linlithgow rotary. Big Dave and Joan asked me to do it as he knew I was interested in the history of cricket. A fair amount of preparation and rehearsal. When the time came, it was like talking to myself. I suggested future speakers read their work. Otherwise seemed to go okay. I'd forgotten Gavin Hamilton (Yorkshire and Scotland) came from Linlithgow.

Captain four stripes came for a drink yesterday, with children. "The canaries are back," he shouts with his arms in the air. "I didn't know you'd lost them," says I. "Actually I didn't know you had canaries." "No you clot, the Canary Islands. We are flying there again." "Ah, of course."

We assume this event at Birks' funeral home was connected to Dignitas. It's a bit short, but you get the general idea.

Guess what Phillip Pullman, author of 'His Dark Materials', watches in the evening to relax - Bosch.

Looking at my diary around March onward. It was full of stuff: dates for travelling like France and Anglesey, Alnmouth and Scarborough, Edinburgh and Magic Weekend; choir dates, particularly London as well as concerts and rehearsals; family meets, anniversaries and so on.

It all goes to my major feeling about lockdown - it's robbing me of my time. I'm not sure what this moment is - philosophical or mystical or simply buck up and make a plan.

Chris Hoy was Desert Island Disc guest this week. Grounded good guy. Mind you I've never heard a pompous ass on that show. 'Mr Blue Sky', ELO, was his first favourite. So what was the first song that got to you in some way? Well this was mine, 9 years of age.

Anne Shelton, 'Lay Down Your Arms'

We zoomed pals last Thursday eve. We are not going to see them, so why not.

Our host tells terrible jokes. He also mentioned falling off the toilet, trying to stand. From a Sheffield newsagent's family, he is never without reading material when visiting. Not sure which nerves got trapped in that awkward sitting position, but long enough to produce anaesthesia of prodigious proportions. No information on the fall, if it happened. The major unanswered question remains however ...

This prompted me to relate one of my toilet stories:

My granny lived in Hillhouse as part of a terrace that lined and defined a yard.

Twenty-five metres away, at the bottom of the yard was a long narrow single storey building with six doors, each with its own keyhole. Behind grannie's front door was a nail from which hung neat hand-sized squares of newspaper. A small sewing bobbin and a key also hung there, on a loop of string. A candle too somehow suspended.

The newspaper served two purposes. Much like fish and chip wrapping. No one was ever in that dimly lit ice box down the yard long enough to get a numb bum.

My brother and I were flummoxed by a singular fact however. Behind grannie's door there was only ever one match. 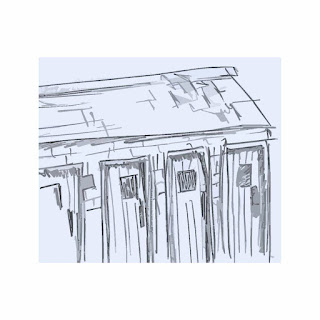 Now another one from Dave Whalley.

The outside loo never seemed to be a problem to us, though in the later years many of the houses on the street took council grants to turn the back bedroom into a bathroom with toilet. We never took the opportunity. That was my bedroom which had a plumbed bath in it which Dad had boxed round for privacy. We preferred to keep things as they were and were quite happy with the situation until Grandma died and Mum and Dad decided to move.

My main memories of the outside loo were going over at night with a candle or torch - the candle was more romantic ... and warmer! I don't recall it feeling spooky but whilst sitting there the imagination could run riot and the tiny room became a ship at sea or a cabin in the forest. I often had to be called back for staying out too long. It also provided garaging for my much-loved scooter, tucked at the side – we had no other outside storage.

As far back as my memory goes we used toilet rolls - Mum was quite fussy, but my other grandma who lived at the other side of Sheffield (nearer Sheffield United's ground) used old copies of the Radio Times, which nicely tore into two to hang on a piece of string at the back of the door. Always something interesting to read there.

A final memory which ties in nicely with the toilet theme. There were huge crowds at the Wednesday Ground in those days and often the fans threw toilet rolls onto the pitch. I shall never forget the day of a really big match when one rained into our yard over the roof - much appreciated.

Again on this theme, we have a lovely book that we've had for years called 'Temples of Convenience and Chambers of Delight' by Lucinda Lambton. Very interesting and beautifully illustrated and available for loan to anyone interested. 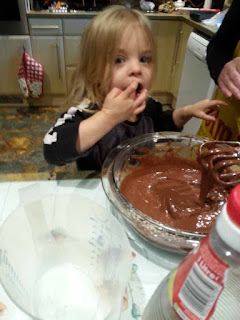 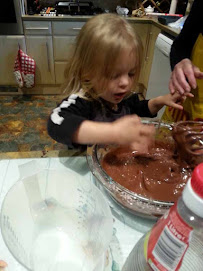 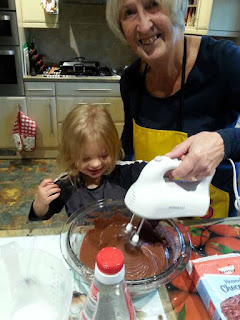 We had Em to stay for the first time. 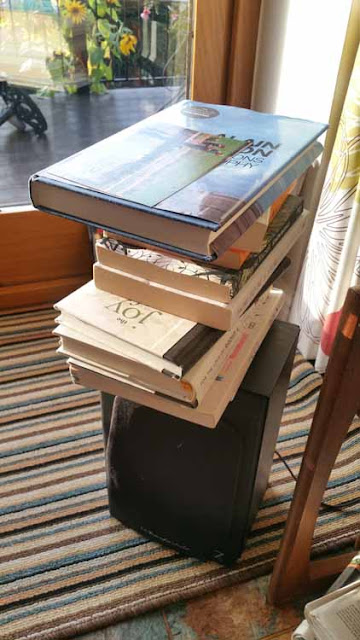 I should coco (or is it coacoa?). No it's cocoa.
Wiki defines this as 'Rhyming slang for I should think so or I should say so. Used sarcastically so the literal translation is I should think not.' So there.
No offence to Jack Reacher but he's about my level at the minute. 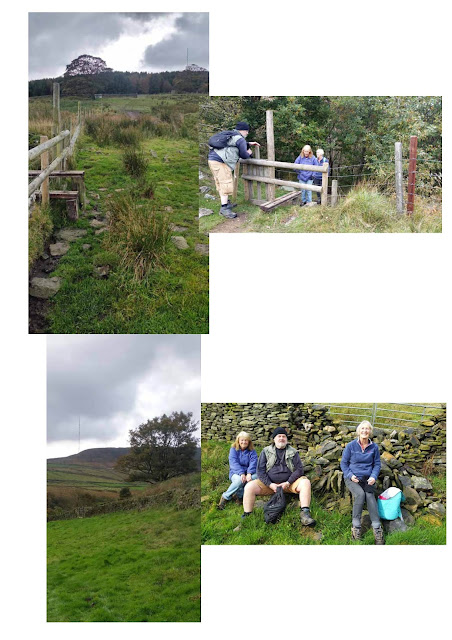 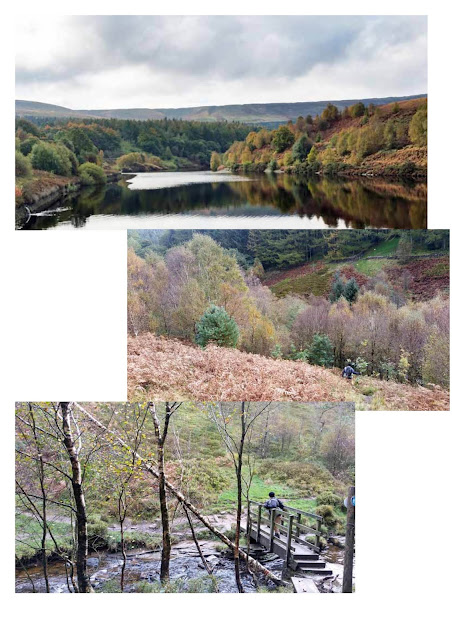 Met Barry Garside on our walk yesterday. Still with Bolsterstone, but no zoom rehearsal. Both his daughters are in France, one hoping to get married soon. He's 77 and doesn't look any different to the Llandudno days, playing 'rabbits' in the Snowden.
Bob McCartney and his wife passed us lunching al fresco at the Pickled thing, is it pheasant? Tom and Pippa dropped by in the van, but he was hijacked by some guy, so I didn't get chance to speak.
Dorian is exploring a video event - watch the website for more.
The training day at Mrs Sunderland is still on apparently - 'The Armed Man' with Tom Meredith.
John Cross, author of 'The Curate and the King's Coin' is out digging again in Outlane. A roman road. Whatever floats your boat. The sheep are taking an interest in him.

Email ThisBlogThis!Share to TwitterShare to FacebookShare to Pinterest
Labels: away days, family matters

Carol Kain posted a recording of 'Abide with Me' from the RL Challenge Cup final last weekend.
This video is my tribute to the hymn and what it has meant to my family.
Posted by David Walker No comments:

It's been a slow week for gardening and curation. We were supposed to be visiting Anglesey, but that fell through. Used the time to learn how to put slides on zoom, not too successfully as yet, but more or less ready for my talk to Big Dave and Joan's rotary group in Linlithgow. Cricket and textiles during the industrial revolution. Dave's choice. End-to-end stuff.

The cricketers are shaping up. Difficult to get them to pose properly. The garden is a bit overgrown just now, but the cosmos and robinia are good. And the wall has reappeared. Haven't seen the frogs for a week. Em keeps getting in the act. 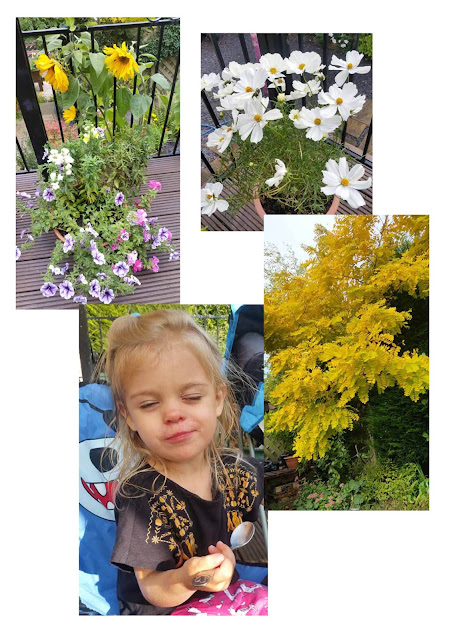 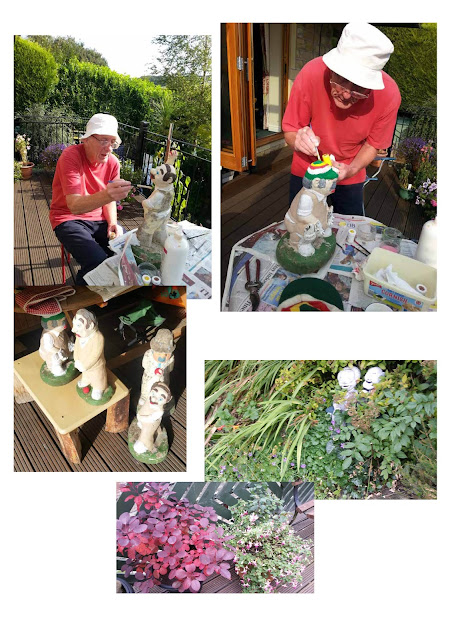 So all that was 2-3 weeks ago. A whole load of weather a whole load of Boris later I'm not in the best of humours. The talk is done however - strange experience on zoom. 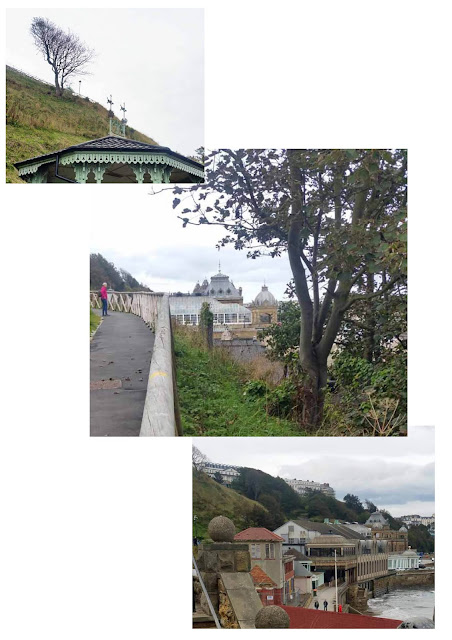 Different views of the Spa 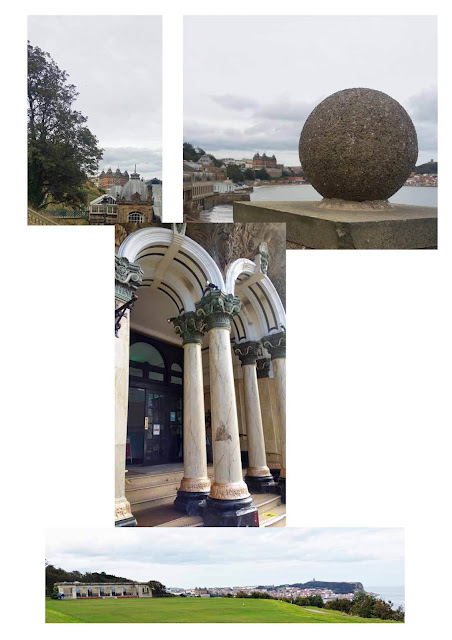 Different views of the Grand 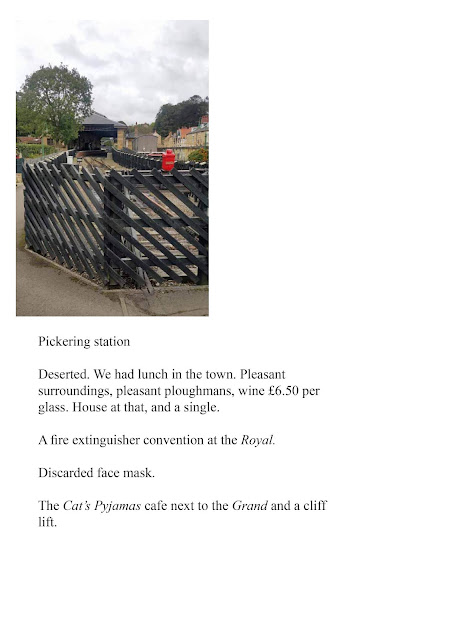 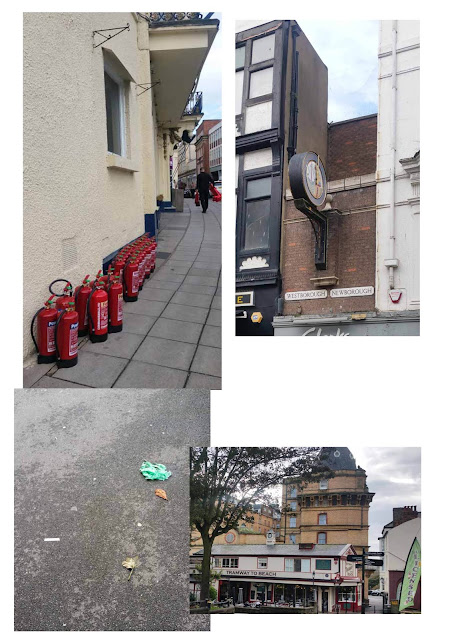 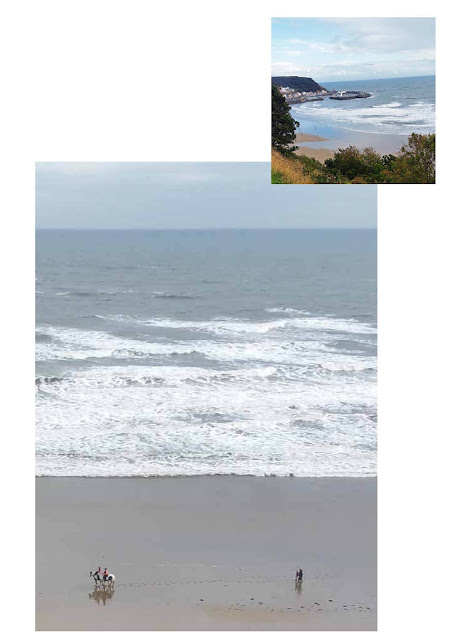 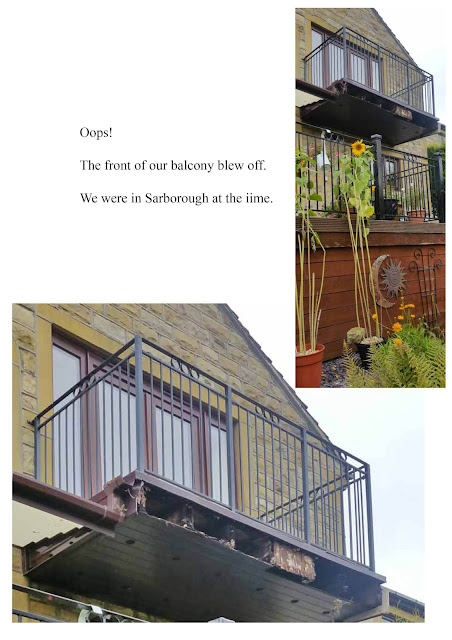 iime is Scarborough time and I can't be bothered to redo the caption in indesign.

Difficult to say anything constructive. Time for some rhubarb therapy - stay in the dark and expect some manure regularly.


When he rides up on his horse
And you feel the cold winter chill
Look out your window and smile
Don’t let the covid in
Posted by David Walker 1 comment: