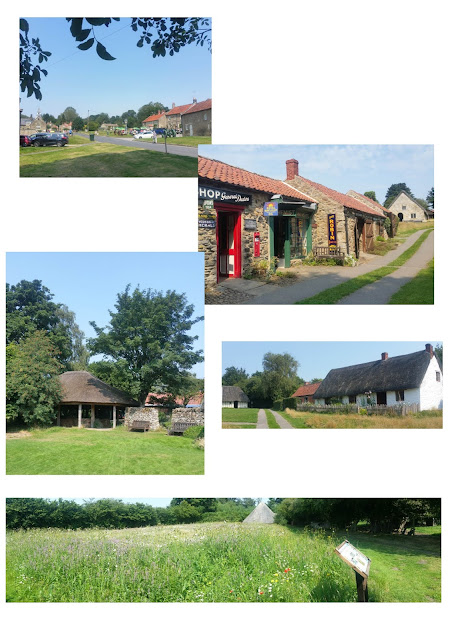 Ryedale folk museum
It's a little gem tucked away in the N Yorks Moors. Along the lines of 'The way we used to live'. We enjoyed Beamish and Black Country museums which are industrial and mostly in working order. Andrew, our autistic middle child, had mixed feelings about Wolverhampton outside toilets but greatly enjoyed their pub. Ryedale is pretty static at the moment apart from the meadow. One of the gardeners was trying to recover a cornfield from the grip of thistle. Good luck with that. There are animals and birds which can be fed. A feature on Geoffrey Willey (A life through the lens), born in Honley, becoming a well-known photographer in Scarborough (clic on link). The round building is a preserved glass furnace, recovered from neighbouring Rosedale (clic on link). Active during the 16th century when glass-making was illegal and carried out in secret. 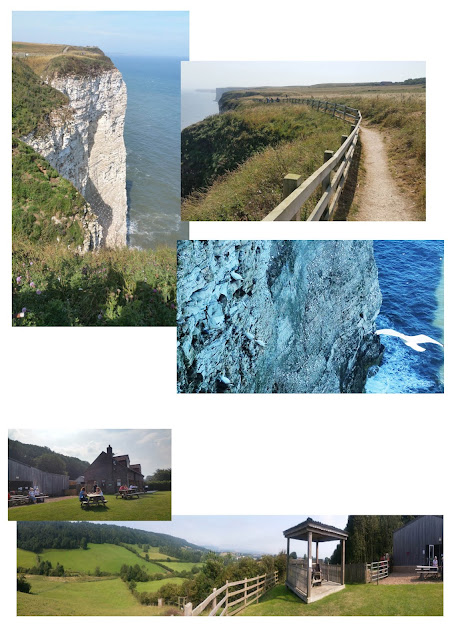 Bempton cliffs and Stepney Hill farm
Sadly the puffins had gone. If you like birds, Bempton is for you. If you like a walk and a picnic overlooking the North Sea, it's also for you. As is Sewerby (see below).
We used to be keen on a butcher on Ramshill, Scarborough, which did meat pies to rival Hinchliffe's and great gammon and black pudding burgers. It closed last Easter but they have a farm shop near the hospital yet well out in the country. Coffee as well in the garden. Don't make the burgers any more - boo! 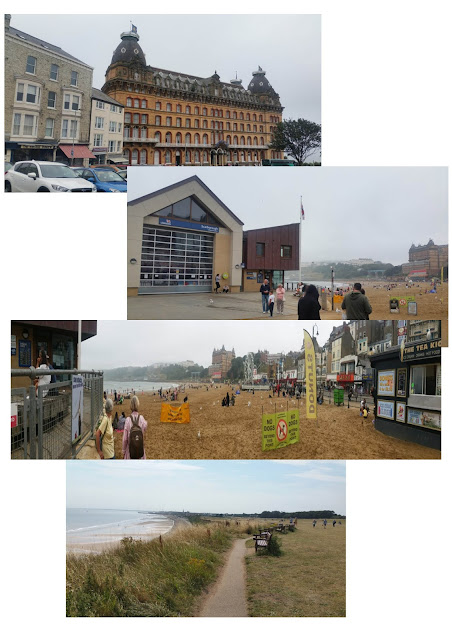 Grand Hotel built 1867. New Lifeboat Station.
'The hotel's heyday was arguably during Victorian times, when wealthy holidaymakers made up the establishment's clientele. As Scarborough was a famous spa town, the building's baths originally included an extra pair of taps, so guests could wash in seawater as well as fresh.' (from Wiki). When the railway came mid century along with lots of workers and their families, it bent middle class noses out of shape a touch. Interesting that it was a Billy Butlin establishment at one time.
Sewerby is a big area of grass just north of Bridlington. Reachable by land train. A cricket club with two squares - why go anywhere else?. 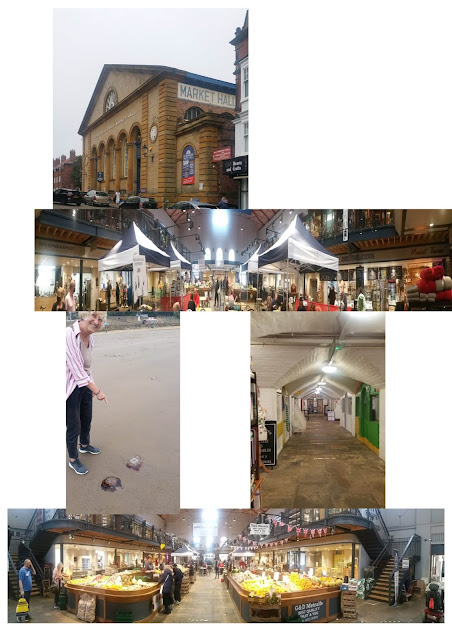 During lockdown I've been re-reading crime novels. Michael Connelly is one of my favourites and the current book is 'The Poet'. Serial killing. It's extremely procedural so not an easy read. The end is a bit rushed. Each murder is signed off with a line of Edgar Allan Poe's verse - part of a failed attempt at making it look like suicide. (1809-1849) 'Outstanding poet, essayist, and progenitor of at least five literary genres: the short story, horror, science fiction, psychological fiction and the crime novel.' 'The Mystery Writers of America award, the Edgar, is named in his memory' (Rough Guide to Crime Fiction, Barry Forshaw, Rough Guides).
The Times 8th August poem of the week by Lavinia Greenlaw, reviewed by Tristram Fane Saunders. Poems, like many of us, sometimes leave Tristram baffled 'genuine poetry can communicate before it is understood' according to T S Eliot. She didn't have time to ask what Greenlaw's poem's meant - 'rough and messy, a place of nettles, wattle and daub' 'heady rush'. Meaning can be an excuse for poetry; it's really about the imagination. So enjoying this form of writing at a number of levels. Reassuring to a sad haiku writer like myself. I cheat by having a title and a picture and they are not strict 5,7,5 beats. They are composed on the spot and rarely edited with something about the seasons. Work in progress along with all the other stuff I get sidetracked by.

Mindfulness is a bit trendy. For us retired folk, trying to stay in the present moment might help. It seems that the prospect of any change soon is slim. Why worry? (Clic here)
Apologies for posting material from the past - not very mindful. I thought it would cheer people.

Belgium - stepping into the past


New Mill Male Voice Choir toured Flanders in May 2014. The Flanders towns Ypres, Bruges and Ghent were the principle destinations, both to take in the sites, to sing and to search for connections with the West Riding. Wool was king here long before Huddersfield, Leeds and Bradford took centre stage during the industrial revolution. Sadly, many Yorkshire men lost their lives here, during WW1.

In the early middle ages, Flanders was an important trading centre. Merchants, becoming very rich in the process, bought raw wool from England and employed artisans to make highly desirable cloth for export. Canals, fine merchants’ houses and large cloth halls were impressive, though the Ypres buildings were modern reconstructions of structures razed in WW1 by the Germans. Ghent also had factory remains from a 19th century textile revival. These reminders fitted snugly with 21st century bars and bistros.

Two cathedrals, Bruges and Ghent, hosted the choir on successive days. Bruges’ Sint-Salvator, whilst built in the 10th century, obtained cathedral status after Belgium’s independence in the 1830s. The organ was massive, expanded and rebuilt three times in the 20th century. Saint Bavo of Ghent was consecrated in 942, completed in 1569, becoming a cathedral in 1559. It houses the masterpiece The Adoration of the Mystic Lamb by Hubert and Jan van Eyck. Bruges was the more intimate space, and both had exceptional acoustics.

We spent a day with a guide, exploring Ypres and Passchendaele; the battlefield and the cemeteries. At Essex Farm, the cemetery was next to a dressing station, manned by a Canadian surgeon called Lt Col John McCrae who wrote the famous poem In Flanders Fields. One of the poignant moments here was at the graveside of a sixteen year old. At Tyne Cot we were reminded of the 100 days it took to advance 5 miles prior to the third battle of Passchendaele when over 250,000 British lives were lost. We were told about excess rain, artillery bombardment, mud and murderous machine guns. And executions for cowardice. Beyond our experience, hard to imagine. It’s a peaceful place now.

We sang Let There Be Peace On Earth and Abide With Me at the Menin Gate, which with Tyne Cot, are memorials to those who have no known grave. Adam, our chairman, read an extract from Robert Binyon’s poem. The names of soldiers from The Duke Of Wellington’s Regiment (West Riding) appeared regularly on the memorials.

Everything we reflect on in the present is already history. Making sense of personal history depends on our first memories and the memories of relatives, personally known to us or known to the generations we grew up alongside. This living history goes back maybe to grandparents and their siblings, many of whom died in Flanders. Most of us abhor violent conflict on any scale and the heartbreaking loss of young lives. Yet there was dignity here in Flanders, in the white symmetrical stones and the neat names carved on walls. Row on row, just on the edge of our personal histories, still not a remote date in a history textbook.

Flanders was a great place to visit, and to sing, and to catch up on history some of us might not know a lot about, until now.
Posted by David Walker No comments: 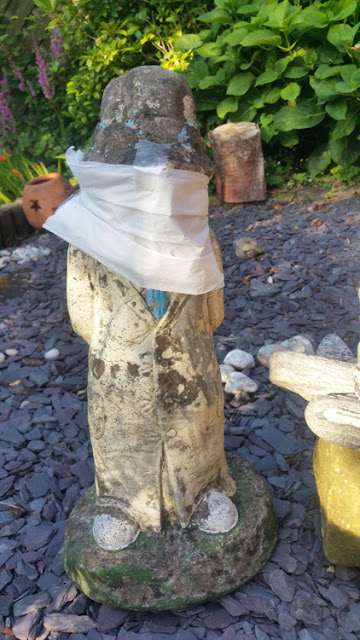 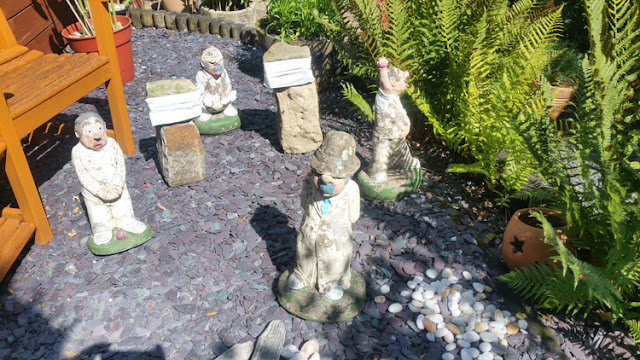 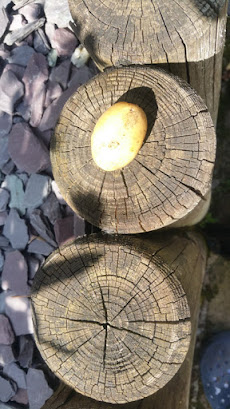 For some strange reason I rarely finish a meal without spilling something down my trousers, despite PPE. The childbride says it is because I sit too far away from the table. Mind you by Friday I have a pictorial if sketchy record/memoire of my week's menus.
Lidl and paying for my lager. "Please press enter" requested the checkout lady. My credit card bounced twice - I hadn't memorised my new pin - bless the Amazon Prime scammer and my card replacement. So to the debit card. It bounced immediately "Please insert it the right way round." Not going well and feeling like a prune. Okay right way in and pin keyed in. "Please press enter." OMG I needed a hole to appear and for me to drop into it.
"Thank you" I said quietly. "No problem, have a nice day." The next customer was already being processed.

A great letter in the Times this week, from Heather Wilson, Bath. Treating anxiety in her experience comes in threes: daily exercise (yoga, dog walking), social activity (singing in a choir) and helping others (volunteering). They may interact. More useful to her than cognitive behavioural therapy.
'Sometimes just keeping busy, and the mind actively engaged, can benefit more than analysis.' 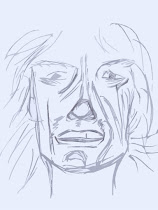 Covid is still out there - no slack room

There is no let up from covid. Lockdown looms relentlessly.
The prospects for both positive and negative are unchanged - eg time for a purpose vs creepy dark side.
And we could all get infected.
words from 'Don't let the covid in'
many things we have done
some good and some bad
leave your troubles behind
enjoy the love that you have
stay true to yourself
keep as trim as you can
sing and dance a safe space
don't let the covid in
things have not changed
sit tight when you’re called
rules are still there for reasons
we must all get along 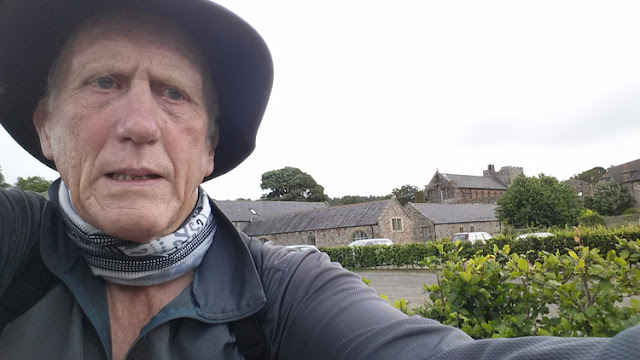 a snood will do it
Posted by David Walker No comments: 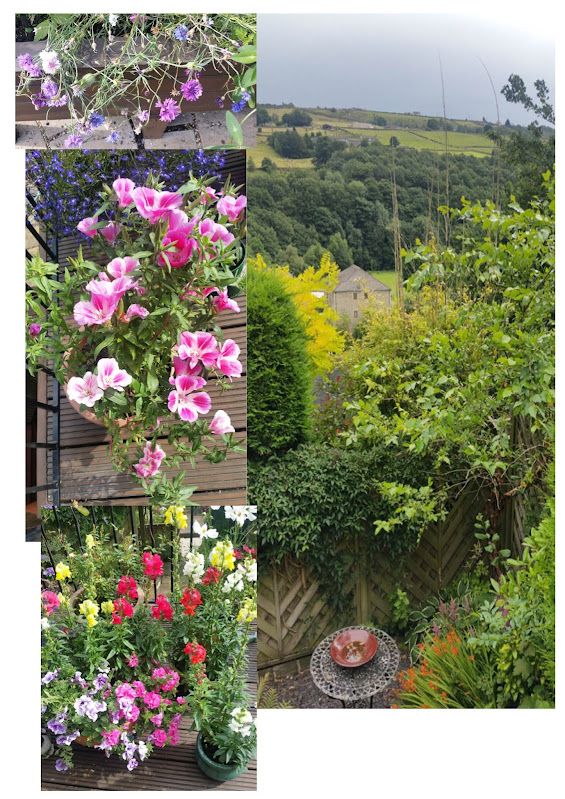 Wild and cultivated. The middle one is a present from grandson Jenson. The bamboo has just had some babies. Nearly as tall as the original plant. 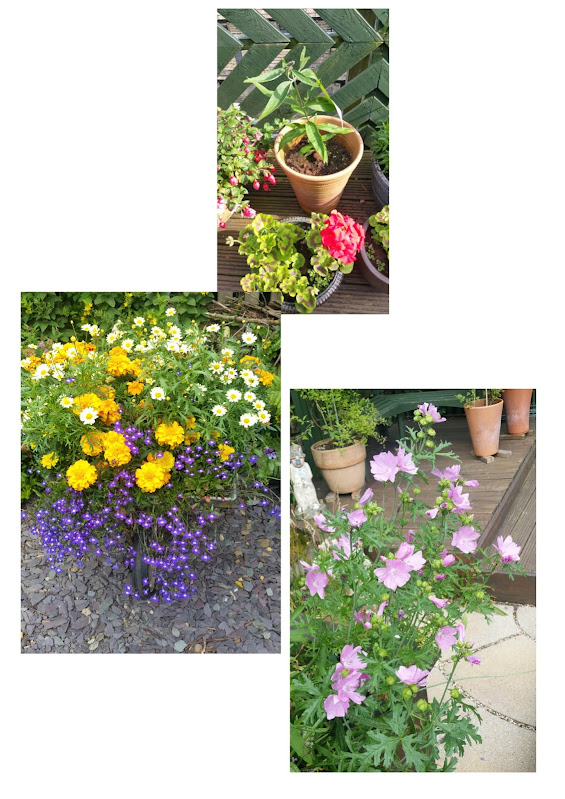 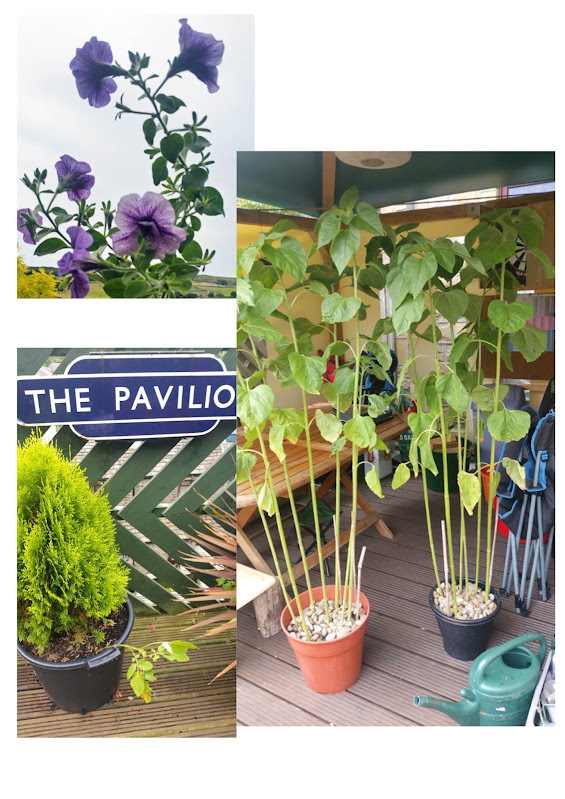 A potato has appeared. Stretching sunflowers. The childbride got them for free and planted them, not thinking they would do much. Over the weeks she has got more and more neurotic about them. In and out of the wind and obsessive watering. And, no sunflowers. 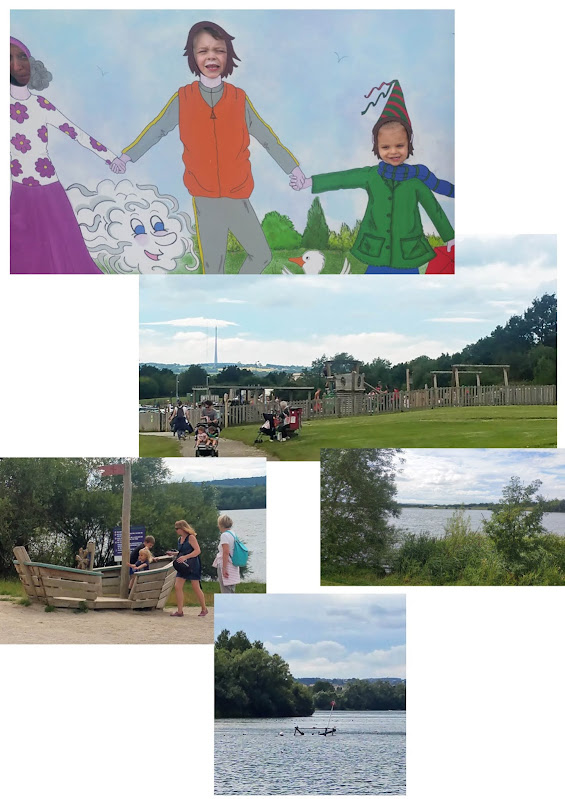 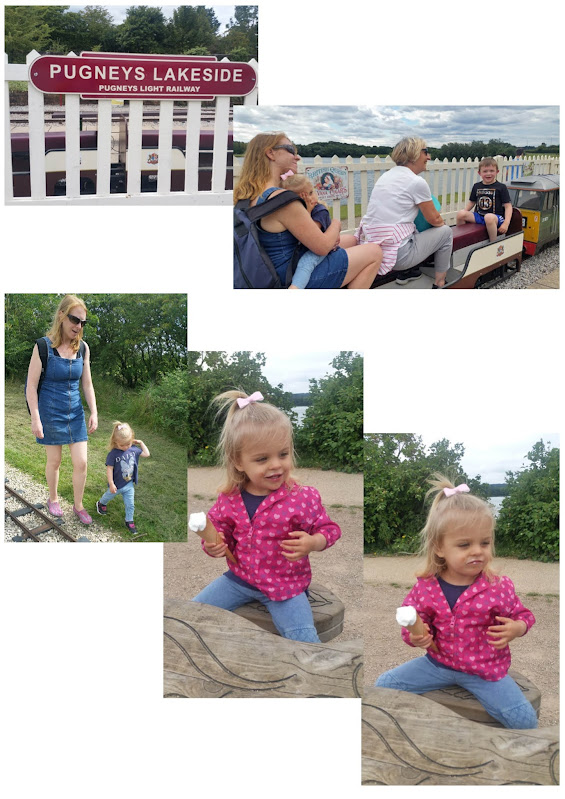 Railway treat. Two train sets with alternate decoviding sanitiser. Emily only likes the flake.
Amazing, but true, we met Alan Brierley and Ann - they look well and Ann is tickled by her new grandchild, not physically yet. Alan looks very well. 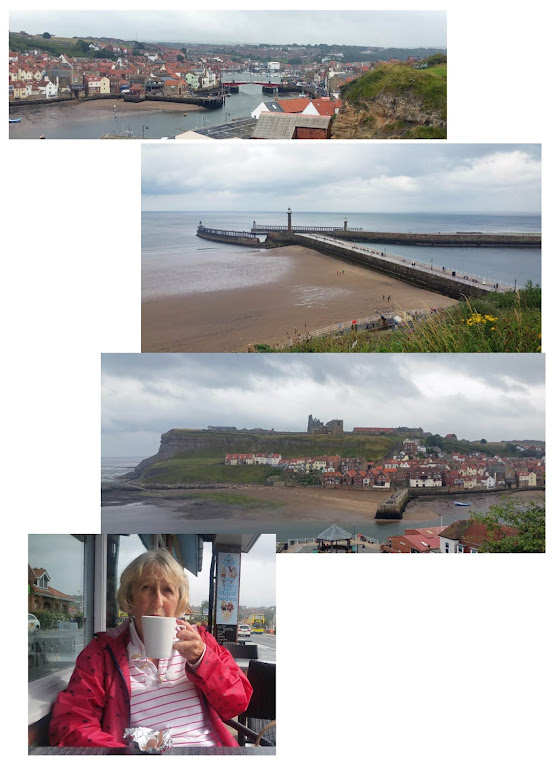 Even on a poor weather day, there are some half decent glimpses of Whitby.
We went because of the need of something to do and the rain. Travelling on the bus was not a problem.
Note the forbidden marshmallow. 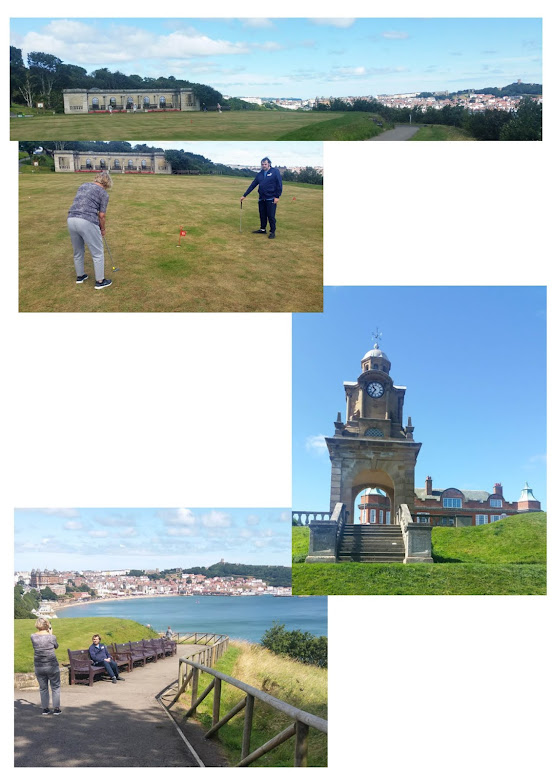 Preoccupations will inevitably surface. We couldn't go to Flamingo Land (too expensive), Peasholm mini golf (too wet), the big wheel (too late). So putting and pints. And a short walk.
That beachbum certainly gets around. 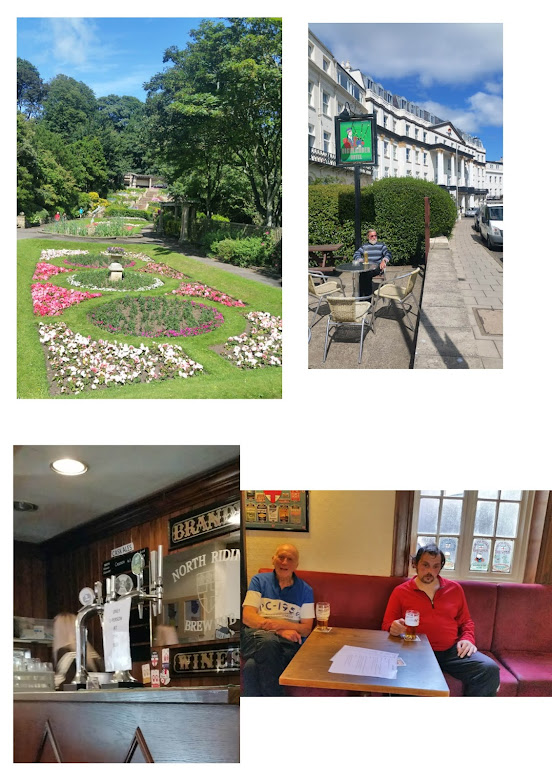 'Same old' at the Highlander apart from social distancing. Someone even called me Victor Meldrew which didn't make any sense to me, and Andrew took exception to.
None of the usual N Riding home-brews.
Read more »
Posted by David Walker No comments: