Age is simply a number, isn't it? 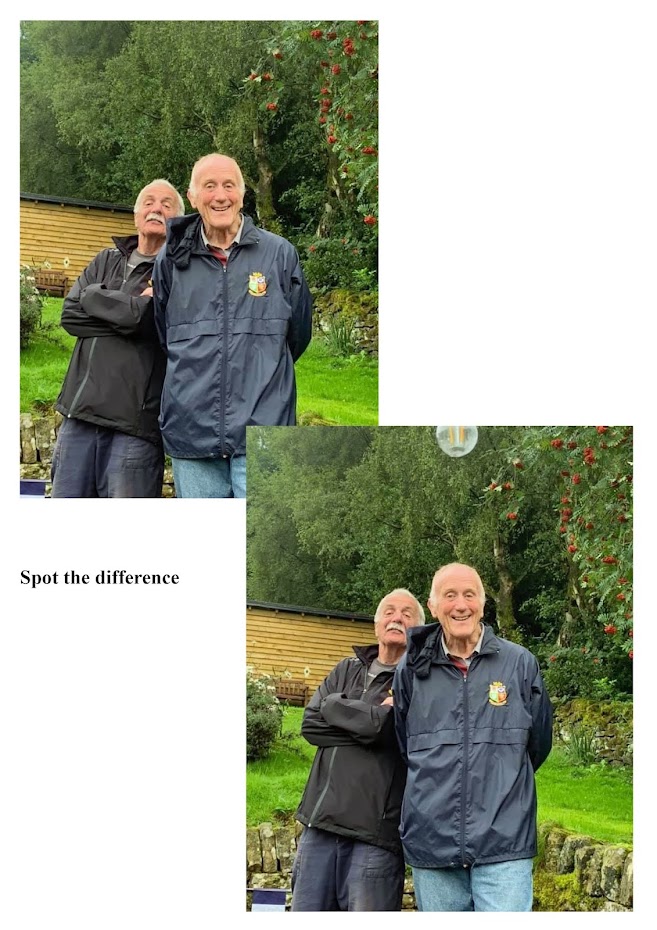 Can you write a better third line?

Times Aug 7th, Rose Wild (feedback). 'Please don't call us Pensioners'. A column that receives its fair share of complaints about writing style and vocabulary. Some good things too.

Dates for receiving a pension are variable. And, strictly, this refers to the state pension. 'Retiree' is no better. 'Seniors' was an alternative suggested by Philip Burt. Officially, this refers to golfers and tennis players who no longer play in the main tournaments. 'Aged' and 'elderly' are sensitive as most over 65s are fit and well and likely to remain so for some time.

The Times Feedback on what to call people over 60

Times readers write to the Feedback article about house style - the right or wrong way to write; a discussion
between them and The Times. Much in the way I use hyphens and semi-colons.

This week it was about what to call people and things of a certain age (Rose Wild, March 18th, 2017).
'Getting a life' comes to mind. Cars' ageing classes are very precise and not to be mucked about with
(veteran, classic and vintage). Human classification is more flexible. Experience and expertise influence
the word used in addition to the amount of time involved. A veteran broadcaster for example may not have
retired. Itoje, England's lock forward, is 'old beyond his years', which I think means precocious.
The Times house style discourages 'old', 'aged' and 'elderly'. Here are some alternatives:

Any suggestions?
.....................................
Since exploring my family history I have taken an interest in the nineteenth century and industrialisation.
Textiles in particular. It might be assumed that industry began with factories around 1830, but mining and
making stuff like cloth predated Arkwright. Smallholdings with a loom in the front room
for example.
'The Story of Work' by Jan Lucassen reviewed Aug 7th, Times, suggests that worker productivity increased
during the seventeenth and eighteenth centuries, before technological advances came in. Reasons maybe
specialisation, protestant work ethic and wanting to buy stuff from the colonies. Cultural change too. Work
got attached to morality and personal identity. Sadly working conditions were dire even then.
Mechanisation has not abolished work allowing leisure to take over. We want more stuff and the office is a
social good, especially as religion and group recreations have become less attractive.
'Work is important for humans - I don't think I've ever met anyone who is able to be happy without it.
Nevertheless we must be wary of its ever increasing conquest of our lives'.
So its a book about work - I liked the bit about work and increasing productivity predating
industrialisation.
Posted by David Walker No comments:

Email ThisBlogThis!Share to TwitterShare to FacebookShare to Pinterest
Labels: older people can still be active 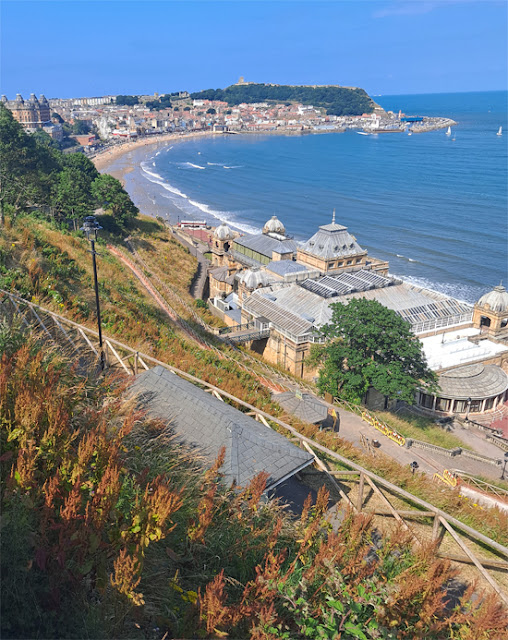 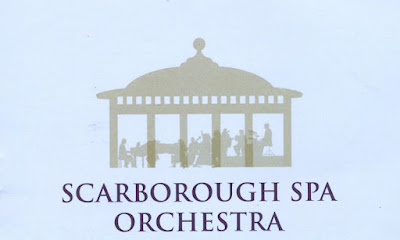 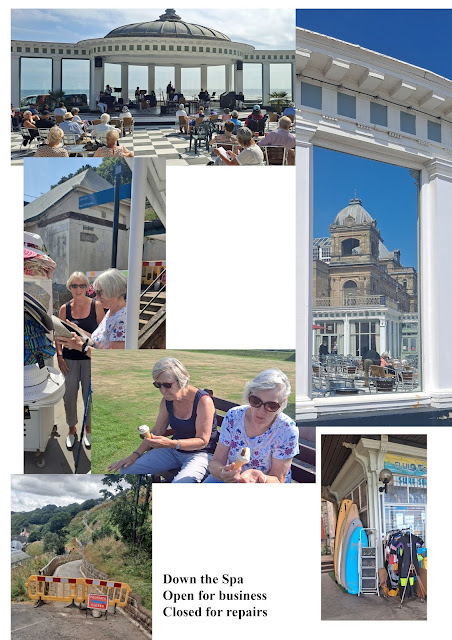 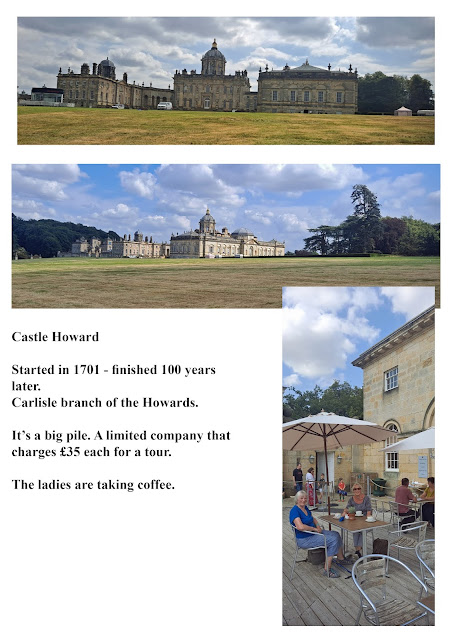 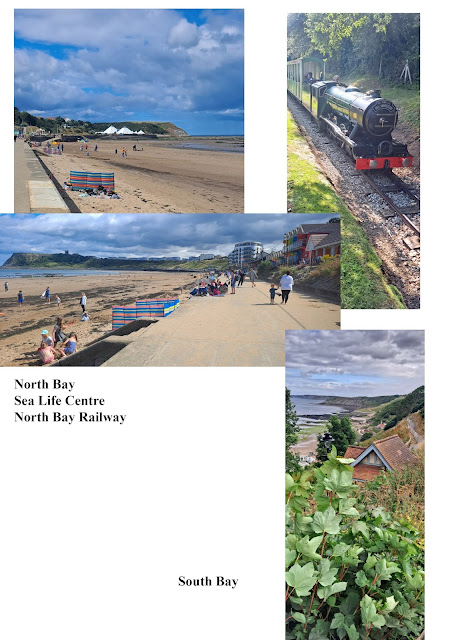 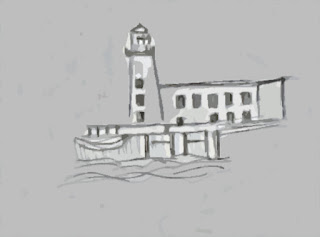 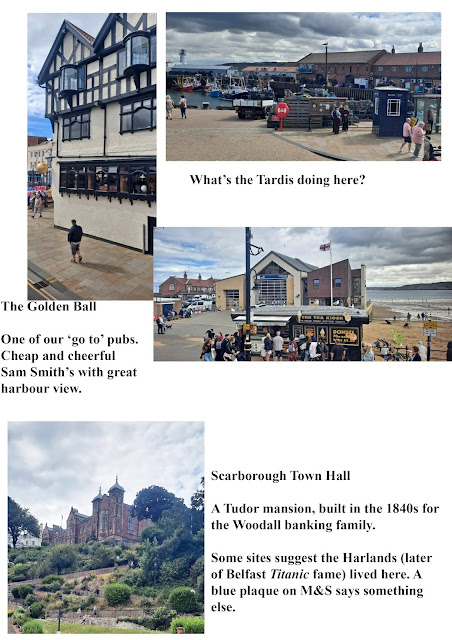 I went shopping with the two ladies - food. Everything I chose and placed in the trolley went back on the shelves. Not quite true. Paella survived.
The streets were a mess - cigarette packets, disposable lighters, weeds, grass, pigeon poo, random litter.
Private affluence, public squalor. Or, has the council run out of money or employees or both.
We nearly didn't get to Castle Howard. Road-up and diversion signs everywhere. Until we ignored them as most of the other motorists did.
Most people wore masks in shops. A few had their knobs out - why?
How is it women make an effort to be smart and colourful in the sun and blokes wear black? Shorts and matching dark socks with trainers.
Still a lot of repair work in Spa gardens. Shelters, paths, children's playground and tunnel restoration under the lift track.
Another RNLI bucket volunteer in Filey park. A lady. Doing well too - lots of folding. I mentioned our Anglesey moment down on the pier. She wasn't handing out cuddly toys though.
.............................

Rhys Blakely - Times July24th. We know there is no relationship between happiness and finance, though possibly with unhappiness at the precarious end of the spectrum. But, there is a relationship between health and wealth. More money, longer life. Twin studies from Northwestern University, Illinois.
So poverty and shorter life-expectancy might be a genuine public health issue. Being able to afford quality foods for example.
India Knight - Sunday Times Aug 1st. About grandmothers. 'Ageing is a biological inevitability'. Illness maybe and death, but not yet. Future-worry is pointless. Joy-now. 'Who fears the present? It's a terrible use of anyone's time.' She goes on to write that 'ageing is wonderful - until at some point it isn't.' Nice?
Songs about ageing - available on Spotify
Forever young - Rhiannon Giddens, Iron and Wine
Don't Let the Old Man In - Toby Keith from the film 'The Mule'
In the Sidings - Louis Killen from 'Gallant Lads are We'
.............................