Take2 - Mouth of the Tyne Festival with Marilyn Monroe 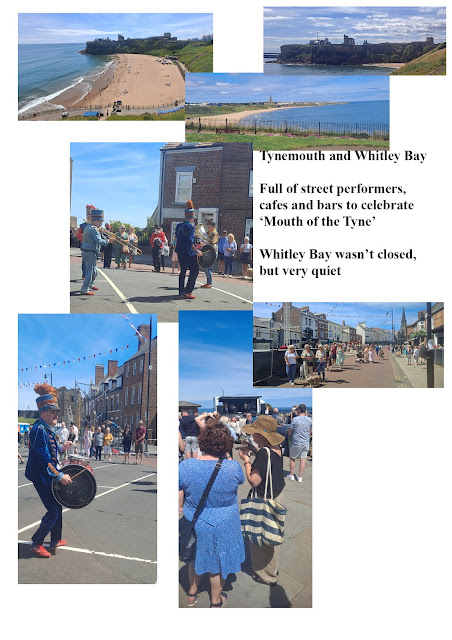 A19 is a very good road. Managed to crack the Tyne Tunnel on-line fee - there and back. We finished two miles from Tynemouth due to a last minute change of apartment - looked brand new, tiling everywhere which helps cleaning. Refund offered which didn't impress. So a lot of walking. Pete was not long post knee surgery and we wondered how he'd go.
First morning, we asked a bloke walking with a bike the way. "Follow me". So we did, what a nice man. Tynemouth mobbed when we eventually made it. Festival of street performers and craft stalls. Great.
Craft beer on the station. Pete asked if they had lager. He's a bit deaf, so the reply came, "Yes, rubbish". "I'll have a pint of rubbish then". "No, Spanish" the barlady corrected.
We investigated the local bus service - a complete mystery. We nearly caught the 306 three times.
Whitley Bay was very quiet. A Scottish bloke sat at the bus stop gave us a tutorial, but still a mystery. A couple of hours later, after a pointless walk around Whitley Bay, he was still sat there. We managed to catch one of his suggestions - the trip went through a massive housing estate where every road looked like every other.
Tynemouth station is massive. Presumably built for holiday makers around the 1880s. Now on the Metro. Most weeks craft stalls selling a lot of stuff - even old bottles. A stage hosted choirs and dance troupes. Lovely for the kids to sing whilst signing.
So to Newcastle. Pete lost his ticket and was awarded a 'yellow card' by the inspector at St. James. I lost my Greggs corned beef pasty. Found a small quiet bar on a side street. Contrast with the crowds just outside the stadium. Anyway we won. I draped my fleece over my arms for sun protection. During the second half I felt someone tugging with one of the arms. Turned to see a mature lady trying to cover a bare patch. I haven't lost it. The husband didn't look pleased. 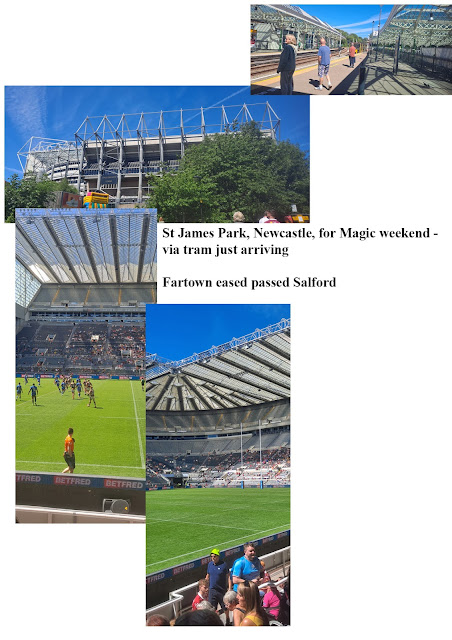 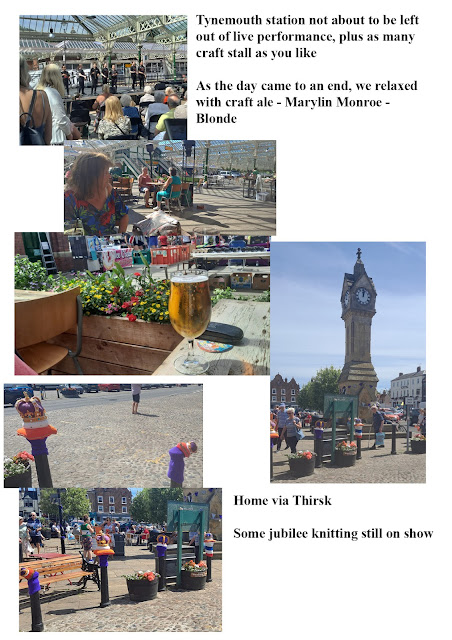 As usual an entertaining weekend. A lot of walking. Pete's conclusion "it's my new knee rehab".
Posted by David Walker No comments: 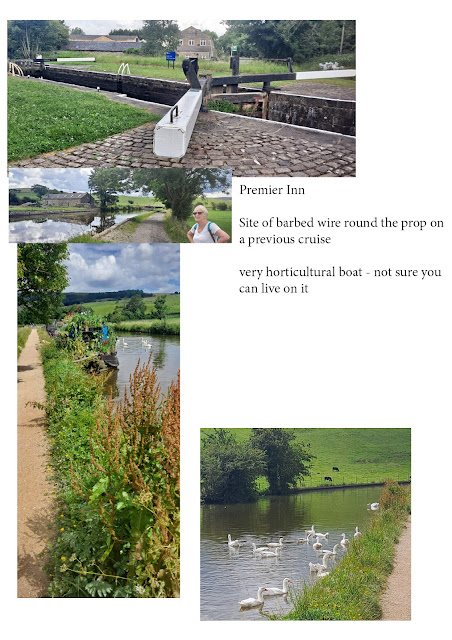 The Premier Inn is cheap and cheerful, right next to the main Settle Road and the Leeds/Liverpool canal. I've made a note to read about the canal and its origins. Something about getting a west coast outlet for coal amongst other things. Shire Cruises were called out when our prop stopped working. Boss came up from Leeds.
The horticultural boat was a bit too overgrown to be a thing of beauty. Unusual. 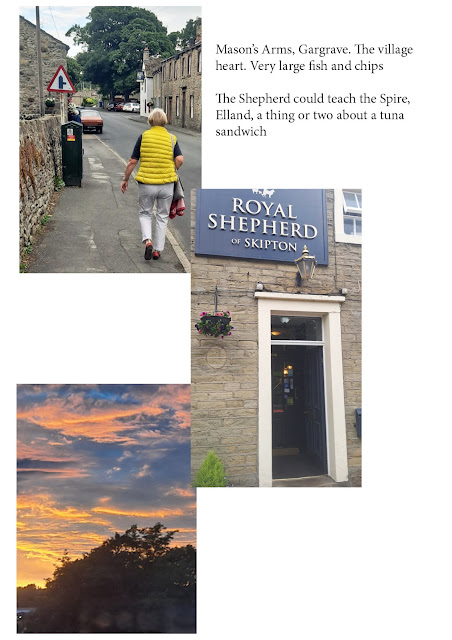 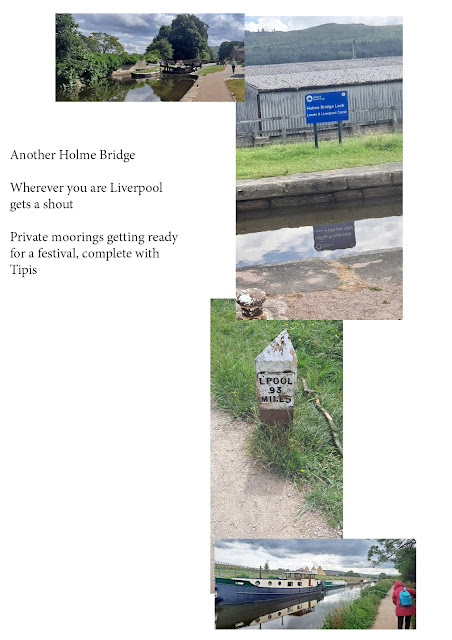 The pick of our few days was the five mile towpath walk from Gargrave to Skipton. The weather helped. Caught a return bus. No doubt lots of Holme Bridges in addition to Holme Valley, Huddersfield. 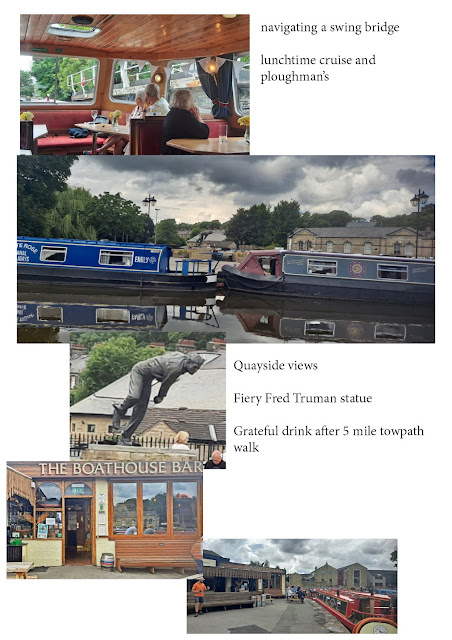 Journey's end and a welcome pint. Fred gets a little lost in and amongst.
Following day, ploughman's similar to the Ham and Cheese, near Malton. Walked into busy Skipton. I bought a new sunhat and Sheila a blouse. 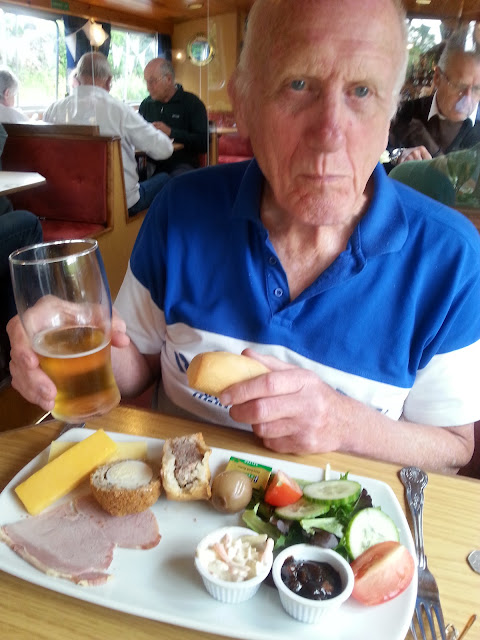 So strictly speaking not a cruise - that boat has departed. Brilliant to walk one of the great canals as it braves it out into the country. Kind of rural but probably strongly industrial back in the day.
Posted by David Walker No comments: