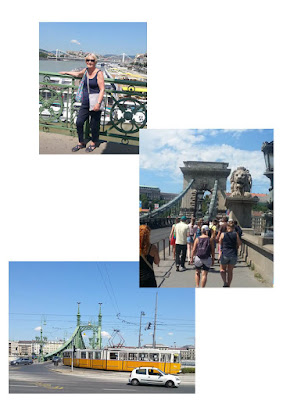 Contrary to our expectations, English was spoken everywhere - everywhere we were spending money anyway.

Buda is supposedly posh. Pest is trade. I wonder where the erstwhile in-laws live?

Other first impressions from the taxi ride in from the airport were lousy road surfaces and mad driving e.g. switching lanes at speed in confined spaces.

Toni Curtis was a Hungarian Jew.

The currency was Florints in telephone numbers. We discovered the exchange rate from a crone manning the toilets on the Citadel. A pee was either €1 or 250F.

It seems that most countries have had a piece of Hungary over the years, except Britain. It's surprising it still exists.

One use for the Labyrinth I forgot to mention was a haarem.

Elisabeth Square (where the big wheel was) and surrounds, with the Jewish quarter, was a slum which has gradually become gentrified, except the 'ruin bars'.

Our brilliant tour guide said there is no written Hungarian history. You can just make it up.

The kids would choose a weekend when the European Swimming Championships and the Hungarian Grand Prix were also on.

There was a full length mirror in the lobby of the apartment, a space we needed to negotiate in the night to visit the toilet. Scary! First time anyway.

We put towels on the balcony to dry. No phone calls from the residents' committee. Not like Tenerife.

I had deer stew one night. Don't. Goulash is good.

I set the alarm on UK time for the return airport taxi. Thankfully I wasn't sleeping anyway.

I'm not anti-skimpy clothing, but some of these young girls were seriously skimpy.
Posted by David Walker