Malta - an inspired choice for a music tour and holiday

The question
It's actually a series of questions. Who emailed me and how did they get my address? Did they know I was interested in singing something different to mail voice repertoire? How would I actually get on with choral singing? Would Malta be okay? With a load of people I'd never met?
It turned out well. Strangely enough I enjoyed the rehearsals in sunny Skelmanthorpe (clic on rehearsals) and the concerts - Sheffield was my pick (clic on Sheffield concert Wakefield Concert).
Jane and Dan were excellent. Thanks to them for the music tuition and the organisation.
Thanks also to the cello player. Despite endless queueing we were never lost - just follow the lady with the big box on her back.
And so to Malta.

The chocolate factory
The chair of Honley Ladies is related to the chocolatier who runs sessions in chocolate appreciation. She was over on holiday. And the rest of Monday is a bit of a blur. Because we had to appreciate them alongside five cocktails - stiff ones. After all, we had been up all night, catching the plane and whatever.
It never ends there. A beach bar, several red wines and San Miguels and of course you need to paddle in the sea. I think we then went for a meal. 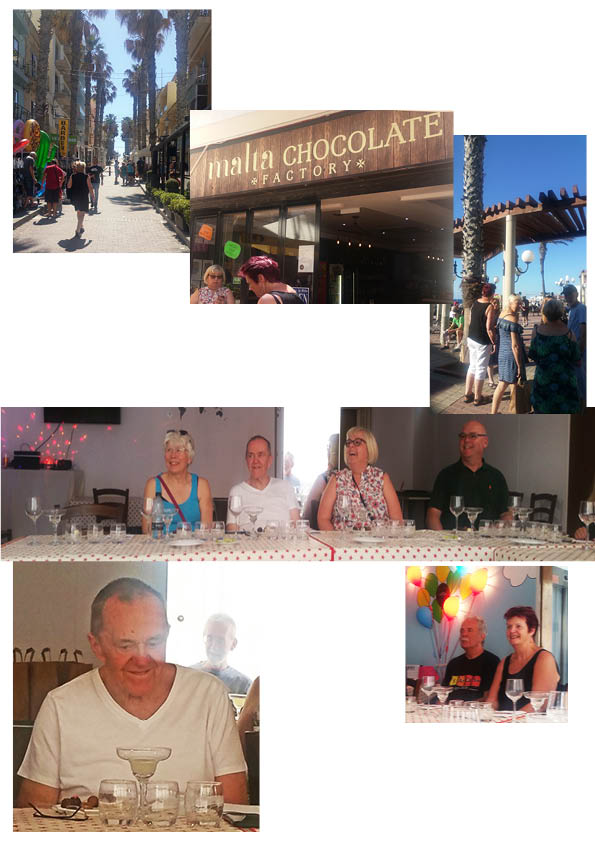 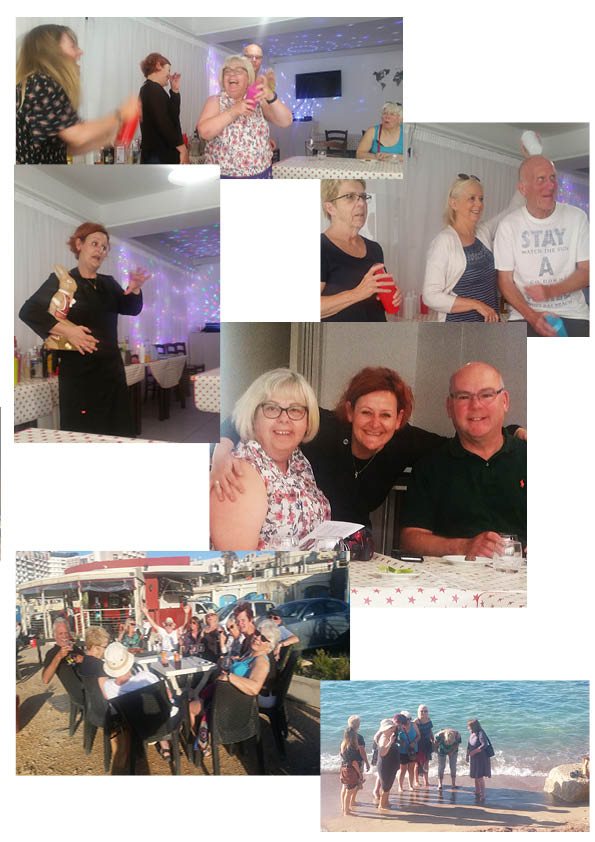 Cities
Valletta and Mdina were tidy and clean with some stunning buildings and great places for lunch. We are not stately home, old building or museum visitors and, given our schedule, hats off to any of our choir who did. Many of us simply sat and enjoyed.
In Valletta we needed the toilet and discovered we had no change. No worries, a local saw our panic and asked if she could help. Her daughter was unimpressed. It simply pays to look lost. Same in Dublin where traffic comes to a halt and escorts appear whether you want to cross the road or not.
Contrast the city order with the tourist north west where countryside and walls looked neglected. There were big holes and building sites everywhere. Many buildings were unfinished - bare breeze walls, toothless and eyeless - sinister looking skulls. Hope they all come alive eventually. A bit like my fitness regime - work in progress.
The gardens and the gun were highlights. 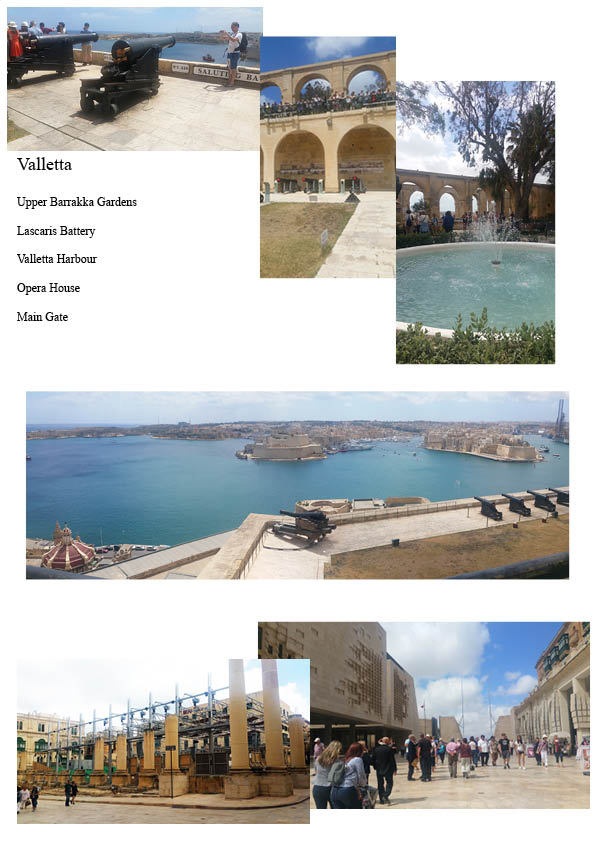 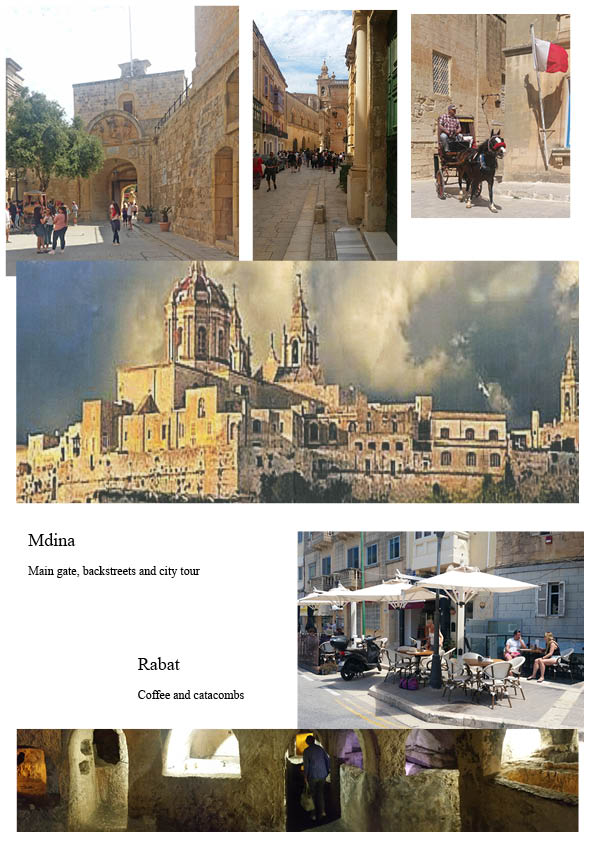 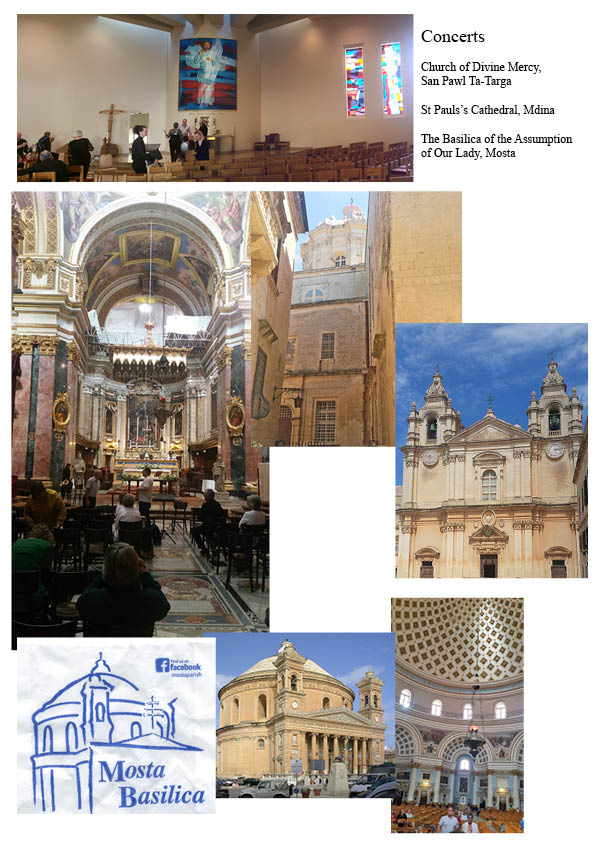 Concerts
Three churches. Two where there were more singers than audience. They were however excellent dress rehearsals for the final Mosta triumph in front of a good crowd. Stunning sound effects. Standing ovations everywhere. Thanks to our soloists and the band. 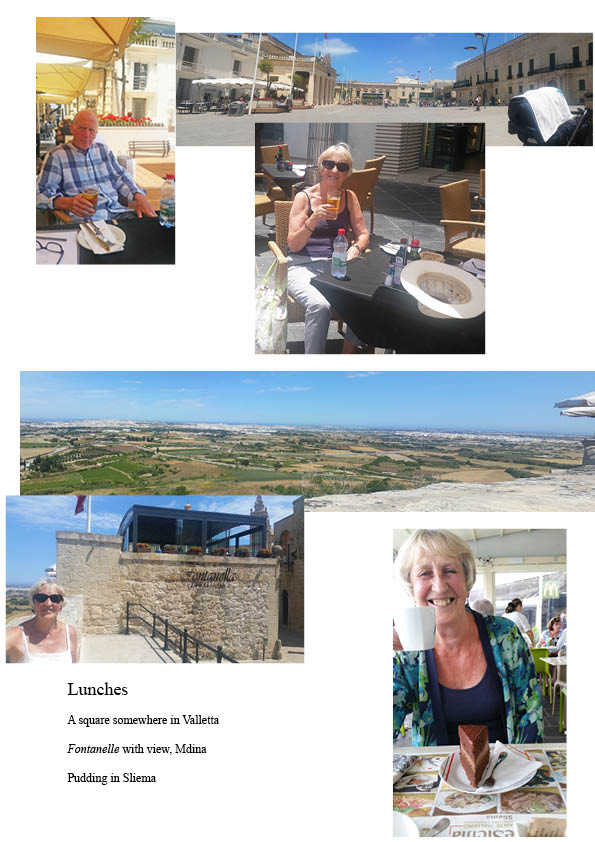 Eating out
The karaoke - we joined in with the 'turn', al fresco dining next to the small harbour. A man, a microphone and a keyboard. I think he was actually next door and down a level. He sang stuff our Honley Ladies knew. In English, they added choreography, seated of course.
One table upped and left within five minutes of our arrival - the diners that is. Another table was even rowdier than us. A Spanish birthday girl plus family and really fired up. They kept peering over at the 'turn', presumably making requests. We all sang Happy Birthday three times. Very loud during the cutting of the cake. As they were leaving I suggested we deserved a slice or two. To cheers, birthday girl gave me half a big chocolate cake in a white cardboard box. Our waitress kindly produced twelve portions on plates with forks. A rich nutty pudding.
Then the 'incident' at the Plumtree. My so-called choir pals kept asking our hostess what vegetables they could have to accompany their meat or otherwise 'mains' choice. Came to me and I ordered goulash. She said "with rice" and I said "no thanks". She said "no choice". My bottom lip came out with silent outrage. The childbride suggested I ask for chips, but I remained speechless other than explaining that my mother's rice pudding was not a thing of beauty. Appetisers came and went and I guess chips were discussed at some stage in maybe something louder than a whisper. My goulash duly came with chips and the table went into uproar - the diners that is. Apart from me who had gone a deep shade of very quiet beetroot. I thanked our hostess profusely and gave her a kiss. She overcame her camera shyness. At the outset, I could have done the adult thing and apologised for not liking rice and "please may I have chips?" But that would not have been fun. 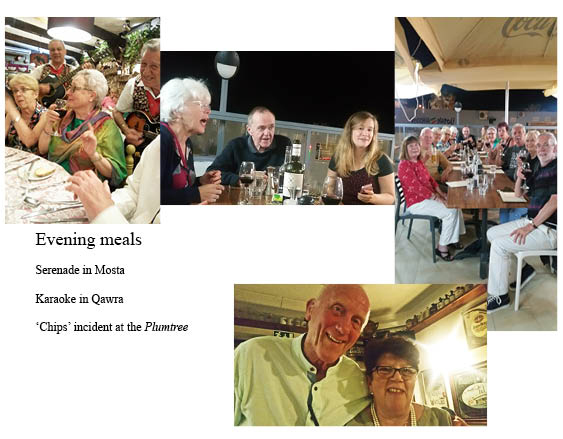 The Answer
I am still no better at Latin or reading music. The support from those around you jollies you along, especially when my musical director was shifted a row forward for the final concert.
For a group of mixed ability singers with a handful of rehearsals, we were brilliant.
I appreciated the opportunity to sing choral - I was good enough. Sadly, I didn't hear the total performance - I was a prisoner of the notes.
Cracking experience with lovely companions in an excellent location.

(Notes
Malta is 50 miles from Italy, so an interesting place for the British to be in WW2.
Made its name as a Naval Base - Phoenicians, Romans, Arabs, Knights of St John, French, British.
Awarded collective George Cross for bravery in WW2.
Mosta has the third largest unsupported dome in the world.
I think the midday gun was originally an aid to navigation - knowing the time was key - now its ceremonial)