Cricket at Scarborough - inspired choice for a sunny Sunday


What does sport mean? Wiki says 'Oxford Dictionary defines sport as "an activity involving physical exertion and skill in which an individual or a team competes against another or others for entertainment"'. I think skill must vary quite a bit, allowing all abilities to contribute. Exertion usually but not always. My boules experience is fairly sedentary.

Elite, good and also-ran. Contact, non-contact or a referee's mixture. Competitive and aggressive. Or, the result is irrelevant and we're all chums. Posh upper middle class. The workers. Amateur and professional. No one size fits all. Most people will identify themselves somewhere along these pieces of elastic.
Not necessarily competing against others. Long-distance runners go for personal bests. Or, they do it to escape. Smith, in Alan Sillitoe's book (see wiki) is the archetype outsider from a dire background with little or no life chances. He finds solace and space for reflection in running alone. Sillitoe is associated with the group of writers known as the angry young men, class their nemesis. Sport prides itself however in the fellowship it fosters. Relationships which can last a lifetime.
Playing or supporting - it gets a bit tribal and tricky just here. I've been on the terraces at The Arms Park and seen Welshmen kick seven shades for coming from the wrong part of Gwent. Who gets upset when rival spectators insist on standing, waving flags and totally obscuring the action? The Welsh rugby fans never lose, they simply score less points. Yet I've met gracious giant defeated Africaaners, in Durban. Drink is often taken, rightly part of the enjoyment, but sadly overdone by some - I'm sure we've all been there. Watching and appreciating is part of getting older for the keen sportsman, though some play on.
So are we left with an activity for entertainment, a definition which seems to include everything - a definition of life then. It doesn't leave a lot for those who don't. Patrick Kidd in the Times, 27th July, reviews Duncan Hamilton's book on Neville Cardus - The Great Romantic: Cricket and the Golden age of Neville Cardus. Cardus writes 'to go to a cricket match for nothing but the cricket is as though a man were to go into an inn for nothing but drink'. Duncan summarises 'to write well about sport you should look beyond sport ... It is about the characters and how the game explores the human condition'.
A mile or so north of Scarborough town centre is a square well-tended field, about the size of four football pitches. Hidden behind a long terrace of boarding houses and small hotels, it sits within a tiered ring of wooden benches which gives way to more supportive seating in front of the coffee room. The view opposite the rear of the holiday accommodation opens out to reveal a hilltop memorial and countryside stretching north beyond the roofs of local housing estates.

A path surrounds two thirds of the square, space for food and drink outlets - tempting bacon baps, pie and peas, coffee, tea, East Coast ales and fizzy lager. A sure sign of civility is the second hand book stall.
Then the more formal architecture - two large black and white twin towers either end of the field, easily-visible thin boxes displaying a series of numbers, decipherable only by the initiated on the wooden benches and plastic chairs. And a large imposing red brick house for 'members'.
In the middle of the large square is a smaller 22 yard track, brown not green, where men in white engage in the gentlemanly pursuit of cricket. This is Scarborough Cricket Club. York was good (see Casuals at York), but Scarborough comes a good second.

Just down the road is another legend - the North Riding - a must for real ale enthusiasts who like their favourite brewed on the premises.

Cricket started life in SE England in the eighteenth century and was a national sport by the middle 1800s. One of its attractions was the money to be made from gambling on big matches between teams sponsored by aristocratic patrons. At Scarborough, The Queen's Club played cricket on rough ground up on Castle Hill until Lord Londesborough, the local big match follower, suggested improvements which lead to the move to North Marine Road in the 1860s. This was when Scarborough was a spa town with sea-water bathing, fishing and ship-building - the railway had arrived in 1845. 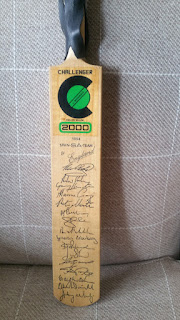 An annual pilgrimage, since our son Chris was a 9 year old when, in 1994, we saw the touring S Africans. To watch Yorkshire CC play anybody, but mostly in the County Championship. This is competitive professional high quality cricket. Nowadays I go with Greg, a fellow Almondbury Casual (see Casuals' history). The Casuals were a social cricket team from Huddersfield. Same rules, same roles, same spirit of cricket, but a tad different in talent and ambition.
Surrey were Yorkshire's visitors and our local Honley opening bat, Will Fraine, made his maiden century against no less a quickie than S Africa's Mornie Morkle. He has now signed for Nottinghamshire.
People pay good money and it seemed like a full house. On sunny days it's shorts and sunhat, a cushion for the bench and a small rucksack for those taking lunch. Twos and threes, chatting, with a scattering of ladies who are more prevalent in the better seats. Then the guys in black blazers and striped ties, hands in trouser pockets, serious, walking purposefully to somewhere, presumably corporate hospitality. Always an idiot or two who make a noise in front of the bar. Interestingly we were the noisy ones at York.
A massive lad sat and obscured our view, prompting a swift move stage left. Later spotted in the N Riding occupying two stools. We visited during the lunch break, but it seemed most of the cricket lovers had decanted there. So back to the ground where Greg couldn't help noticing the barmaid's rather bored appearance as she poured our pints. "Have you not noticed - we've had a great opening partnership of over 100 runs?" "You mean they've run up and down 100 times?" Who was having who on? I think she won.
At tea time we perambulated the outfield. 20 or so games of informal cricket. Lads, brothers, cousins, pals, dads. Plastic bat and ball, 10 yard pitches, wickets or upright clothes toward the boundary. Easy bowling, good bounce, cross bat slogs, improbable fielding, outstanding fun. A lot of these guys will graduate to junior club cricket as it's not played in state schools. Different rules, but great coaching.
Strangely, the following day, we came across two games of junior well-organised cricket on the hard-packed sand by the foreshore, left by the receding tide. Two strips of artificial something, boundaries outlined by cuts in the sand, girls and boys, bowling, batting and fielding, all in their appropriate places. So this was a tournament - a step up from knocking about in the nets or the outfield. We sensed it was organised by the crowds of parents shouting and carrying on up on the roadside and down the slipway. These kids will benefit from having sport as part of their future, their whole lives ahead of them. They will learn the skills and how to behave and be competitive in sports, hopefully transferable into their work and home.
Back to North Marine Road and by 5.30pm and we were done. Plenty of boundaries and wickets, an appreciative audience and a relaxing 5-6 hours.
So where do I come in this sporting complexity? First as a participant - they were still playing cricket and rugby at my boys' grammar school (1959-66) where life chances were good for those who went for it. Still had to pass the eleven plus. I gave up cricket in the second form -  the sports master kept picking me for the age above where nobody spoke to me. I returned in the sixth form to supervise the second XI. When son Chris gave up a promising club cricket career at 17 it was a reminder of what might have been (see Chris to 34).
As a medic, I gradually moved into the officer class, keeping my shoulder chips nicely polished. Retired at 60 and 44, cricket and rugby respectively. Finished in highly enjoyable festive teams, rugby vets and social cricket. On reflection that seems to have been the point. Despite belligerence, I shared the craic with a passion. Talented yes, but full of distraction. And so it continues as a supporter. Intermittent and enthusiastic. With some fellow players from the sixties, but mostly with pals from those later less competitive days. The happy few at 72.
Sport has been a mirror, the other half of the bumpy ride. As Duncan Hamilton suggests, sport helps reflection on what it is like to be human.