Huddersfield Historic Society featured the Tolson Memorial story last night down at the university. A sad film of two young men killed in the first war, as told in their letters home and the letters of their commanding officers.
I lived in Waterloo in the 1950s-70s and Ravensknowle Park was our playground: toddling in the pond then football, cricket, touch rugby, parading with the girls, a spot of courting maybe. We assumed it must have belonged to a rich guy who handed it on when he died, for the use of. Which we did. Little did I know until 50 years later that it was and is a war memorial.
A memorial garden was opened in 2014 and dedicated in 2015. A Friends of Tolson and Ravensknowle project with Heritage Lottery funding. 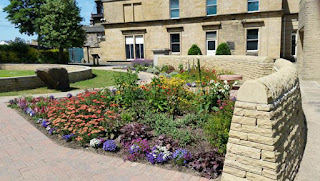