This winter cruise was a continuation of a routine me and Pete had got into as part of our share of 57 foot Sapphire. We needed a hire boat however. The bottom of the narrowboat food chain. What is there to say about cruising the Leeds Liverpool canal in early December?
Foolhardy is most people’s first thought. Not if you have experience of driving and managing locks and stuff. Winter doesn’t make a lot of difference and the four of us were veterans, or thought we were. Each time we come though we have something to relearn. It soon comes back. And there is always room to learn something new - a real issue on this trip.

A second thought. Isn’t it cold? Yes. Our previous winter trips had prepared us for this, especially last year on Sapphire down the Middlewich Arm of the Shropshire Union to the Badger at Minshull. The barmaid was curious as to why we would choose the coldest week of the year for a holiday. Good question. Easily answered by the roaring fire in the back room and four pints of Black Sheep. We had the room to ourselves and a free rein on refuelling. And yes it was also cold on the Leeds Liverpool. A crispy blue skied coldness with clear far reaching views of lowland fells, winter fields and farms.

A final question. Hadn’t we something better to do with our time? No actually we hadn’t. Even in retirement we challenge our routines and commitments. Families, dogs, choirs, charity fund raising, hens, fitness sessions, housework. Need I go on? The list can be endless. Who did all these things when we were at work. We did. And we’re still doing them as grandparents. Stressful for some, needing time to refresh.

Despite these reservations off we went. Two stages. North east towards Barnoldswick and back. Drop our wives off at the station and just the two blokes down to Bingley for the last three days. Or so we thought. I received an email the day before we were due to go. Gargrave, an interim stop on our opening outward leg, was shut. You’re booked through Bingley manned five rise locks on such and such a day, back three days later. Okay, sounds like a plan. Except the dates. They were expecting us Monday but we were aiming for tomorrow, the Friday before. Big mistake on the booking front. Ouch! My dreaded hoodoo had struck again. Frantic phone call to the boatyard. Can you bring us forward? Half and hour later and yes they could. Your Bingley bookings are now these. Great, a life saver, for me anyway. Just what would we have done without that email?

Sadly this was an echo of things past. A self-adjusting one. Like the Ryanair flights to Italy. They emailed us to say the flights had been cancelled, for me to discover I’d booked the wrong dates. Would I like to reschedule? You bet I would. What about the wrong week on Sapphire with Pete and Jean, the same crew as this week? We had a brilliant time in Scarborough instead. The show in London two months hence I’d reserved for the same night I was booking. Jersey Boys. They gave us great seats. I’ve stopped counting the times I’ve bought two of stuff off Amazon. I now don’t buy anything expensive, just in case. I try to keep the childbride behind me on these occasions. Obviously not foolproof, with the emphasis on fool. 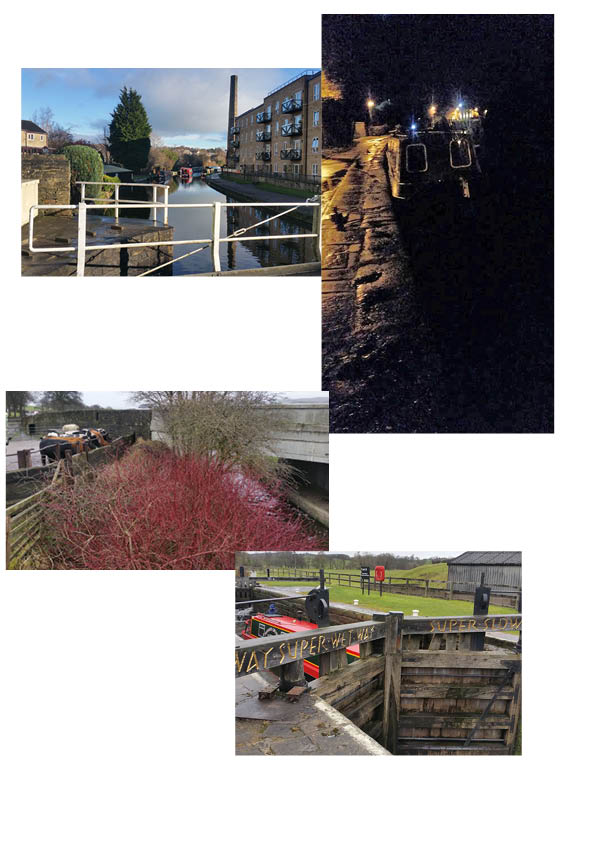 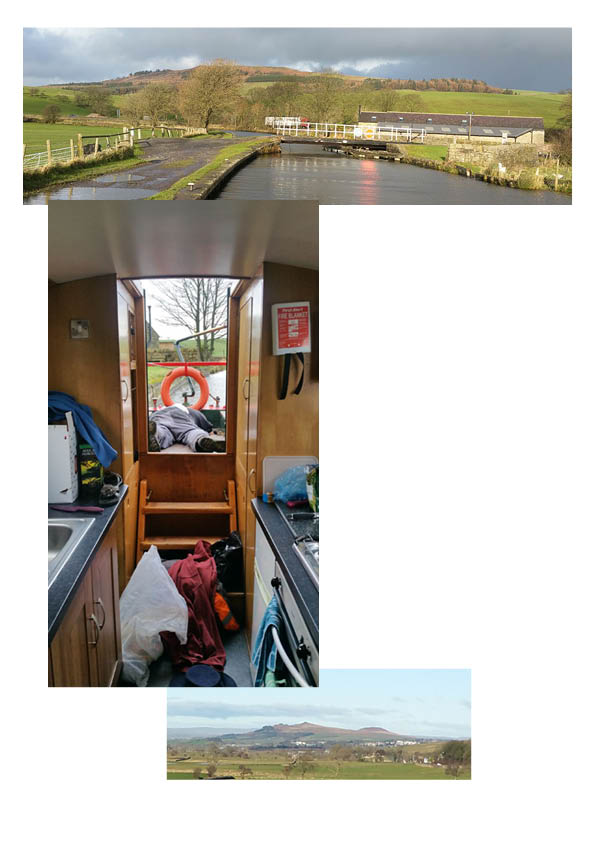 At the boatyard we were informed Gargrave was open, so we reverted to our two stage plan. Friday afternoon we only had time to go through the automatic swingbridge, park and stock up at Morrison’s. Despite central heating and solid fuel stove full on, Jean was frozen during the night, but put on a brave face the following morning. Back to the shops for a hot water bottle. Saturday lunchtime and disaster. Just beyond a swingbridge, Pete tried to hold the boat while we got back on. A gust of wind and grounded. Not difficult on this canal. A struggle and we were off. The engine cut out and wouldn’t restart. Back to the side. The middle rope looked a bit tight. We couldn’t shift it, wound under the boat and presumably around the prop. Into the weed hatch, access to the propeller, engine off, keys out. Yes a rope, but something else. Barbed wire. Thirty minutes wet and cold and no joy and multiple finger bleeding points. Phone call to the boatyard. Oh dear, the boss is in Leeds, I’ll ring you back. May as well have lunch. It’s lovely out. Two and a half hours later the boss returned from another boat which had failed to start. Gloves, courage to use the engine whilst not down the hatch, experience and he was done in no time. Great and many thanks. Barnoldswick had by now faded into the distance. 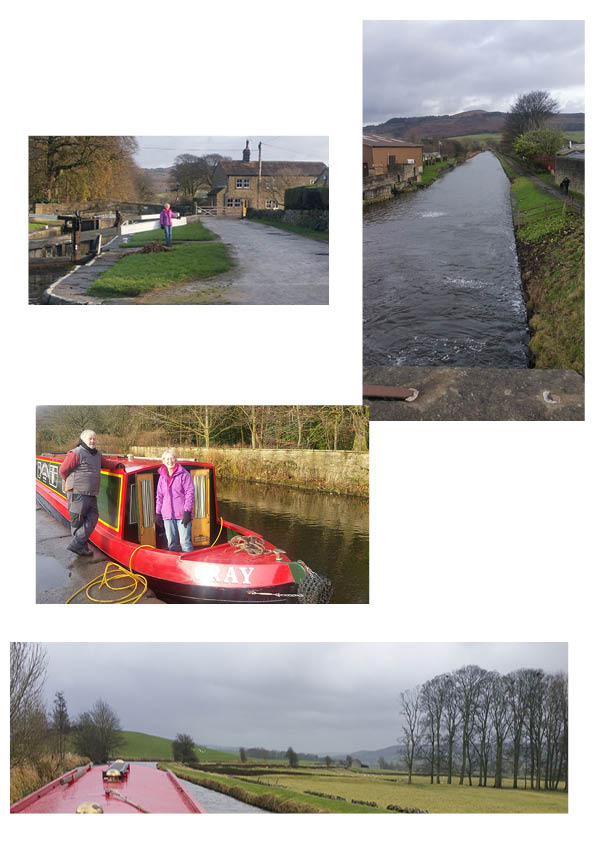 We made the approach to Gargrave in the hour of sailing time left til dusk. We two blokes decanted to the Masons Arms to watch Wales have a go at the Blacks without much luck. Gargrave proper the following morning. Here I did something I cannot remember ever doing before. I left two paddles open on the lock gates. Canal crime of massive proportions. A waterboard person was parked just up from the winding hole and I stood corrected and ashamed. She spoilt it a bit by closing them herself rather than simply pointing out our error. Double whammy when she tried to give us a tutorial on reversing - “Thankyou” I said three times in between her bits of advice. She took the hint and went back to her newspaper. Her advice was on the money however, but I just wasn’t in the mood. Pete was driving and polite. Didn’t say “Eh” once.

We weren’t going anywhere. Forward were a dozen locks and more, up one day down the next. No fun there, so we did what we used to do in college on Sundays. Got the papers, stoked up the fire and blobbed. Cold and sunny and rolling hills viewed through the windows. O happy boat. 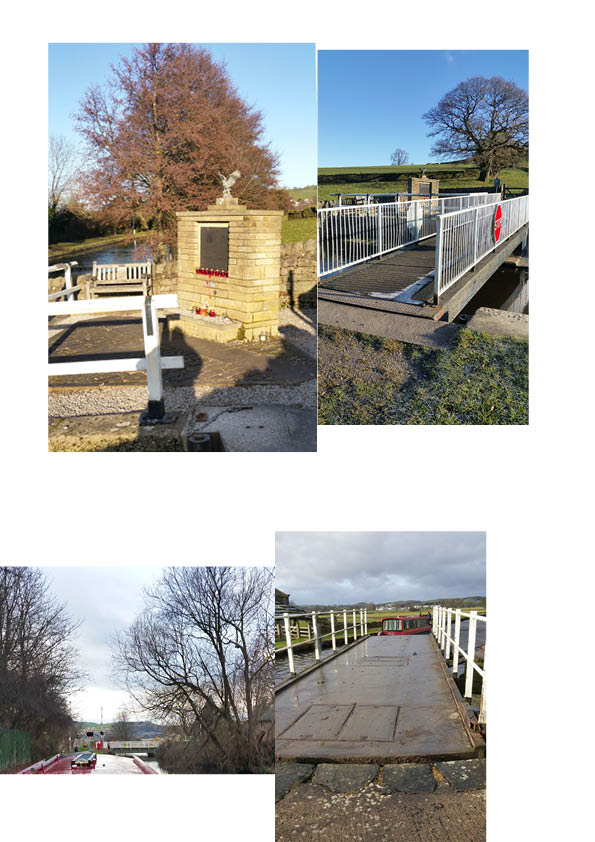 More or less warm that night. Leisurely progress back to Skipton on Monday. A total of eight miles in three days. The wives caught the train home Tuesday morning. Pete and I departed for Bingley, not quite to five rise locks. This proved to be trial by swingbridge for me, a breeze for him. He hobbled dramatically, especially downwards, steps and slopes. Two replaced knees that need replacing and I’m the muscle. Getting the fire in, cooking bacon butties, making coffee, on and off the boat, on and off the boots and I’m blessing him and those bloody swingbridges. How many were there? Double figures certainly and to be done twice. Most were manual. The ones with roads and cars, about a third, were automatic, but were they? A waterboard key turned in a large grey box to set the warning lights and siren off. Barriers down okay, except the ones I had to do myself. Cars stopped. Then bridge swinging on automatic. Okay except for the couple I had to do myself. Boat through and reverse the process. So not all automatic then. How did I discover the variations? There were instructions on the top of every grey box and frantic specs on to read them when a bridge didn’t work. Then the two or so occasions I’d done everything and they still didn’t work. To keep the electric sequence going, manual barriers and bridges as part of the automatics had to be engaged solidly in their housing at the end of their swings. A good old clang. On the manual bridges if you did this I got a bounce so I’d learned to slow up. The penny soon dropped that I had to take a run at the manual bits. Managed somehow and no complaints from drivers.

The all-manual ones were tougher but more predictable. For walkers, sheep and cows. They were all held closed by a chain attached to a fixed point on the bank. The chain was guarded by an anti-vandal handcuff. You’d think handcuffs were for vandals. No, these were for anti-vandals. You’d also think the bridges were far to big and heavy to be vandalised, but I guess the farmers wanted them to stay closed. The chain looped back on itself around a strong metal piece of bridge, through the cuff, which was then screwed firmly shut, using another water board key. The key ring had two keys and a spare, for the toilets, and a cork float, in case you chucked the ring in the cut. These got all tangled trying to turn the cuff screw, both to undo and redo it. And access to the cuff was a lottery. Upside down, to the side, behind a railing. The chains tended to be tight, so if the bridge had bounced a touch screwing up the cuff was impossible. I took some pride in getting the hang of it, along with some supportive language, achieved in beautiful weather which for the most part I was able to share with Pete. 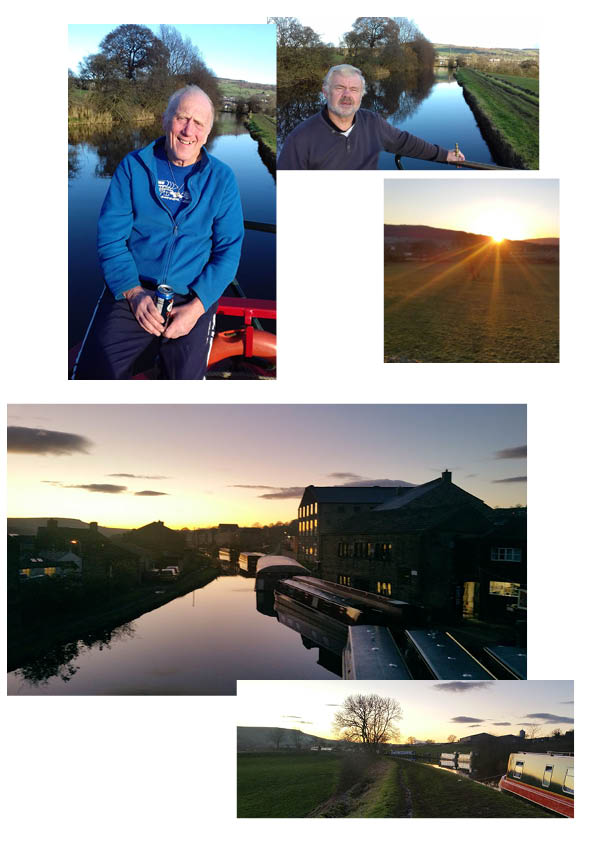 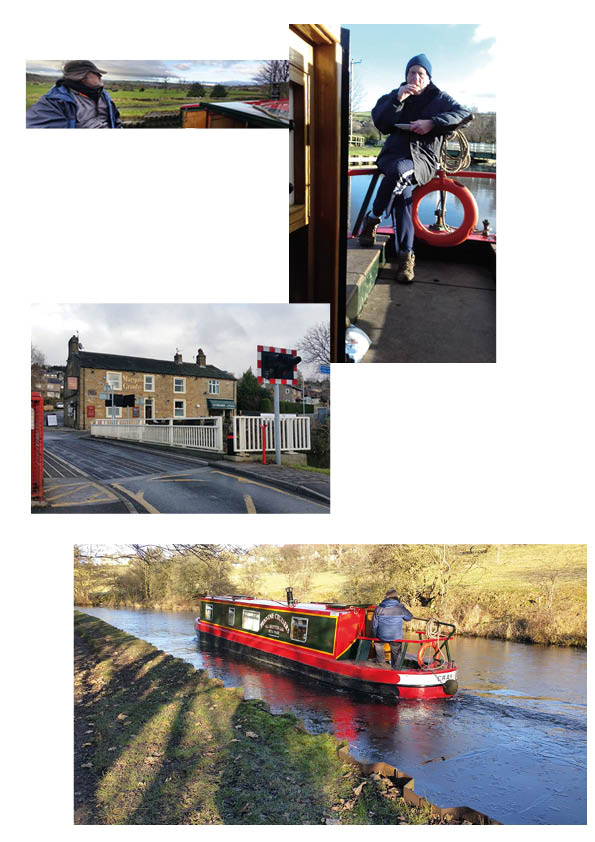 Down in Bingley we needed water and a winding hole. Both in the local boat club, separated by guess what? A swingbridge. Crossed by members of the club, so keep it closed or else. Pete grounded again, and an old scrote gave some advice through his central hatch. Pete would not have heard. Watered up, backwards through the bridge, winding hole a bit tight between two club boats. Obviously the rule of no parking in winding holes does not apply to the privileged. A club boat decided to pull out. It must have been pretty obvious that we were pointing the wrong way. I trudged up to engage with the woman. Somehow I negotiated we would go first. Pete did it well. We set off, passing said club boat, bloke at the helm ignoring me. Well I ignored him too. We were a hired boat, less than the dust.
A couple of decent pubs on the way. The Marquis of Granby was hospitable, big fire and Osset Brewery’s Silverking. The Robin Hood in Silsden was not Pete’s favourite despite a decent fire. Too many rough looking blokes enjoying happy hour. Builders who swore a lot. But a good mooring out in the wilds which was near enough to the pub. Sunrise and sunset were stunning.
Cold blue trip back to Skipton, swing bridges in reverse order. Icebreaking with a sound track. Tinkling near the bow on first touch, then loud cracks as cracks penetrated to the bank. Ice shards pinging across the slippery surface.
The boatyard staff could not have been more welcoming. There was a big list of things that hadn’t gone well, but being out on the cut and sailing longish days is a challenge and a pleasure. So a bit of a balancing act. More of a pleasure for me, but whether we do it again in winter has no answer.