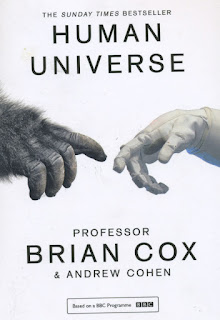 For me, as a scanner of text, Brian's detail was largely incomprehensible. Like Bryson's A Short History of Nearly Everything, the numbers are unbelievably colossal or minute. No sizes in Cosmology or Particle Physics are everyday - a pint, smidge or a teaspoon, though you could get squillions of particles in each. However there were plenty of accessible conclusions and great quotes, for example 'What is a human being? Objectively, nothing of consequence ... I don't understand it. Nobody does, but it makes me smile.'
Apparently the natural world is orderly and simple. A small set of laws covers everything, as Clive tried to explain to me one Sunday between Aida and Nabucco. Brian concedes the outcomes are rather complex. The journey of life has been precarious, from the first multicellular organisms to the birth of farming, the development of writing and the first man on the moon. Brian is a cricket fan. The 42 laws of the game were written down in 1788, yet no two matches are alike. Simple framework and complex outcomes.
The single episode beginning, give or take a billion years or so, reminds us of Genesis, the biblical one. Human origins in The Rift Valley, S. Africa is a Garden of Eden moment. There are plenty of historical figures who got involved with religion and the stars, often not doing so well, Giordano Bruno being one of the most famous. In 1600, he denied the divinity of Jesus at the same time as believing the universe to be infinite with lots of habitable worlds. Burnt at the stake for his honesty.
Hazardous episodes occurred during the making of the TV series, Siberia and serious diving to the sea bed for instance.
There is no God debate in the book. Brian does venture into politics, mostly about the funding of Research and Development and, crucially, Education. And they could be funded by Wayne Rooney’s salary. On the one hand we are looking at nuclear fusion for cheap unlimited energy and on the other we are still killing each other.

Brian writes ‘Science and reason make the darkness visible,’ explaining the multiverse and our place in it.
Seamus Heaney writes to explore himself, ‘I rhyme/To see myself, to set the darkness echoing.’
Posted by David Walker