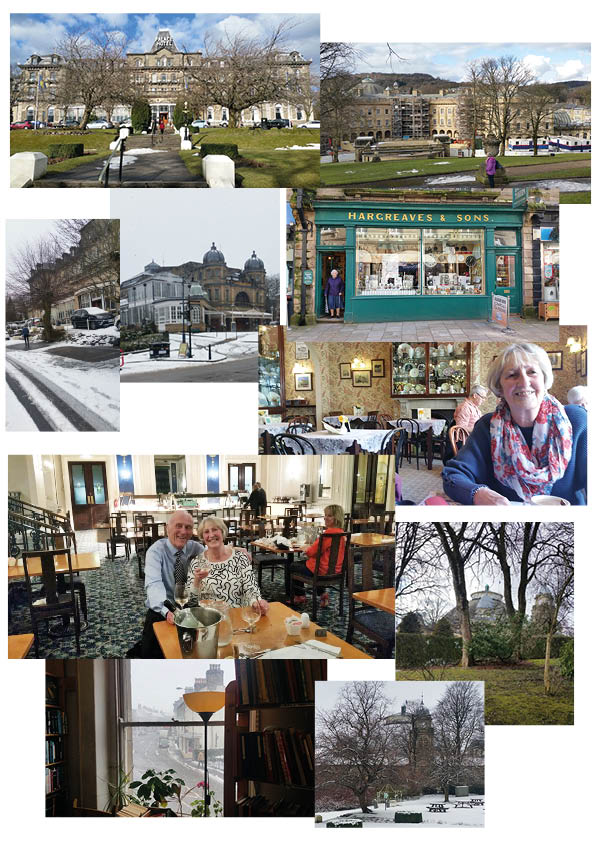 An overnight stay at a posh hotel. The Palace - 1868. Described as a tired by some. We went on an offer and were well looked after, though the mass catering resembled a holiday camp at times, especially as the dining room is ginormous. Everyone had left by the time the shot above was taken. I'm a veteran of several Butlin's trips, so on this occasion I do know what I'm talking about. The breakfast coffee was to die for - had I drunk more than one sip I would've. Quick, let's go to Nero's.
At the other end of the scale - Hargreaves Tea Rooms. Genteel spot with display cabinets full of crockery and bronze busts of The Queen and Prince Phillip. Black and white pictures of former Buxton glories.
The Crescent is finally being renovated. Isn't the dome brilliant, even in snow?
No concert at the Opera House this time - boo.
It snowed, a lot. A blizzard to be precise.
Scrivener's, with a view through the window of snowy Higher Buxton. A great book shop on 5 levels. Nooks and crannies, odd staircases, little seats in corners to rest and read. I was again overwhelmed by choice, and hadn't the energy to browse. The proprietor told us she nearly bought Holmfirth's Daisy Lea. I don't know why she didn't, though I think she told us.
Very brief look at expensive clothing clobber in Potter's window of Little Dribbling fame.
The childbride was chuffed with her birthday trip and gifts.
We came back via Chesterfield. Holme Moss was shut.
Posted by David Walker