Shallilo goes to Alnmouth on the Northumbrian coast 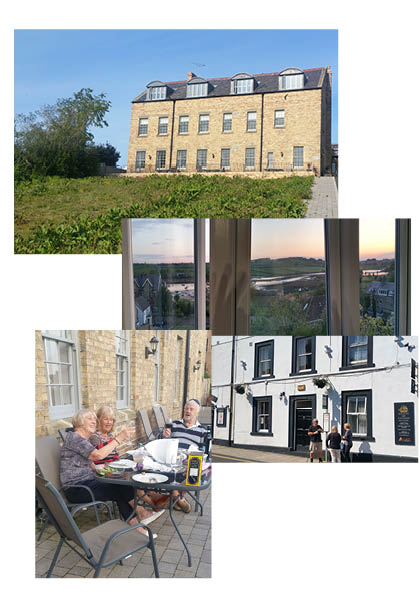 Away again for the weekend. We do 'Magic' rugby most years and our third year in Northumbria (Easington Colliery and Whitley Bay previous). We had the top floor of this Alnmouth apartment, complete with evening view of the estuary and exclusive use of the patio for a bbq. The portable bbq never lit properly. I wandered over to a community event near the river and they donated coals and we were away. Walk on the beach and finished in the 9-hole golf club house. Surprisingly welcome and hospitable.
Waiting to go to Alnwick outside the Schooner Inn. Being thrifty, we travelled by bus and train. In between destinations lie green fields, ploughed fields, hedgerows, cattle, sheep and farms for what seems to be miles and miles.
According to Wiki, Alnmouth village was once a port with a small fishing industry and some trade (export of grain and other foodstuffs to London; import of timber and slate). The port declined at the end of the 19th century - shifting and silting of the estuary and the growth of the railways. Alnmouth is now a resort and tourist attraction of 'Outstanding Natural Beauty'. 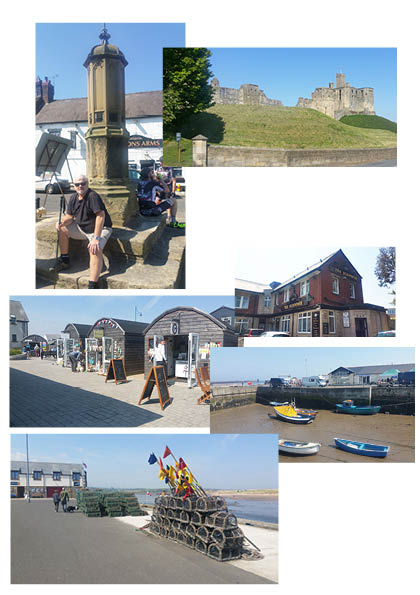 Wiki writes that Warkworth is noted for its castle, originally built of wood in the mid 12th century. Granted to Robert fitz Richard by Henry II, it was improved by his successors and featured in the Anglo-Scottish wars (medieval wars of Scottish Independence). Now managed by English Heritage. We didn't stop long.
Amble, on the river Coquet, was a coal town from the 17th century (outcrops of coastal coal between it and the Tyne) and exporter of coal when deep mines were sunk inland and the railway came (19th century). Today, there are large broken wooden staithes and breakwaters which signal older harbour structures. There was also fishing and boat repair works which continues today. It is lifeboat station and popular market. We had a couple of pints in another Schooner Inn before eating a pie surrounded by wooden 'pods' which made up the market. Pleasant enough. Warkworth Castle is a distant landmark. 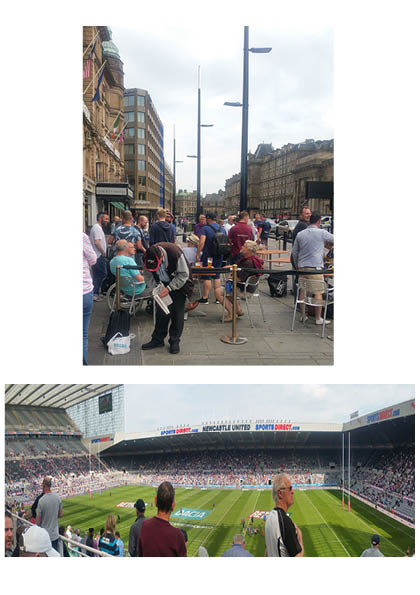 The real reason for going was of course 'Magic Weekend' at St James' Park, home of Newcastle United. We beat Wakefield in a tight finish. Hosted by the 'Platinum Club', an exclusive matchday facility without queues for the bar, but with civilised toilets and cushioned seats. What had we done to deserve that? The outward train was delayed at Alnmouth due to an electronic break failure, fixed by a telephone call to an engineer - it's all algorithm. We had a couple of pre-match pints (Tyneside blonde which I incorrectly called Tynemouth blonde followed by exasperated barmaid) with a group who were speed-drinking shots and pints of Guiness. St Helens supporters waiting for their train which they, hopefully, caught soon after this pic. Despite all the doom and gloom about railways, I mostly have a great train travel experience. And Warkworth Castle was clearly there again, and seemingly quite close to the track. 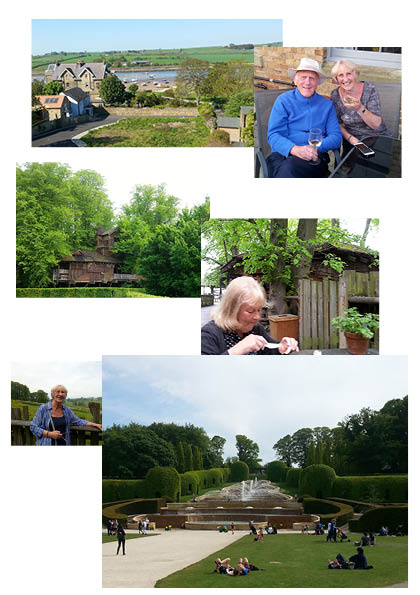 Childbride's pics, mostly from Alnwick Gardens, the girls' trip while we were in Newcastle. Cascade, reminiscent of Chatsworth, and the treetop restaurant where someone enthusiastically tucked into a cream tea. The gardens were reportedly lovely, first laid down in 1750 by the 1st Duke of Northumberland, who employed Capability Brown, the celebrated Northumberland gardener. The garden now belongs to a charitable trust. The 12th Duke of Northumberland donated the 42-acre site and contributed £9 million towards redevelopment costs.

Great weekend. Northumbria is an excellent place to visit.