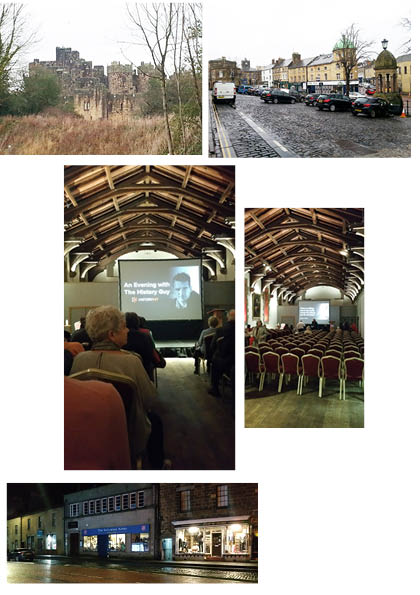 The latest in our sleepovers - Alnwick, Old English for dairy farm and settlement. Origin around AD 600. Its history is mainly that of the castle, built following the Norman Conquest and well known for being the seat of the Percys and their conflict with the Scots, their battles with English monarchs and involvement in the Wars of the Roses.

Wet March. Lunch in Bedale. Very twee tea rooms with a good wholesome menu and cakes in a display cabinet. Very North Yorkshire. They did chips though. Alnwick by mid afternoon, getting lost around the massive castle as we checked where the entrance was for the evening talk. We didn't need dinner - the hotel menu looked a big step too far - but we did need a taxi to take us to the castle in the pouring rain.

Dan Snow, the history man. His talk was in four parts. First, life with dad and holidays at various sites of history (his own 2 year old is now similarly burdened). Second, BBC programmes. Third, people he admires who have achieved major things in the last 50 years and are not household names: a scary RAF fighter pilot and flight (it's a box now, not a loop-the-loop), the NCO who was honoured for putting a Union Jack on his radio antenna in the Falklands, ladies from the WW2 intelligence services. Fourth, a history of the castle.

Walked back to the hotel in the dry, past The Salvation Army charity shop. Famous for selling me a pair of trousers which were far too small when I got them home. Echoes of wearing my son's cricket trousers in the fixure Almondbury Casuals v Eggborough. I bought the Alnwick pants during one of the trips off with Big Dave, a weekend when strangely, Alnwick RUFC played Huddersfield.

The morning after was the childbride's birthday. I've treated her to two Sir Cliff tickets at the open air theatre, Scarborough - June 2019.