A week away on the south coast - somewhere we rarely visit and now we know why; it's too far. So the theme for the week was travelling. Topped and tailed by six to eight hours of driving. Down the M42 there was a car on fire and the whole motorway was gridlocked. Then very slow around Bristol. Back up the country, different route, just volume of traffic and overall quite pleasant. Loo and drink stops. Once we had arrived in Weymouth, had a beer and relaxed we determined the journey wasn't going to colour the holiday and it didn't. We were in a far better temper when we got home.
In between times we went everywhere by bus - why not it's free. There were loads of them - covering all the local destinations and obligingly frequent. Occasionally we needed to change. Once, we transferred instead to a boat to view the Jurassic and Cretaceous coasts. Great views of the World Heritage Site which doesn't allow residential protection - some very expensive houses will eventually fall off the cliff edge. We caught the boat in the working harbour, surrounded by pubs and restaurants. Danny the dolphin swum past as the jet skiers set off. My favourite spot of the holiday. A seaport since 1250s despite modernity you sense the history. 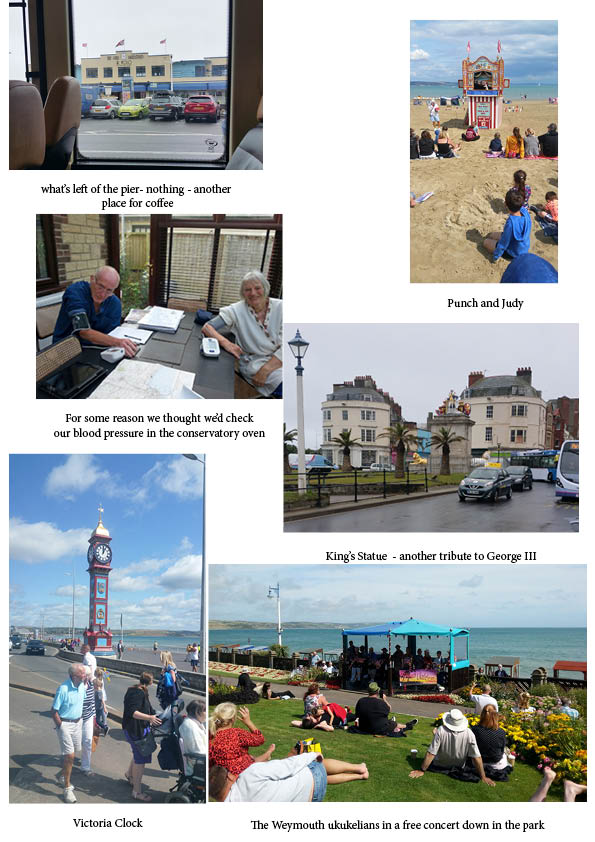 The bus trip to Weymouth covered a lot of the attractions. All ages catered for. Massive beach, mixed shingle and sand with breakwater and path. They are forever reinforcing the sea defences. Sea life centre which researches seahorses. George III patronised the town's Royal Hotel. He has a colourful statue in the centre next to the bus stops and a chalk horse-rider carved in the hillside at Osmington. There was a pier until 1982. Sand sculptures occupy an odd-looking building on the beach near to a super Punch and Judy show. A couple of fairgrounds and a busy theatre. Plenty of pubs, coffee and chip shops. The Georgian housing along the sea front is the town's signature. Judith and the childbride joined the crowds for a concert in Greenhill gardens - Weymouth Ukulelians - I watched England beat Wales on TV which sadly had injuries, just before a World Cup. 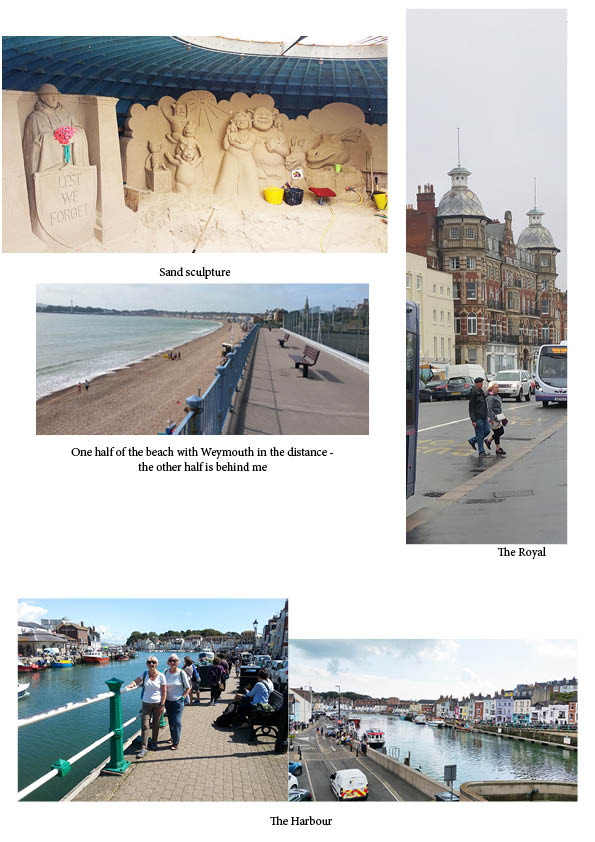 It gradually dawned that this must be the worst town for traffic we had come across. In the holiday flat we were aware of the constant nose-to-tail swish of vehicles. We recognised how long travel times were for such short distances and from the pavement, the fumes and pollution were pretty obvious. They didn't penetrate the flat which was more than adequate, though the glass conservatory needed rigorous ventilation before we could use it.
Two wet days. Dorchester has a strange welcome at the museum. It is £17 for a year's subscription and that's it. So we didn't get to mug up on Thomas Hardy, Judge Jeffries' bloody assizes or the Tolpuddle martyrs. Better in Weymouth, down near the harbour and £2 entry fee. Sections on the railway - double track to accommodate the wider Great Western. Several breweries. Black Death arrived here in 1348 - the first port of entry for the UK. Lots on Weymouth's great and good. For example Wren was the MP in 1702. He designed St Paul's Cathedral using Portland Stone, the quarries being under his control between 1675-1717. Don't forget the thousands of American soldiers who left here to go to Omaha Beach, Normandy, in 1944. 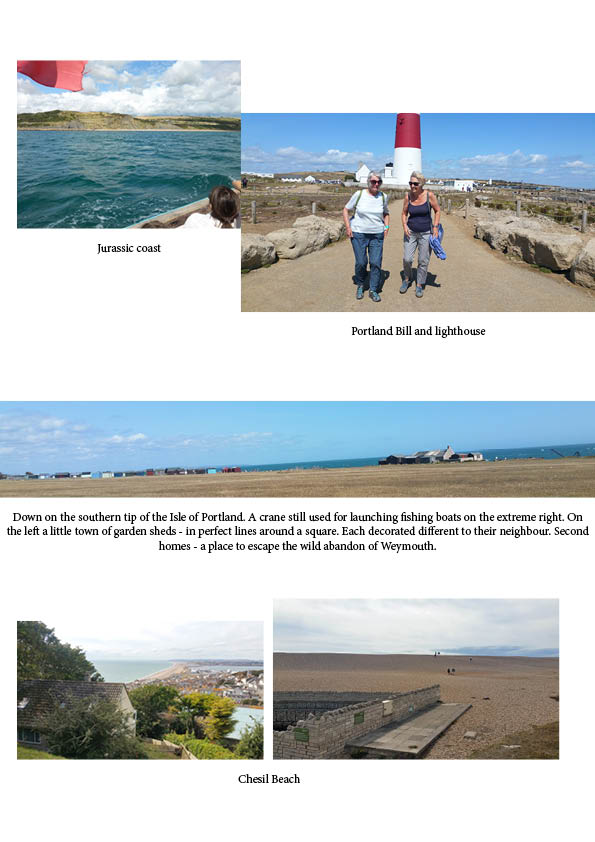 That leaves Portland, harbour and bill, connected to the mainland by a narrow causeway, part of which is Chesil Beach - 18 miles long up to Bridport and 50 feet high - a massive natural feature constructed by thousands of years. Tennis ball shingle at Portland, peas at the other end.
We had our best change of buses on Portland. We asked our first driver to drop us off at Chesil Beach. He preferred us to catch up with the Portland Bill bus. He jumped off and ran across, got the second driver to open up and take us on. "Have an hour at the Lobster Pot," he said. This a cafe on the southernmost tip next to the three lighthouses, only one of which still works. Misinformed about the timetable we had a lot more than an hour - pleasant in the sun overlooking the channel.
The second driver was actually a bonus as he was also a guide. Switched the engine off, stood on the stairs and talked, twice. The London Cenotaph is Portland Stone - dug out from an exclusive quarry which shut down straight afterwards. Portland has 14000 residents, many of whom have never been to Weymouth. The roads are all wide to facilitate dragging large pieces of stone about. Used to construct Portland harbour - by convicts. Now the forth largest man-made harbour in the world. It has been a naval base along with Special Forces training, today on ex-Falkland ship Tristam, torpedo testing and lots more too numerous - same with the its use today, though special mention for the 2012 Olympic sailing regatta and regular cruise liner stopovers.
Janice Turner in the Times August 17th asks the question whether 'Bucket lists are killing the places we love?' Her point being if everyone does it then holidays become a series of queues - eg. Mona Lisa viewing is restricted to a certain duration because of numbers. We experience this in every airport we visit, thankfully getting less often. Weymouth above was overwhelmed by cars and buses. Scarborough over the latest bank holiday was gridlocked both on the roads and the beach. Admittedly different reasons for having a break, but similar outcomes. She concludes that experiences are not about where you've been, presumably so you can compete with your friends and relatives, but how you enjoyed the time with loved ones and the odd stuff that just happens.
So Weymouth did have its queues and it is a long way to go. Really hot too - a heat wave. Three things for me. The working harbour and a lazy afternoon watching the sea from Portland Bill and listening to a bus driver commentary, in the company of the childbride and our pal Judith.