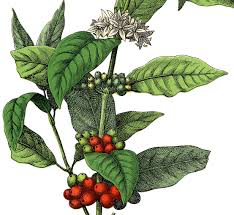 The story so far thanks to Melvin  16th century discovery of coffee in Ethiopia. Spread to Europe in the 17th century where coffee houses begin and then, in the 18th century they flourish as cultural, political and business meeting places. Dutch East India company promotes Java as the main coffee producer, taking over from Yemen and the port of Mocha.

Reading on  As coffee became more popular in Europe, so the production of coffee centred on the colonies. The French were the largest. In the 1770s, Martinique and San Domingue (Haiti) produced over half world's coffee supply, using slave labour. The French Revolution and the enlightenment lead to the emancipation of slaves resulting in the first black republic in Haiti. Coffee production fell drastically - 1000 plantations were destroyed. The industry couldn't get going again as the rest of the world refused to do business.

There were many criticisms of coffee drinking. People should be working and not talking (apprentices and law students). Hard currency was being wasted on a luxury which had no nutritional value. It caused intoxication, bowel obstruction and impotence.

Coffee drinking declined during the19th century. Tea became more refined as the Royal Family began to drink it. Tea could be drunk at home, presided over by women. Dutch East India company was doing well with coffee so the British East India company put more effort into tea. Coffee houses had become elitist. Exclusive coffee houses began to fail as merchants moved out of city. Coffee became a working class drink, bought from shacks and carts on the streets. The Temporance movement promoted coffee to try and reduce working class alcohol consumption. So a major cultural shift.

America was the first mass market for coffee. During the Civil war, the confederates especially drank coffee all day. The generals were happy to keep their soldiers alert. A daily ration was anything up to 10 cups. On demobilisation this demand continued and it was also the time of expansion out west - cowboys and so on who created further demand. This was met by the technological development of coffee roasting. In 1873, industrial roasting began at Arbuckles in Philadelphia. By 1913 over 80% of coffee drinking was of brands.