Taken before his time. 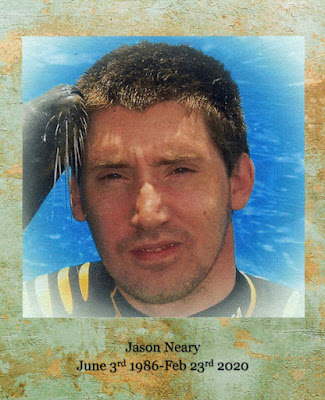 We went to Jason's funeral last week - me, the childbride and Andrew. Lots of devoted family and friends.

Jason died in his sleep. 30-odd with most of his life left. We can only assume a 'heart issue.'

Andrew, Jason and Luke were computer gaming pals. They met most Thursdays in Andrew's Longwood flat. All three had some form of disability, presumably somewhere on the autistic spectrum. Andrew and Jason became close when they travelled with Jason's parents to Blackpool and Wales. There were plans for later this year - Scarborough with us and more Blackpool.

Jason was buried at the Birkby natural site. It is beautifully turned out on sloping ground. Some lovely things said by his uncle. Andrew was given a rose to throw on the coffin. A poignant moment which he managed well.

Grief is a difficult thing, especially if life doesn't make a lot of sense at the best of times. Death must seem pretty pointless.