Awaydays - Falkirk to Linlithgow - and back. June14.2

The idea was to collect a trip through the Falkirk Wheel to complete the 'double' with Anderton Boat lift. Success, though our overall trip met with difficulties, especially meeting up with Joan & Big Dave, friends from Northallerton since the early 1980s and long-committed Linlithgow residents since. Each day Dave and Joan doggedly pursued us for drinks and meals. Not a lot different from the scrapes we've had over 40 years. 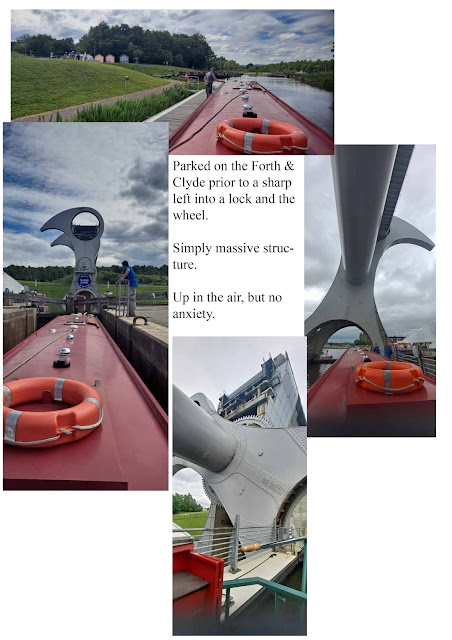 5 days (only 3 and a bit actually cruising). Putting the narrowboating clock back. A long way as it happened - mistake followed mistake. Finished better, but nowhere near perfect (we never were). I bumped the trip boat on the wheel. The childbride got the stern rope in a right tangle - the trip skipper gave us a rope and knot tutorial so we missed the outward wheel. 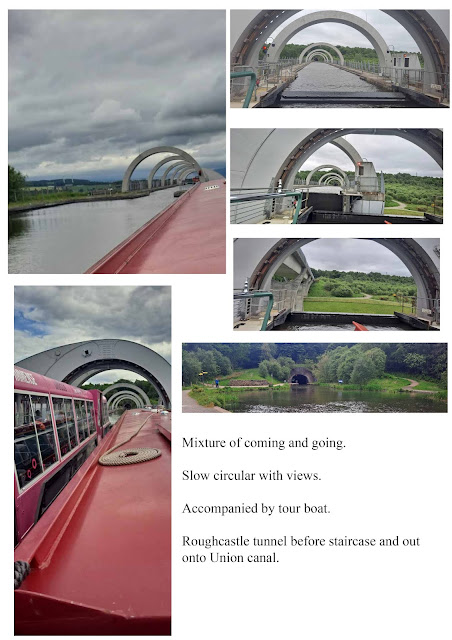 It's a modern wonder. Massive. A giant prehistoric raptor. Dominates the surrounds. The approach from above is a series of concrete arches - a scifi funnel. Any self-respecting satellite would easily achieve orbit. Roughcastle tunnel lit with tacky christmas lights. Another tight turn into a staircase (the locks empty into each other) and onto the Union Canal. 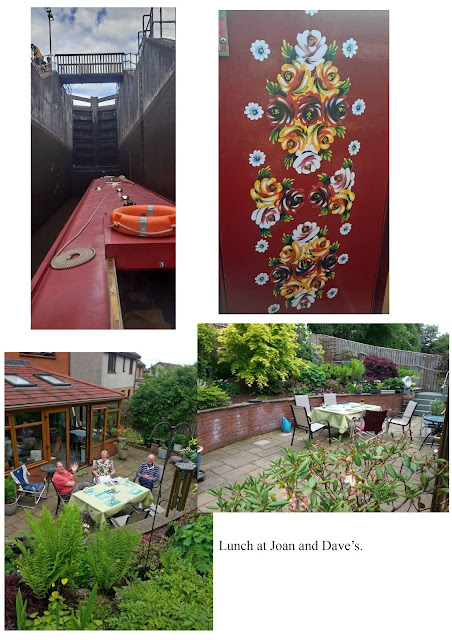 It was Joan's birthday and we were conscious of getting on having spent well over an hour wheeling, tunnelling and locking. Sadly we were already behind with a good two hours to Linlithgow.
Strangely satvav doesn't take you to the wheel. "It always takes you round the back," said our helpful boat guide. Hence arrived at 1.30pm in the vicinity but not loading up until much later. Explanations and tuturials and it's well late - around 4 o'clock. The canal map was schematic. We couldn't judge distances and not amny bridge numbers. Basically lost. Joan and Dave connected but we weren't close to Linlithgow. Lovely to see them after lockdown, but birthday celebrations on hold. Until the following day. 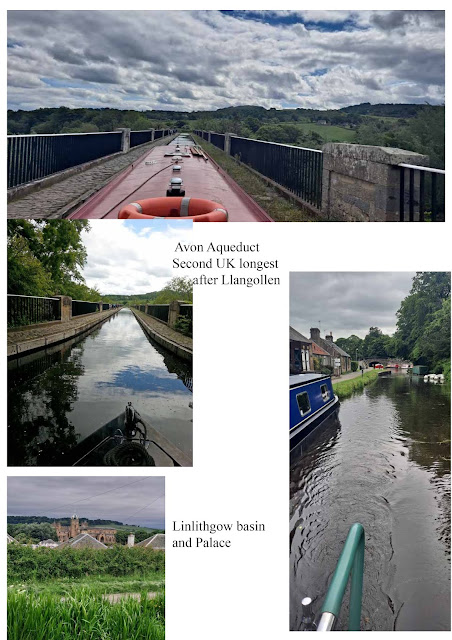 "You'll get a mooring in Linlithgow basin," said the boat guide. Wrong. Totally occupied by volunteer boats. So we turned round - not elegant, a 7-point turn rather than a simple nudge into the back, full rudder and a little throttle. Still made it and a fill of water. So a mooring facing back the way we'd come. Overlooking playing fields. The childbride enquired of a passer-by. Leisure centre we told Dave. It's an hour Dave won't get back trying to find us. We were next to a school. Great lunch back at Joan and Dave's. Tea nibbles back at the boat. We'd saved the day, mostly. 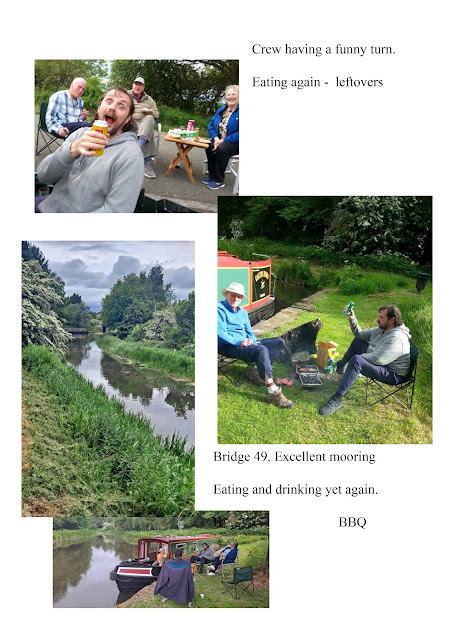 Brilliant mooring at bridge 49. Easily found. Dave and Joan had commitments and left early. BBQ and afterfire. Boat just visible at the canal top. Near to an old rail/canal junction/basin, a mineral line - Slamannan - brought coal for transfer to Edinburgh barges.

Note the sign Union Canal is carved into the stone and a touch worn. Not as much as the routine bridge numbers (keystones) where maybe one in five were still readable. One of the reasons for us not knowing where we were. 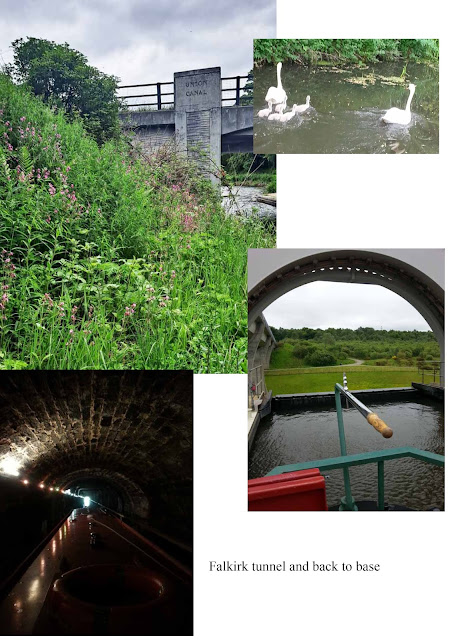 Return wheel, lock and tunnel. 30 minutes to turn round at lock16 on the Forth and Clyde. "You'll find a mooring down there and have a drink at the pub." Wrong. Full again. Good, we needed to be back at base for the morning changeover mayhem. Lock 16 on the Forth & Clyde was an 11- long flight for original connection with the Union (filled in 1960s). Restored connection via the wheel 2002.
Everyone thinks it's relaxing. Wrong. It's different, like exercise, alternative thoughts to normal. Cruising is calm - only the driver has to be alert. Intermittent sessions of activity needing the crew alert as well - mooring, turning round, taking on water. Despite urban, Scotland has its rural corridors. Not many signs of its industrial history. We spent a lot of time making mistakes and bumping into things and each other in the cramped cabin.
I for one thoroughly enjoyed it.
........................ 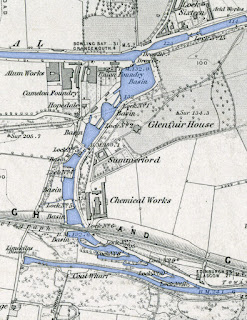 original lock flight up from Forth&Clyde to the Union
starts at lock 16, 15-20 minutes from the wheel 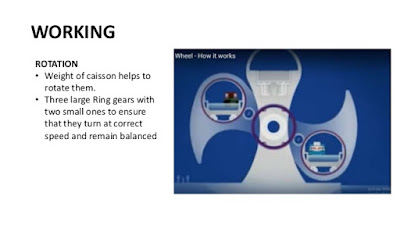 Email ThisBlogThis!Share to TwitterShare to FacebookShare to Pinterest
Labels: away day, canal, scotland