Up under the roof at Anfield. South housing to the horizon with a spire or two, but no obvious landmarks. East derricks, cranes, big ships of the port. The stadium is large and stunning and shining clean inside. Seems to be continuous expansion. On this site since 1880s, initially rented by Everton. 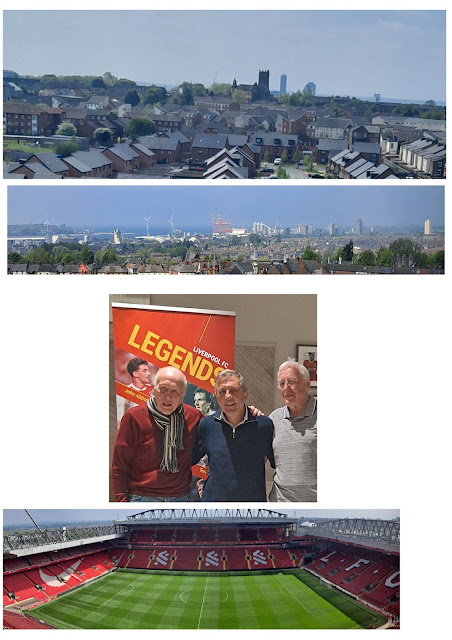 Older brother’s 80th and the Anfield tour. Beginning in the players’ lounge, Q&A with Alan Kennedy, left back and hero of the 1983-4 treble. Signed from Newcastle in 1974 for £43000 or thereabouts. “They get that per week now.” Alan seems to be the go-to media guy just now. R4 and BBCTV.
Supporting Liverpool is not a bandwagon. We lived there between 1966-72. Kop visitors twice. Hunt, St John, Lawler, Callaghan, Smith, Yeats, Shankly. We were rugby guys really. Followed from afar since - Cardiff, Saddleworth (Manchester), Bedale (N Yorks), Honley and now Holmfirth (Huddersfield). I'd a tenous connection when I was at school, supporting Huddersfield Town. Shankly was our manager then. Brought Denis law to Yorkshire. He supervised and played Sunday afternoon soccer on a rec in Lindley and I turned out.

Alan was on for an hour or so. Main takeaway message was the culture of team, manager, boot room, programme sellers, caterers and so on. They’d been a second division side until Shankly (1959 -74), a staunch socialist. All equal, no stars, humility, common purpose - winning, The Liverpool Way, The Liverpool family. Disdain for authority, world against you, closing ranks, strength from within. Needed for Hillsborough and Heysel. After Shankly, Paisley (1974-83), Fagan (1983-85), Dalglish (85-91). Moran and Evans in there somewhere. All signed up to The Liverpool Way. No idea when it all went corporate but today, it’s telephone number wages like the rest. 'The song was written for the 1945 Rodgers and Hammerstein musical Carousel. In the second act, the character of Nettie Fowler, a cousin of the main character Julie Jordan, sings 'You'll Never Walk Alone' to comfort her when her husband Billy dies.'
smooth radio

Sadly now a cliche, the song adopted by many teams and organisations. The Kop has sung it as an anthem since the 1960s, originally recorded by Gerry and the Pacemakers. The rise and rise of Liverpool FC was mirrored by the successes of Merseysound. And it's still powerful.

The boot room ran things. Inner sanctum, no players. Just room for six managerial staff under the main stand. No natural light. Talk for hours about everything. ‘Conveyer belt of wisdom concealed in a broom cupboard.’ The dugout and The Kop. 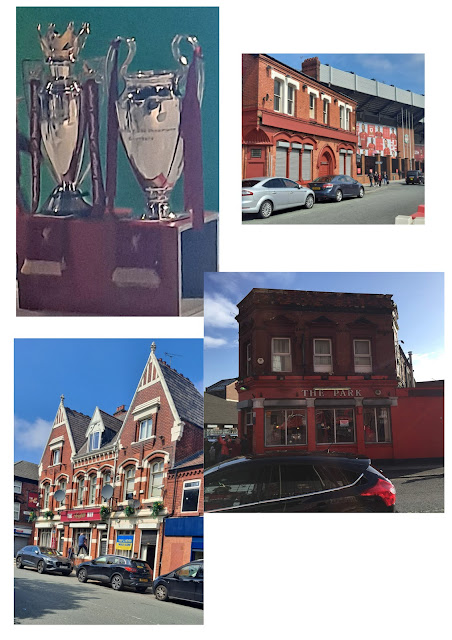 Older brother had a spat with the official photographer who was not allowing private pics of the European trophies. I sneaked in round the back. Three pubs round the stadium. The 12th Man, bottom left is a tribute to the extra player that the supporters represent - in this case more specifically The Kop. The Park, bottom right, was Pete and my choice for RL's magic weekend at Anfield. Totally mobbed. Hull FC supporters, stripped to the waist, singing, shouting, arms and shirts in the air. Landlady looking bemused. We went out the back which was a bit of a building site and had a quiet chat with 2-3 quieter Hull guys.
So we were treated to a view of a less pampered era. Alan confessed to an additional team drinking culture. Even drinking before playing. Still won. Today the players are confined to their rooms from 8.30pm the night before a game.

We missed out on a few things, but it didn’t spoil an amazing experience.