RL World Cup Final - we knew how it would end, but what a journey

Oh No: not again

A repeat of 2013 (link), started by getting stuck again on Stalybridge railway station.

11.30am: we, me and my son Chris, decided on the train from Greenfield. We’d to drop off a child and I needed the loo, so we changed to Slaithwaite. He’s mobile-timing everything and we’d missed that one. Right, back to plan A. Traffic not helpful, so Stalybridge said the mobile. Greenfield was one train an hour. Stalybridge four (includes the shuttle to Manchester Victoria, but Chris had planned to Picadilly). Time for a quick beer in the buffet real ale bar. Full of men, presumably ‘ale-trailers’. Out for the Picadilly arrival. Packed and couldn’t get on. I suggested we could have gone to Slaithwaite and caught a return to Greenfield. Chris points out we wouldn’t have a car. Ah, what was I thinking? Now on plan D. Chris-mobile decided taxi, not the shuttle. It worked. Going up to 1.00pm as we got out at Picadilly - he pays £20.

Tried a couple of taverns - ten deep at the bar just like the train. Walking toward Picadilly Gardens and what is on our right and emptyish? ASK the Italian. More than good enough. Peroni, Expresso-Martini (what? son of mine?), bread and balsamic/olive oil, calzone and bruschetta. I got legged up with the vinaigrette, but the waitress helped out. I pay over £40.

Into the Christmas market. People everywhere. Manchester on a Saturday before Christmas and a World Cup final. Official looking guide at the tram station directed us to the Altrincham tram. Platform card reader. You must repeat when you get off. Comfortable ride. Lady next to me wanted to know what all the fuss was about. She’d gone to town to have her hair done, expecting a quiet time. Explaining how the Samoans all play in Australia and who all the crowd was - they couldn’t all be from down there - was a stretch, but I managed and she smiled and listened attentively - still got it.

Walk past the cricket arena. Ryan Hall on the other side of the road. A group of very big people dressed in blue enjoyed my ‘Go Samoa’ chant. Tickets on the mobile, through the turnstile, a climb resembling Scafell and we arrived at the wrong place. A little man said we were part of a long line of displaced persons and “follow me”. Still the Ferguson stand, but down on solid ground and a distance from where we started. 3.45pm. Kick Off 4.00pm. 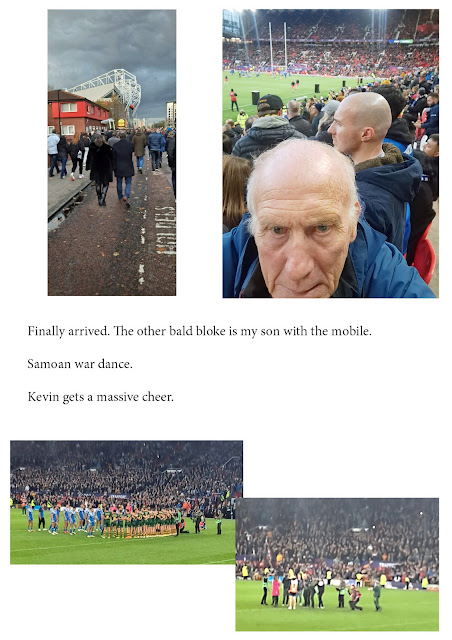 64000 and not far off full. Massive space. A cliche would be to describe it as a cathedral of soccer. Too noisy. Something more climatic, like a smouldering volcano. Messaged James (my 2013 partner) to let him know where we were. His strange reply was something about beer? 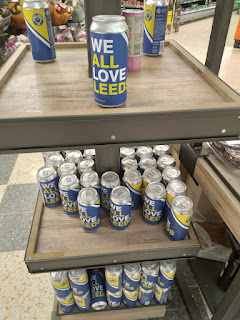 What on earth? Any better than plastic Carling? James thinks not - Whiches wee, wot?
My seat was okay as long as I kept my knees in the aisle. Some slight bruising and didn’t see a lot. Especially when people keep standing up - a hazard at all rugby games. Highlights included the Samoan war dance, a couple of set plays from the Australians and Kevin Sinfield finishing his ultra-marathons. Australia were never in trouble - they would have vapourised us. You have to have a beer. Carling in 330 plastic bottles at £5 each. Nasty.

Full time and Chris arranged to meet up with a university pal. No rest, keep moving. Manchester United social club with wall-to-wall TVs screening the second half All Blacks v. England at Twickenham. Wish we’d play like that every week. The alumni got on well, recalling old events and swapping World Cup football cards. John Wilkin in the club and mobbed. An articulate pundit. And we were off again, retracing our steps to the tram. Danny Brough and Luke Robinson in the queue. It’s all a bit tight, people everywhere, but merciful short distances back to town and Stalybridge. Nobody said a wrong word. Home over Greenfield. 9.00pm. 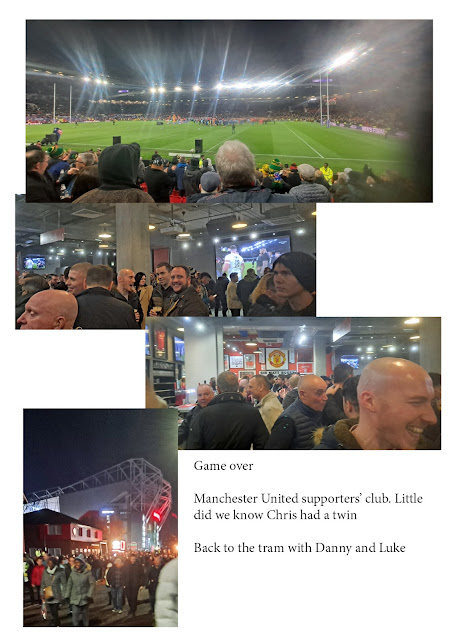 We had a great day. Chris kept hold of me. His changing plans kept working and we got everywhere we needed to be.
Looking back to 2013, I realise that is when I began the blog. 9 years. 135395 page views (how many were mine?). Quite a few comments and a lot of adverts. Linked through facebook for distribution. Tried to understand SEO and failed. You could spend your life on it. It's never got beyond a personal record, a diary.