A funeral and a fire engine

Bob and Avril Carrick gave us a lift in their large VW to the funeral of a fellow New Mill Male Voice chorister, David Marshall. The service was in Mirfield and we set off from Compo’s cafe, Greenfield Road, Holmfirth at 10.40am. We went up Greenfield Road like an F1 racer. It was quiet through Meltham, only for the F1 to reappear toward Netherton. Then Lockwood, Town, St John’s Road, past Hopkinson’s where Bob worked, Birkby, Norman Park, Fartown, Asda, Bradley, finally emerging on Leeds Road at Cooper Bridge. Several intermittent bursts of the F1 whenever there was two cars space in front of us and we arrived at 11.25am. Jackie Stewart in a previous life.
The service, the son’s eulogy and the singing were great.
Many thanks to the family for the wake at Dewsbury GC. Thanks also to John and Delia Rotchell who donated a boxful of toys for my grandson, who strangely enough, is called Jenson. Maddy, David Marshall’s granddaughter, wandered over, ‘What’s in the box?’, ‘Toys,’ I replied, ‘a workbench with hammer, a tractor, two Thomas the Tanks and a Fire Engine. You’ll be too old for them.’ ‘Yes I’m eight.’
The return journey was more direct because I was navigating. So there were fewer instances of me being pinned to the back of my seat. ‘Do you hear the siren? Where is it?’ asked Bob. We tried to listen carefully, prevented by Avril who does sometimes find it hard to press her mute button. No, we can’t hear anything. ‘There it goes again. Keep looking.’ Now Bob and Avril are canny Scots persons who go into a dizzy fit if the car makes a noise outside their normal limits of a roar and a scream. ‘It’s the car,’ he said. ‘Yes,’ I said, ‘every time you take a left.’ ‘No, there is goes again, on the straight.’ It’s every time he thinks he’s Jackie Stewart, I thought.
‘What’s in the box, David?’ ‘A workbench with hammer, a tractor, two Thomas the Tanks and er, er . . . a Fire Engine.' 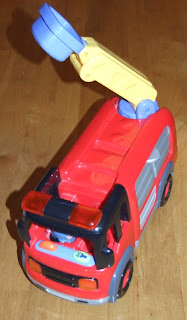