That time of the year again.
Rupert arrived at the hotel on time and was late for rehearsal. He’d given Alan Hicks a lift, regaling him for 2 hours on the rights and wrongs of how to pronounce breakfast and whether it was grammatically appropriate to use thankfully or fortunately.
The baritones were asked by the tenors to move along as they had insufficient room to sit down. We complied and added a chair to our line, next to me as it happens. It remained vacant for the duration. A phantom tenor. Is there one or two about?
The warm-ups included a trick to encourage us to sing a triplet correctly. It didn’t work for a while. We also had a left-right rhyme to coordinate with walking. I’m not sure we cracked that either, but, unlike the first ruse, it wasn’t integral to learning new music.
For some reason the size of baths in the bedrooms came up for discussion. Apparently one singer was fortunate to have an enormous one, complete with optional water-wings and life-belt as standard.
No theory this year, though we did get legged up in chord inversions during a bass-baritone session. Rupert shook his head and looked into the distance.
A new phrase gained currency as the weekend progressed. Ibbotson’s Syndrome is described as follows: Non-Langerhans cell histiocytosis associated with lymphocyte-predominant Hodgkin's disease (Clinical and Experimental Dermatology v24, i5, 365-367, Sept 1999). When the title doesn’t make any sense, are you like me and lose the will? It’s why I don’t read the Guardian. I can’t do the crossword either. I think our definition of the full-blown Ibbotson’s Syndrome would go like this: predominantly male, age range 55 to 65 years, loose-limbed mania, a tendency to overdressing, volunteering to perform far too easily, delusions of singing grandeur, staying on too long, memory loss and an absolute lack of remorse including a serious and complete breakdown of any meaningful form of communication with the accompanist. The weekend clinic was well populated with a full-blown and several milder versions of the problem.

The new music is as follows:
He Ain’t Heavy. First recorded by Kelly Gordon and then The Hollies in 1969. For Rupert’s benefit, the title is an example of paraprosdokian in which the second half of the title causes the hearer to reinterpret the first half (wikipedia says so). See also The Justice Collective.
George Formby medley.
No Arms Could Ever Hold You. A hit for Chris Norman as a solo artist. He also had success as part of the band Smokie, an English Glam Rock band from Bradford.
Abide with Me. Alan’s arrangement for his dad, originally written in 1847 by Henry Francis Lyte, sung to William Henry Monk’s Eventide. Frequently part of religious and military services, films and TV programmes. Integral to the Wembley RL cup final preliminaries since 1929.

The formal entertainment included:
David Thorpe - a singalong version of New York New York. Richard Green said he’d no time for Frank Sinatra’s singing. I was a touch astonished as I quite like him myself. Something about slurring his words - it doesn’t make you a bad person.
Clive Hetherington - a gently mocking version of the Kathleen Ferrier Northumberland folk song Blow the Wind Southerly. Born in Blackburn, as you might have guessed, she was said to transcend all boundaries and snobberies of class and taste. Clive’s blow the wind suddenly, his take on pelvic gaseous effluent, was witty and well sung. The only boundary it transcended however was  the elastic in Clive’s underpants and as for snobbery, class and taste? Aren’t they everything that Clive stands for? Maybe not.
Bill “the voice” Hopwood - following rave reviews for his solo at David Marshall’s funeral, a potboiler from the club scene. Love is All by Joe Longthorne MBE.
Alan Hicks - lyrics by Rudyard Kipling, saluting the tommies of WW1 who had to walk miles in the African sun behind their officers on camels. Boots, according to Alan is a boring marching song, and remained boring despite his best efforts to give it an animated makeover. Apparently US Navy Seal training uses the poem to simulate torture, for 18 hours at a time. Says it all really.
John Senior - a recitation for a change, Arnold the Armadillo has dodgy eyesight and gets the hots for a concertina (‘bright silver buttons’ and ‘black leather’). ‘Sex with a concertina is rarely accomplished discreetly’. ‘Picture love as a kind of concerto, poor Arnold his first was unfinished. What let everyone who was there know, was a very loud C sharp diminished’. Should have gone to specsavers.
Geoff Gill - another recitation, again flatulence the subject.
Our eponymous hero or maybe antihero - his best was Slow Train written in 1963 by Flanders and Swann. The symptoms then took hold during Mad Dogs and Englishmen (Noel Coward) and HMS Pinafore (Gilbert and Sullivan).
Steve Davis - immaculate as ever with Steal Away.
Ged Faricy - an echo of our new music with Leaning on a Lamp Post complete with ukulele accompaniment.
Graham Dawson and Eddie Sykes - Eddie recently met a Cornish lady who sorely missed our concert outside the St Ives’ lifeboat station. So did we. I can’t remember the link between St Buryen’s MVC and Perhaps Love but it’s turned into a passion. Placido Domingo, John Denver on CD every breakfast. Ultimately Alan Simmonds’ arrangement and today’s performance.
Rod and Dave - Dave’s birthday today which he shares with Dolly Parton (1946), Ged and Phil Everly (1939). Bye Bye Love, a tribute to Phil who died 3.1.14, sung with their usual aplomb.

Rupe and Alan returned home Saturday evening, inversion chords ringing in their ears. That left us with the Saturday night gala at the Highlander, a pub which I’ve frequented for 20 years, first with my father-in-law and subsequently with anyone who will go. Sadly, the young lad behind the bar automatically pours me a pint of 1664. The following comments are purely gut reaction. My pick was Andrew Morrison. He sang from his shoelaces to the hair on the back of his head. Everything went into his performances of Wild Mountain Thyme, about the hills around Balquhidder, and The Fields of Athenry, an Irish folk ballad set during the Irish Famine (1845-1850) and adopted as an anthem by Irish rugby, soccer and GAA teams (Celtic and Liverpool as well). It is also a rebel song, ‘protesting the intervention of the English crown in Irish affairs and the harsh treatment of Irish nationalists by the British’ (http://everything2.com/title/The+Fields+of+Athenry). Andrew sang it because he loves it, taking the opportunity to throw his head back and just let it all come out. He loved it so much he made several excursions into the back of the bar to share it with those who had just popped in for a quiet drink. My second pick was Graham Dawson. Smooth Classics, Dinner Jazz, Mel Torme. 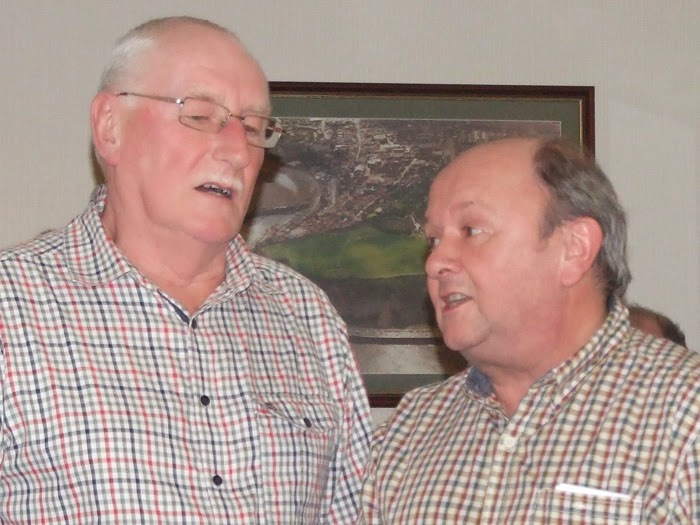 John Rotchell and myself ate in the Highlander on Saturday evening. Two couples were dining just behind us. John eavesdropped and discovered they lived in a nearby village and had come just for the New Mill entertainment, having experienced it last year. Fans! I wonder how many we have? We finished the following day with two pieces for the hotel staff and the over 60s Sunday lunchtimers. If they could have they would have given us a standing ovation. 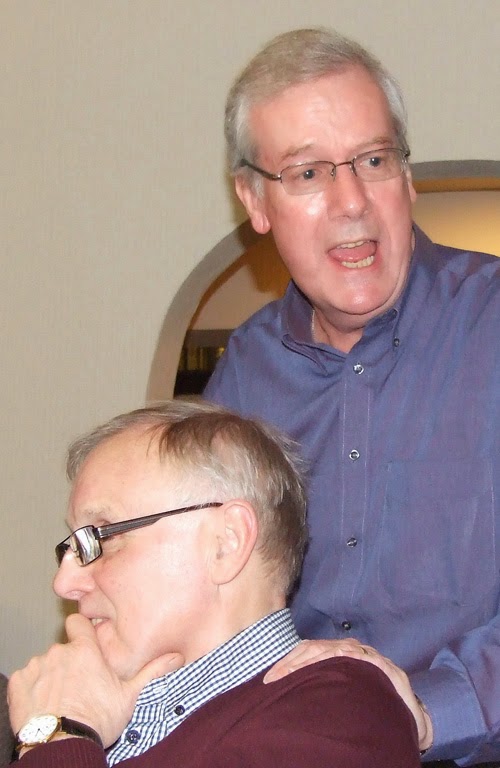 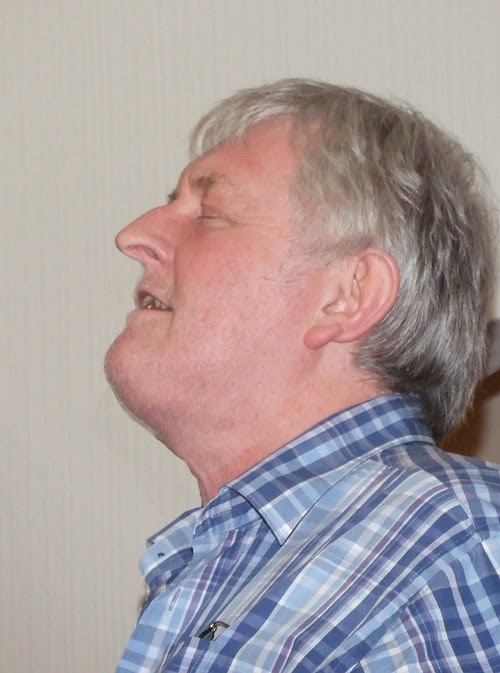 Email ThisBlogThis!Share to TwitterShare to FacebookShare to Pinterest
Labels: away days, Scarborough, singing