It is understood that the Festival trip is busy with travelling and singing. What spare time we had was spent on the coast at Newquay and Sennen Cove, along with some sight-seeing in Truro. The weather was mixed. but we weren't drowned or frozen. It's fair to say Newquay may not be everyone's choice of destination. The life boat visit to Sennen Cove was appreciated.

Month in month out, the feedback the choir receives is genuine and well-intentioned. It comes from our supporters, mostly friends and relatives who like our style if not always our repertoire. A festival raises the bar: by comparison with other choirs and, if competing, by constructive criticism from highly qualified experts. New Mill have just returned from the Cornwall Festival for male voice choirs and what a musical white knuckle ride.
Three concerts in religious institutions, a short set on a bandstand at Land's End and a contest at 'The Hall For Cornwall'. Whilst we shared the three church concerts with traditional male voice choirs, the performances also contained ensembles from the European mainland comprising young, well-trained boys and youths who sang beautifully. In Latin and other languages we couldn't understand, many of their songs, though brilliant, sadly merged into each other. There were exceptions: 'Wimoweh' ('The Lion Sleeps Tonight'), 'The Alleluia Chorus' from Handel's 'Messiah' (the boy sopranos vaulted superbly over those top notes) and John Lennon's 'Imagine'. 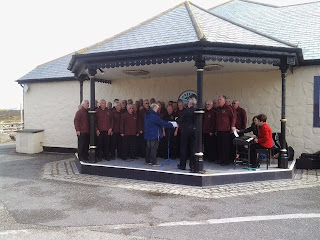 Friday night, we were in our comfort zone down at St Pol de Leon, with our friends from St Buryans MVC. Great set and we were happy. Saturday, we struggled in the contest and later, had technical problems in the austere setting of a non-conformist chapel. The choir was disappointed and it showed. We only had ourselves to blame. Sunday - how would we follow Colne Valley? The setting was a windy concert bandstand in Land's End theme park. Clad in their three-piece suits, Colne Valley sang within themselves, competent and good to listen to. We assembled and went for it. 'Let All Men Sing' fortissimo, two of our bankers 'Let it be Me' and 'He Ain't Heavy' and finally, 'Just George' with actions blew the audience away. We can be rough around the edges at times, yet we perform, entertain and enjoy. And that's what we'd just done. It rescued us. 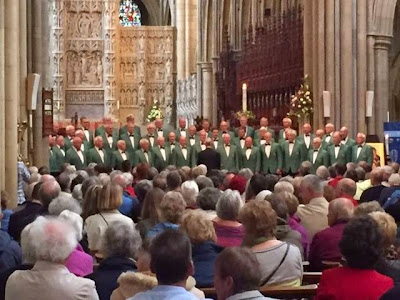 Monday, the stunning Truro Cathedral and its complex natural reverberations. 'Ave Verum', 'Nella', 'In Flanders Fields' and 'Abide with Me' were simply brilliant. We were well and truly back on the horse; back to our old selves. Patricia Whiteley, one of our supporters and a singer herself wrote 'Great concert in really marvellous surroundings. The choir were awesome and spine chillingly wonderful'. Can't better that. 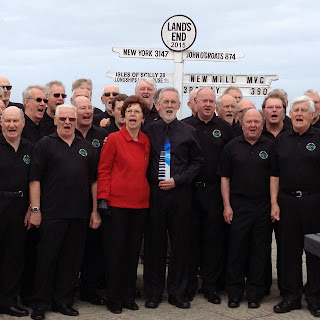 We couldn't have done it without Anne, standing in for Emma, and Alan. He chose appropriate concert pieces, managed the echoes and encouraged us with wide eyes and fist pumps. Had he been polynesian with tattoos, he'd have been doing a haka.
During our concert performances, compared to other male voice choirs, New Mill were up there with the best. Whilst we await a review of the adjudicators' comments, which apparently contain basic constructive advice, the discipline of contest preparation and execution can only benefit the choir. Just how far have we come from the small 1991 village choir?
There was an issue with the boiled sweets on the way home. Supplies were down so sadly, one between two.