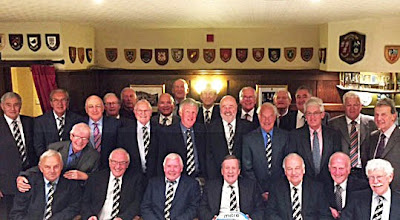 Former rugby players from Huddersfield New College met last night at the latest of their biennial reunion dinners. The venue was Lockwood Park, home of Huddersfield RUFC. The attendees were mostly from the early days of New College which was founded in 1958 when the old College merged with Hillhouse Technical School. Ron Capper was the coach and inspiration behind that initial team, followed in the 1960s by 'Tubby' Hawes. I was in the first and second forms when most of the guys in the photo were playing, though there was a handful with whom I overlapped. At 68 I was the youngest there. Sadly no one from teams after 1965 were represented and as the last admission of 11-year-olds was in 1972, I think school sports and rugby must have subsequently gone into decline.
So a short and fondly remembered era. Many went on to play for clubs and good ones at that. The middle 1960s team helped form a colts side at Huddersfield RUFC (with St Gregory's and Holme Valley GS).


John Berry, a county player, gave the address, extolling the virtues of Ron Capper. He also hinted at some breaches of 'Health and Safety' in some of our fixtures. What about 'boys vs masters', an annual mismatch? The masters were no good but had enough enforcers to stop the boys; notably George Redmond, a french teacher who eventually became well known for writing books about local history and place names. John reminded me of an unsavoury incident from just such a game. A geography teacher, Mr. Hargreaves, strayed offside at a lineout, and I encouraged him to return to his allotted space. I can't remember whether I shoulder-charged or smacked him, but he threatened to report me to the headmaster. No sense of humour. Fairness to him, he came and apologised at the after match meal. 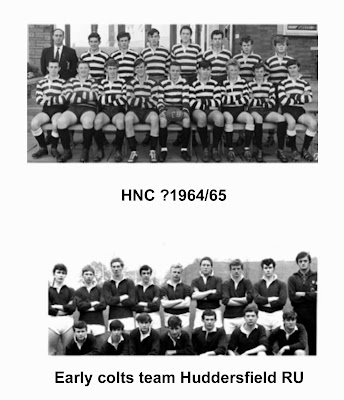 John concluded that Ron had helped us all to love rugby; its many guises, cultures and friendships. I played until I was 44 (HNC, Dalton St Pauls and Deighton ARLFC, Huddersfield, Waterloo nr Southport, Llandaff in Cardiff, Saddleworth Rangers ARLFC, Northallerton vets and Old Brodleians vets - its a kind of CV which can be written in many different ways, like hairdressers - see http://dawalker2.blogspot.com/2014/01/how-many-haircuts-are-there-in-life.html).

ps. this blog was posted on Facebook's 'Huddersfield then and now' group, yielding 2 comments about Ron moving to Royds Hall in the early 1960s.
Posted by David Walker