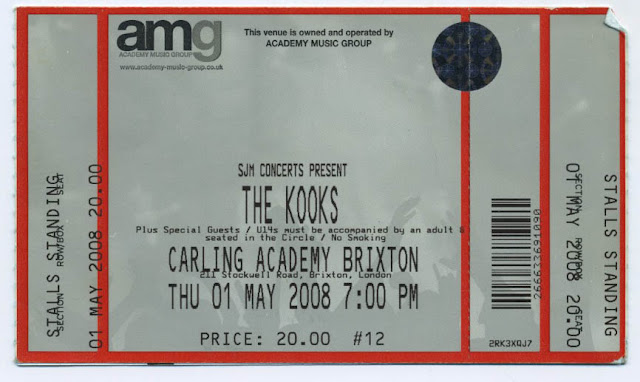 Uncanny isn't it? Virtually the 9th anniversary of the Kooks' Brixton gig. They are touring as we speak, most of the UK dates sold out.

It started by joining the local library. I'd just gone to bed and opened up a book by Ian Banks' (Transition) when this ticket fell onto the bedclothes.

Had the ticket been hiding in the book since 2008, waiting 9 years for another reader?
Had the book once graced Brixton library, when a Banks' and Kooks' fan attended a local concert and used the stub for a bookmark? Actually it's not a stub, but a fully intact ticket that was too big for the scanner. So whoever never attended.

A standing ticket in the stalls for £20. £30.25 this year for a standing at Ally Pally, London. Not a massive increase by any stretch of the obscene ticketing scene.

Wikipedia states 'The Brixton Academy, officially called O2 Academy, Brixton, is one of London's leading music venues, nightclubs and theatres. It has hosted a range of leading rock acts since becoming a music venue in 1983. The maximum capacity is 4,921 (3,760 standing downstairs; 1,083 seated and 78 standing in the circle), alternatively the all-seated capacity is 2,391.'

So standing more than doubles sales. Presumably the lager people sponsored the venue in 2008.

Anyone else not heard of the Kooks? Formed in 2004 at Brighton. Wiki says they are 'Self-described "whores", The Kooks have drawn on a number of varied sources to create their sound. Listing The Rolling Stones, The Beatles, Bob Dylan and Chris de Burgh among their influences ...'

This from Utube  I confess I won't be paying 30 quid to stand.