The Arch pub for our evening meal in Ullapool. Irish girl in her twenties served. "How long have you been here?" "Thirteen years." "Which part of Ireland are you from?" "Deep south west - the arse end." It wasn't the information that threw us, more the tone. But, fair enough.

Our Ullapool landlady was called Shirley. We weren't expecting that either.

A dolphin pod cut across the Stornaway ferry bow.

Haircut in Stornaway. The first in a series of exotic haircut locations.

Interesting the possible ways that soap was discovered - ladies washing in Rome next to a cooking fire. Fat from the animals mixed with ash, which is apparently alkaline, produced stuff which made the washing easier. This from the Hebridean soap company. The owner was a single lady with a dog. Originally from the Sheffield/Nottingham area, via Frankfurt and other places. A financial refugee. The village ladies wrap the soap bars. Outlets mostly on the island.

A Saga bus rolled up when we were at Callanais. Uncharitably I compared their ages with the stones - I should talk. A radio suddenly started blaring out pop tunes. "Who is the idiot with the radio?" I said, pointedly looking and glaring about. Big D looked at me disdainfully, "Dave, it's coming from your pocket." Shit, my hand-me-down phone from son Chris was switched on and tuned to one of his selections. Didn't cover myself with glory at Callanais.

Chris had challenged me to buy a Tweed jacket, so I had a look in Stornaway. Saw just the one in my colour - a dark browny-green - but the lady serving on confused me about buying a cloth length and having it made up. Fitted nicely too.

The tourist guide suggested a loom 'demo' shop on the high street. An old scrote emerged from the dark back room. "Where's the loom?" I asked. "I'm not peddling that any more, I'm 72" Oh, alrighty then. "You're still in the brochure." The reply was succinct, possibly in gaelic, and the tone was unambiguous. It takes one to know one - a grump that is. He mellowed a millimetre when we said we were from the W Riding.

The checkout at Tesco's was manned by a guy who didn't understand what I was saying. I had to repeat "How are you doing?" twice, which I did increasingly slowly and loudly. Perhaps he didn't normally get asked questions of a personal nature or perhaps he was a gaelic-speaker. He certainly wasn't deaf. I can be a wassock at times.

During our great visit with Norman at Carloway and his magnificent Hattersley Hand Loom, the so-and-so radio went off again. The crowd, six in total, sighed and looked at the ceiling. I disappeared. I'll bless Chris.

The beach at the tip of Great Bernera would grace the Caribbean. The Time and Tide Bell was here. It wasn't working.

We burnt peat on the cottage fire.

Away from Stornaway or tourist spots, there is no one about. The island seems more remote than the Dales, Lakes or Scottish west coast. Places we know quite well.

I bought a jacket and cap in Tarbert, Harris. The lady serving on said she didn't have my size if it wasn't on display. Big D sent her over to supervise me personally. After some time I got a perfect fit in blue. They are made in Leeds and even she got muddled over the chest sizes in combination with long, short or regular fit.

Great coffee shop - Hebscape - run by a couple of gay men. I was a little concerned about the shower in the toilet. Is it engaged and in use? I wouldn't share wi a yucca anyway, would you? However I couldn't help noticing the golden chain. I wonder if the yucca is being held captive? For its own safety? Or ....  ? 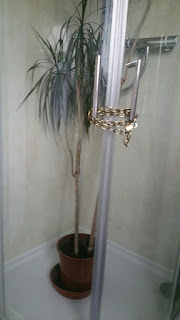 Harris has one breath-taking view after another.

The Red River distillery used to be a fish farm. The whisky on sale was great and expensive. Matured in bourbon casks. The barley, which the owner grows himself over in Stornaway, was peat roasted for 2 days only. The girl doing the tours and the tasting didn't drink. Their other offering had only been in cask for eighteen months and was 'medicinal'.


Norman and his Hattersley hand loom
Posted by David Walker