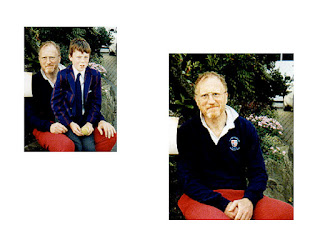 Coffee and the neurochemistry of ageing. When I was working I found some of the medical scientific articles incomprehensible - I even struggled with the titles. Well it doesn't improve with age - the complexity of brain structure and neurochemistry has substantially increased whilst my abilities to analyse it all has gone in the opposite direction.
Thankfully there are articles composed of words of one syllable such as this previous piece on the value of coffee in the older person. It suggests that caffeine helps clear nucleic acid breakdown products which can produce inflammation. I'm not altogether convinced, but hey why not? Everything helps. My recent reading suggests that caffeine resembles adenosine, the chemical that makes us feel tired, and blocks it. Something similar with dopamine, a happy chemical, so the levels of this stimulant increase. And norepinephrine, an energy chemical. So yes, more alert, engaged and fit.
Neurochemicals exist for brief periods in minute quantities in the spaces between the ends of nerve cells when the cells are working. The cells group into a recognisable neuroanatomy, bits of which light up in a scanner when we are happy, sad or about to kill someone. The lit up bits sadly are not necessarily as recognisable - they cross party lines.
I'm drinking Taylor's Brazilia just now. A middle roast with a good breakfast hit.


The two latest grandchildren, weeks and months - Navy and Emily 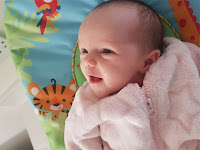 Have you ever thought about writing an autobiography. Not a shocking blockbuster or hugely insightful lesson for all and sundry. Just something that makes a few notes about your life to pass on to grandchildren. Well, I've been writing cobblers since 1994, some of which is stored either in a notebook or the computer. My daughter, Louise, last Christmas, bought a designer book with a more formal family history in mind.
This, on the face of it, might seem easy-ish. It can be pleasant, recalling happy or funny events. Quite the reverse for those, many in my case, events that didn't go so well. The family history itself can get you pretty grounded. I've traced mine back to the early 1800s and happy with that. The Walkers then lived in a small holding in Lindley with some crops, chickens, a mule and a loom in the front room. Normal for pre-industrial times. The Addy's, the other half, came from Shelley via Kirkburton. My earliest discovery worked as a railway porter and his son was a coalman who lived in Hillhouse - a bit more industrial, around 1850-1900.
All well and good. Time-consuming, fulfilling and embarrassing. Then the childbride gets involved, "What you writing all that for? All the kids need are a few sentences." It is actually true, so there are now two versions - phew.
Here are some other things to think about. Firstly time. Serious writers allocate a daily writing routine which is deliberately selfish and excludes everything and everyone else. It needs your nearest and dearest, the childbride in my case, to agree. Broadly speaking she does let me get on with it, but things do creep in - like shopping and housework and social time. But as she says “That’s life”. So the project is taking a long time, especially as I like to keep up with my personal blog, but even that is an uphill struggle.
Secondly the headlines suggested in the book Louise gave me. They seem to be in the wrong order. For example, the family trees come after my first memories. To make a coherent story, I have arranged the articles in chronological order.
Thirdly duplication. Writing since 1990s, I have a lot of archive material. It can get a bit muddled up. At best it is duplication, which can be no bad thing in a large piece of work. Bill Bryson tells us that no less a writer than Shakespeare made a fine mess of keeping his plays in some sort of order.

Fourthly with pieces from different eras, there are different styles and voices. Stuff about family trees and history take on a matter of fact feel. Describing emotional events such as a funeral or illness. Or the pains of growing - either leaving home yourself or watching your own children leave home or struggling with getting old. All these have a different tone.
Fifthly there could be problems with my memory - so a proportion of the writing could be inaccurate, though pieces written nearer 1990 are likely to be more valid than the recent ones.

Understandably many of us think we can't write. Much like the numbers who think they can't sing. Okay, there are equal amounts of pain and pleasure, but it is to be human to tell stories and make music.

It looks a bit like a relief map of the Himalayas, but it is actually my family tree.
Addys on the left, Walkers on the right. It's too big for the brief case so it has
to be folded.

We are busy. Remember to age disgracefully. Sitting and watching TV with pipe and slippers is no longer an option. However we can get in a bit of a tuck trying to fit everything in.
Here are some tips:
(1) What are you trying to achieve at this life stage?
Erikson suggests acceptance that life has been useful and complete. Sure, but most older people think our lives are a bit more than that. Goals and achieving them are still about. What are they? They have to be in some way disgraceful.
(2) Make a list. The eternal step. We have lists for everything if we can remember where we put them.
(3) Arrange the list items in order of importance according to the goals.
(4) Write the new list down.
(5) Make a commitment - when are you going to do what? Write that down as well on a weekly planner. There are plenty of planning aids on the net.
(6) You may have to be a bit rigid about the things that are most important, but flexibility is also a must. How do you cope when the grandchildren arrive unexpectedly in the middle of your pet project?

Don't do it all at once, sleep on it.
It has everything to do with reinventing ourselves - remember David Bowie's take on ageing.


If you are pining for youth I think it produces a stereotypical old man because you only live in memory, you live in a place that doesn’t exist… I think ageing is an extraordinary process whereby you become the person you always should have been.

So my goals in no particular order - exercise (I don't do this for health reasons. It's always been there), writing the blog, trying to design a better blog and understand increasing traffic, helping out with housework and shopping, enjoying the companionship of the childbride and our family, watching documentaries and reading books which inform the blog, go somewhere for a sleepover once a month (eg Ramsbottom), sing, publishing for friends, drink beer, talk rubbish with friends, complete the two books I've started, walking, paying bills.
These contribute to an overarching need to make sense of my rather small world, and my place in it. Remember Seamus Heaney "I write to set the darkness echoing." It's actually rhyme not write.

The list is too long and I don't manage all of it. You will have to guess the priority order.

Serious uninspired senior moment. The childbride was working at the bus station - tombola for Forget-Me-Not children's hospice. "Pick us up at quarter to four." "Will do," says I.
I waited outside the train station for two hours before returning home. She caught the bus. We met up eventually around 6 o'clock. No one died.