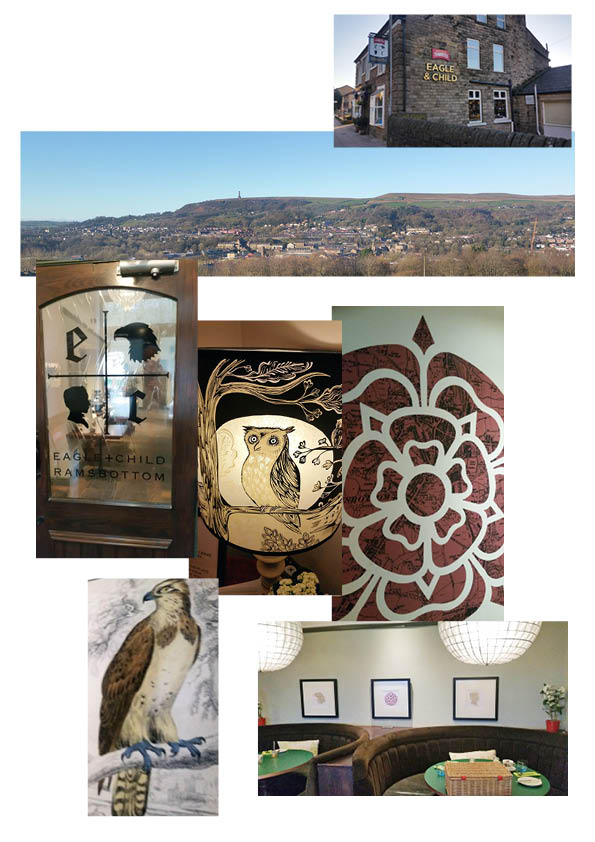 You don't expect Ramsbottom to be anything really, apart from being Albert's surname ('There's a famous seaside place called Blackpool that's noted for fresh air and fun. And Mr. And Mrs. Ramsbottom went there with young Albert, their son'). But the Eagle and Child is a haven, and it is in Ramsbottom. The name comes from the old european legend of an unharmed male child discovered in an eagle's nest and subsequently raised by the rescuer. During the industrial era, the district, sited on the river Irwell which flows to Salford and Manchester, was a cotton town. Now it is residential, presumably a dormitory for Manchester workers. A bloke spoke to me as I loitered on a downtown pavement. He would be in his forties, born there, returning for a look around. He said he could no longer afford the local house prices. The roads are very busy, feeding Bolton and other Lancashire towns. The bloke said that the mayor was investigating the possibility of opening up the E Lancs Railway as a metro. The shops are a mixture of antique, charity and upmarket ladies' fashion. Plenty of pubs, bars and places to eat, including the Eagle and Child.
We arrived at 1.30pm, met by Calam, a very civil young bearded man. "We've no one called David booked in for lunch." "No. We're booked in for a room." "Oh right. Bit confusing, these Davids." The penny didn't drop. "I'll go and see when your room will be ready."
Couple of beers and a quick snack later, the front door opened, and in walked Big Dave and Joan, our friends from Edinburgh. Hence Calam's confusion. It also clicked with us why they had said, several times, that they were unable to meet us in Alnwick a month later. Brilliant to see them, joining us for our anniversary. I must have mentioned the 2 nights for 1 deal in the Times over the phone.
Everything about the place had style. Five beds. Ours overlooked the Irwell Valley which in turn is overlooked by the Robert Peel monument on the opposite hill. A Bury man, he founded the police and became an MP and PM.
The pub was always a coaching inn, and also an overnight stop for prisoners in transit from Strangeways to Carlisle jail. Evidence of this remains in the cellars. It is very popular with the eating and drinking public, weekends for leisure couples, weekdays for more distant business overnighters. 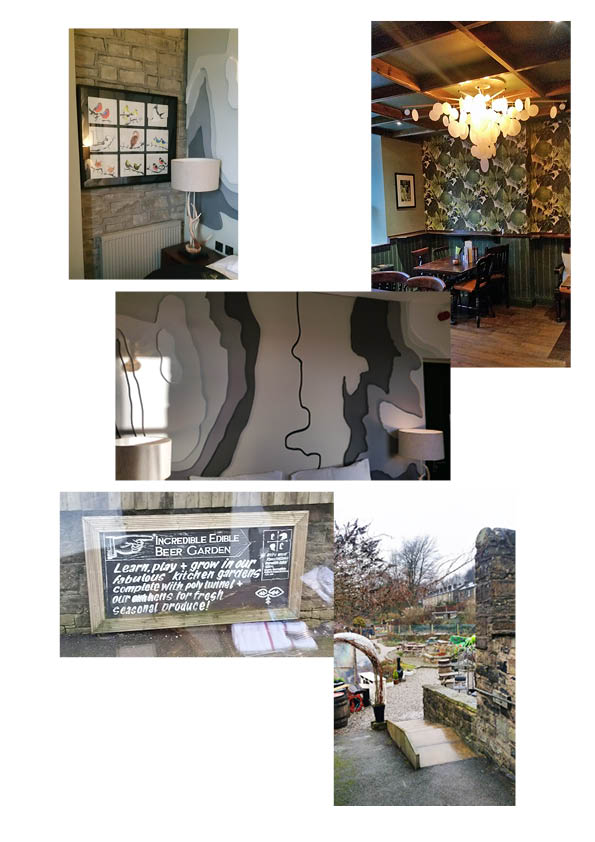 The pub is run as a social enterprise and is connected with several voluntary projects. The staff are all young and most are on some sort of development programme. Calam is learning about wine. One of the barmen is on the autistic spectrum. Others have been rehabilitating offenders. The pub keeps chickens in the garden. Emily served breakfast and let them out. She wasn't phased by the varying number of birds. The kids are obviously happy working there. It's a supportive community which they find hard to leave. Presumably not as a result of being chained up. 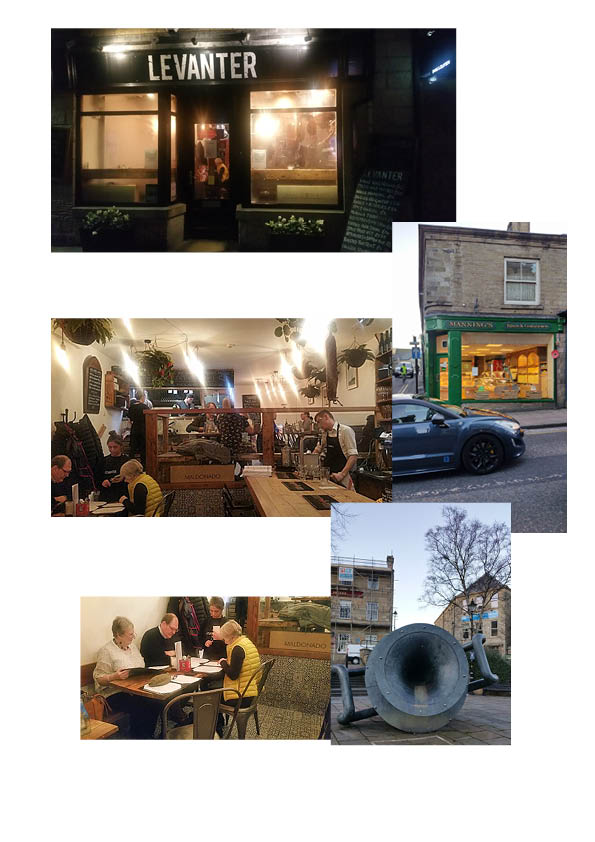 Levanter is a tapas bar, booked for us by Calam. Not expensive, compared to the prices we paid over the recent Christmas period. No beer. I'm not sure what the huge trumpet is about. When you look at it from the side, it is actually a large jug. The Mannings get everywhere. 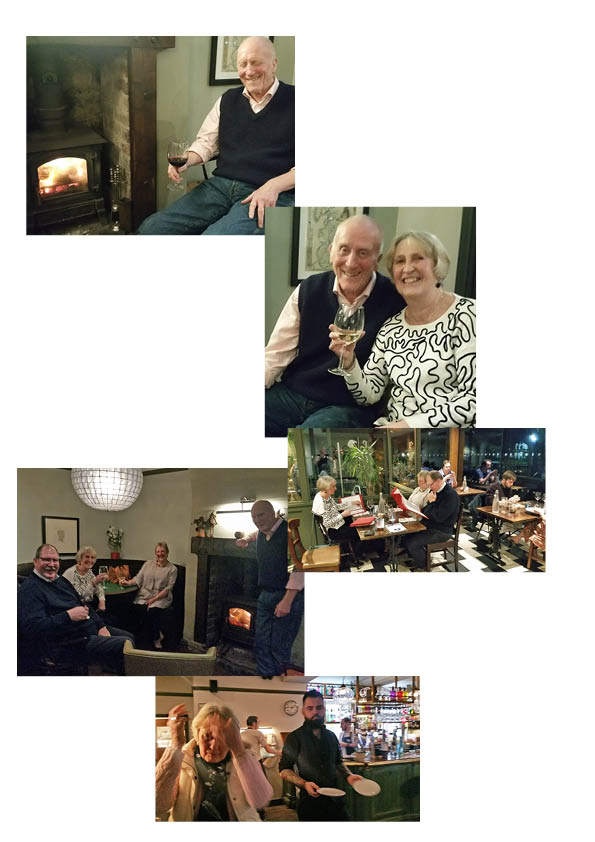 Anniversary celebrations in the pub restaurant and by the fireside. I don't know what Sheila is doing whilst Calam looks on, with a Mrs Overall pose. 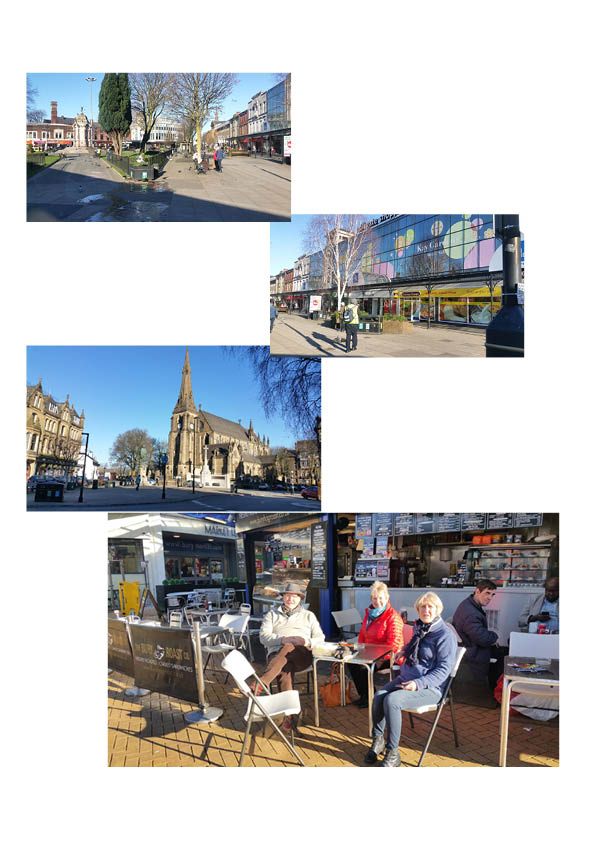 The centre of Bury is typical tired northern town. The market is fantastic, even though it was only half open. Here we are, enjoying an amazing pork buttie with stuffing. Found a black pudding stall and bought a piece of white as well.
It used to be "On the whole I would rather be in the Mute Swan" after our excellent weekend in Hampton Court for the RU World Cup semifinals. Now it's the Eagle and Child. Just an hour away and as welcoming as welcoming can be. Great for a retired couple who don't travel far. An inspired choice. And how good was Joan and Big Dave's visit.