Shallilo learns about testosterone and grumpiness 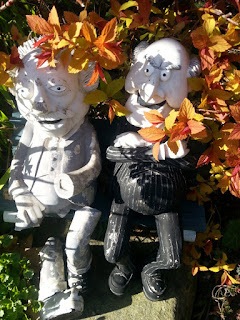 Levels of male hormones (testosterone and growth hormone) decline from the mid-thirties. Matt Roberts in the Times Sat April 13th covers the usual suspects to counteract these changes. So 'working out in the right way' can help you look and feel a good bit younger than you actually are (wrinkles and depression).
Readers of this blog will find this as no surprise, but there is some informative detail on some of the strength moves that make a difference. And there is a testosterone-rich diet.
This hormone decline might also play a role in increased grumpiness, apparently a feature of the older male. Robert Sapolsky in Behave writes about aggression and testosterone, especially when status is threatened. Testosterone does not make people aggressive, it makes 'us more sensitive to social triggers of emotionally laden behaviours and exaggerates our preexisting tendencies in those domains'.
In other words if we've been and keep being a stroppy sod, the associated behaviours are facilitated by male hormones, ebbing and flowing in the background. The behaviours themselves began on the savannah in S. Africa, adapted to survive industrialisation, honed on our dad's knee and triggered by activities like competitive sport and polishing the shoulder chip.
The Times article does not say that increasing hormone levels makes you less grumpy.