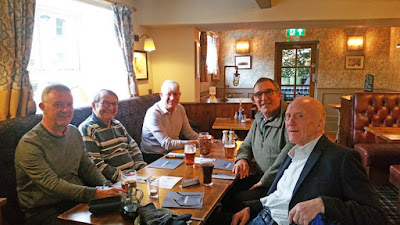 These five blokes are referred to affectionately as the Thursday Team. Hence meeting on a Wednesday lunch time. We all retired from the NHS at the same time (late 1990s) and met for a few years at the Clothiers Arms, Netherthong on a Thursday evening. Two finance, two managers and one clinician. One of those fixed points in a week. At a time when a week could sometimes stretch out a bit. We still come together maybe four or five times a year.
There are common interests: sports, especially soccer and golf; grandchildren; illness, controlled or in remission; medication inevitably; all the stupid stuff ranging from Brexit to why the eye department at HRI cannot organise their appointments.
I've been in a few groups over the years, at work and in college. Mixed feelings. The meetings for  NHS management to be avoided. We had an excellent rehabilitation team  - everyone signed up to the common purpose which was largely determined by the wants and needs of the service user - the patient. We met twice a week with an extra regular session to check how the team was performing - no one had a private agenda. We had counselling groups at York St John, but by then I had other stuff and I didn't contribute or achieve a great deal. Now groups, meetings and committees are a no.
The Thursday Team was quite different. Drinks and the quiz were the main activities and some moaning. A support group I guess. Like the leg on a table - helps to keep the thing up and running, solid and reliable. Retirement was the common factor. We all wanted it and we came together to share and listen how we were doing. Today I suspect health is the preoccupation. Not dour or depressing. More optimistic. 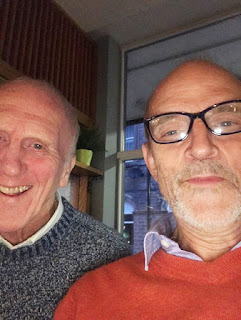 This is Eric, en route from Lancashire, Mirfield, Huddersfield to Lymington near Southampton. A twice a year journey. We walked together every week from 1994. And were still walking intermittently up to last year when we did the middle section of Hadrian's Wall.
Lakes, Coast-to-Coast and Reeth weekends, otherwise Derbyshire and bits around Holme Valley, Airedale and S. Yorkshire. Common threads included books, sports, families and mental health. I had it and a he was a psychiatrist.
An additional issue we shared was naff organisation. Booking the wrong days and wrong hotels was something we got used to. It always worked out. It was calculating our walking distances that was a serious problem as Eric is 10 years younger than me. I recall two energy-free episodes - one around Grasmere and the other at Corbridge. I made it largely because you cannot bail out up a hill, miles away from anywhere. After a few days I recovered.
On the C2C, Eric was going through one of his reading programmes. He'd reached Wuthering Heights. While I went to bed and slept 12 hours, he spent a happy evening communing with Cathy and Heathcliffe, first in the bath and then in the bar (clic here for the link).
We never had a cross word. Still don't. He's worried about his eyesight - a book person would. I'm still grumpy - it masks social and performance anxiety.

Older inspiring role models - we have been knocking about together for over 20 years. Not as fit today, but still active in many other ways. We haven't given up yet.