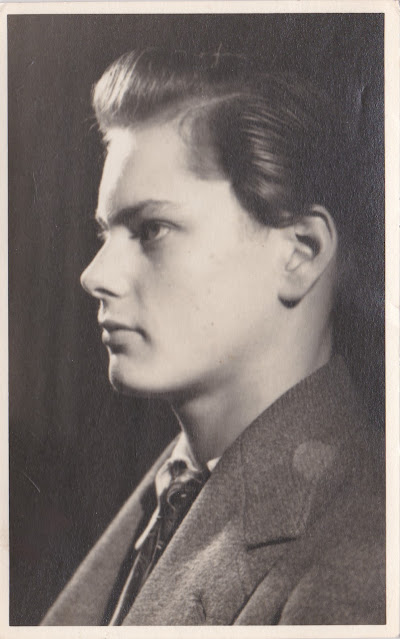 It has come as a bit of a stunner. Gordon died this month, into his eighties, covid. Apparently isolating in lockdown since the beginning. Kept afloat by kind neighbours, one clearly devoted - Chrissie. A phone call, e-mails. "Would I like to go the funeral?" " Yes, would you like me to contribute?" " Yes. Ok if I give the celebrant your email address?"

Stunner, not because it happened. But because I hadn't seen him since mid 1990s. A yearly Christmas card, from him and his son, Richard. This year just from Gordon. Chrissie told me at the 'crem' Richard died 12 months ago, a month before first lockdown. She said she didn't know why. What must Gordon have gone through? Lots of regrets from both older brother and myself that we'd not kept in touch.

The crematorium up in Fixby gives me the creeps. Attended in cycles. Granny Addy was catholic and was buried. Both grandads died before I was born. Otherwise grans, aunts and uncles, mums and dads have all taken their turn. Vicars who didn't really know them, even Michael, son of mum's cousin, who is now a canon in Almondbury. But you don't buck the trend, do you? The religious words are meaningful to a few, and empty for many. Gordon had a 'celebrant' who 'did the job' as they say.

Now it's the turn of 1930s and 1940s generations to pass.
.......................
So to the crematorium and my memories of Gordon.
From childhood to the age of 17-18 Gordon was more of another older brother than a cousin. Strictly speaking he was not a blood relative, but for a short while we were pals.
My first memory is Gordon living with his family up on the Sheepridge estate. About 1952. George was his dad. He and Gordon had come from somewhere in the midlands. I think Gordon had had trials with a football team their as a goalkeeper. I assume George was originally from the West Riding because we used to visit his mother and aunt, in Wakefield. Gladys, George’s partner, was my dad’s sister and stepmum to Gordon. Granny Walker who was Gladys and dad’s mum also lived here and Gordon when he was home from National Service in Malaya. He got his love of rum from here I think. We lived in Hillhouse, a short trolley bus ride away and visited each other’s houses alternate Sundays.

Then it was all change. Granny Walker died. We moved to Waterloo. Gladys and George went to Moorlands Road, Mount and Gordon started courting Adrienne, a feisty redhead from Birchencliffe. The two families still visited and when Gordon and Adrienne were there they took me under their wing. Took an interest in what I was doing and played party games. I went for tea to their house up the hill in Salendine Nook, behind the Baptist Chapel. They were members at Redbrook sailing club near the Standedge cutting and Sundays during the season, they taught me to sail.
Setting off in George's Dormobile was added to the Sunday visiting rota. Particularly memorable was 1995 and Southport beach. The day before older brother's 'O' levels. Cricket and trying to catch Adrienne off guard as she changed into her swimming costume. She was a good sport.

As a teenager, for a holiday job, George took me on to do odd jobs in his photographic studio. Gladys had the photographic shop on Victoria Lane. George and Gordon worked up in the attic of the old market, developing and printing. They also did portraits and weddings. So for a couple of summers, Gordon was my photographic mentor. In between the odd jobs, he taught me developing, printing and enlarging. We had sport in common and got on well, listening to test match special and talking about ‘Town’ and ‘Fartown’. I spent two summers in the dark.

Then all change again in the mid 1960s. The market was condemned as a fire hazard and eventually demolished in 1970. Gladys and George moved into the new Queensgate market. Gordon went to Timothy, White and Taylors and I left to seek fame and fortune.

In my day he was handsome, fit and strong. He’d a winning smile and a comb always at the ready to keep his James Dean hair in order. He enjoyed sports, rum, classical and big band music.

Regretfully, apart from weddings and funerals, Gordon and I lost touch. Although we did meet one last time on the 28th May 1995. ‘Town’ beat Bristol Rovers at Wembley and we met at one of the service stations where the football coaches took rest breaks.

.......................
Now back in the real world, I'm left quite a bit off-balance. Grateful to have been welcome at his funeral. Aware of the disconnect between my 1950s-60s stories and the other mourners. But mostly sad that older brother and myself had not kept in touch. It would be too easy to say that was the way he wanted it. As my primary school teacher used to tell me, along with an army of others, 'must try harder'.