A New Mill Singer talks with no one in particular

On the 11th of October 2014, New Mill Male Voice Choir and Sir Willard White were given resounding cheers and standing ovations for their performances at Huddersfield Town Hall. One of the choir reflects with his muse.

ANMS was sat in the kitchen looking up at the moor, still in wonder at the volume and length of Saturday night’s applause.

‘I was surprised really, and then pleased obviously. We always sing well at the Town Hall, but had we been something extra-special? The audience was magnificent. Three standing ovations are not to be sniffed at. Admittedly by the end, our admirers were already stood for Jerusalem.
I remember smiling a lot. Dentures are good for that sort of thing whilst being a bit of a hindrance for singing. I draw the line at waving.
Sir Willard had something to do with it. The public had actually payed to see him, yet they were cheering us long before he came on. Then they cheered him as well. In fact they cheered all night.
We finished with a four-item set, possibly be a neat way to bury a piece you’re not sure about. But, no, my fiercest critic, and others, have said In Flanders Fields was epic. Alan was inspired in how he put it all together. A fitting way for a choir to remember.
Just George was a great opportunity for our usual suspects to go over the top, appropriate in view of the last act. I admit to nothing more than a little theatricality.


And now a little later - surprised, pleased and ….. proud.’ 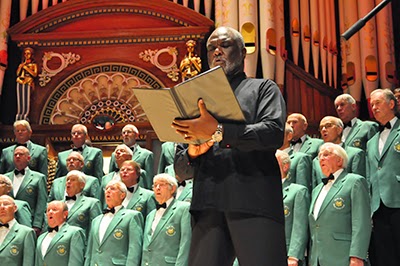