Because Lime Street was shut

Liverpool 70th. Parked at Greenfield. Change at Stalybridge and Liverpool Parkway, which you could drive to anyway. Merseyrail through stations such as Aigburth, home to a lovely cricket ground. Pitch up at Liverpool Central and an easy walk down to Pierhead. No great hassle.

The return journey was a little more complex. Liverpool Central to Kirby. Get off, walk up the platform under a bridge where the line is blocked and board the train to Blackburn, via Wigan Wallgate and Manchester Victoria, change for Greenfield. New territory, very flat and uninteresting.
The intervening stations however, Wigan, Orrell, Swinton and Salford are names familiar to rugby fans.

70 is a time from which you have memories. Orrell is particularly memorable for a evening fixture with Waterloo, a team in N. Liverpool I played for in and around the early 1970s. Waterloo was snooty and didn't accept Orrell as socially equal. They were a mid-Lancashire club with good players and results, but there was just that something. Anyway an end-of-season night match was arranged at Waterloo which we won. Yours truly scored in the corner from the base of the scrum at the railway end. Great jubilations, or so I thought. Fast forward to 2013/14 and Lockwood Park, home to Huddersfield RU where I met Mich Dearman who played in that very same match back in the 1970s - for Orrell. The weekend prior, they had won the Lancashire Cup and they were still high as kites - the spirits were willing, but the bodies were struggling.

Arrived. Off the train and another rugby league club. Just down from Greenfield Station is Saddleworth Rangers ARLFC, where I played between 1978 and 1982. They have just opened this amazing new clubhouse. 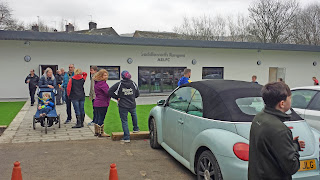 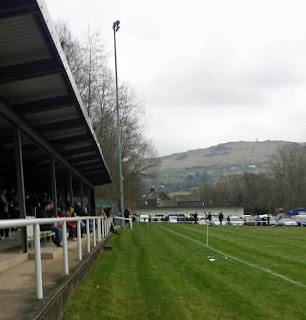 The first team pitch is overlooked by Shawhall Bank Road and the Transpennine Railway. The canal is just beyond the bottom touchline and then the river. Surrounded by hills topped of by the 'Pots and Pans' monument (a war memorial). Lots of large buildings, factories in production at one time, maybe still are but unlikely to be cotton or wool. So if it's possible to have a rural industrial setting, this is it. These pics below are the second team from Leeds Rd, Huddersfield. 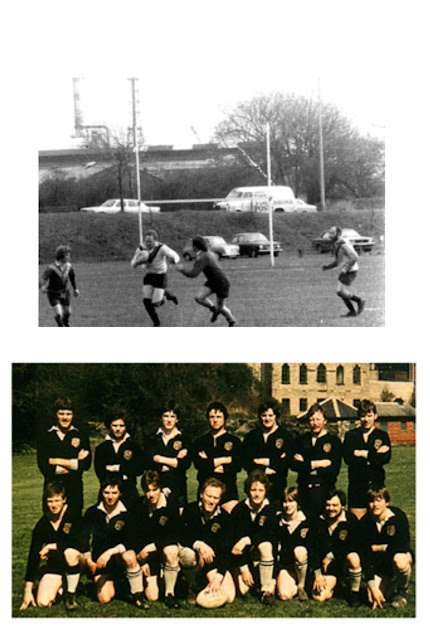 Youngsters, several professionals, great to play with. The action shot, ICI dye works in the background, is a pass from Dave Tyrrell, a super player and comedian.

You couldn't get further away from Waterloo, geographically and spiritually, than Saddleworth Rangers. Orrell is closer. All three teams have had their days at the top, and now thrive down the league structures.

I note from the Saddleworth website a section of past players' memories. These are mine.
I recall my first game - on council-owned Churchill Fields 'rec' that looked ideal. I soon realised it was boggy, but then everything in the valley bottom was boggy. They put sand on it - why? It ripped the skin off the knees. Protection was a must, pre-neoprene. Another piece of kit to wash every week. The coach was a little fellow with facial hair who ran The Friendship Inn on the way into Oldham. Brian Robinson played. The trains trundled in and out of the station. It rained. It was dark. We got very wet and caked in mud. And still we carried on. What was I doing here? Thirty monsters from the deep trudged back to the clubhouse and a wonderful bath.
The first training session. One of the problems of being a medic is that people ask you stuff. Ray Hicks was first team coach. Before the running and press-ups he asked all of us to have our insurance paid up by the end of the month. Insurance? What the ... do I need insurance for? Later, he singled me out, "Dave. What happens when one of the players stops breathing?" What? "How often does that happen?" "Well it hasn't, but what if?" Thank God for that. I don't remember my reply.
Going to away games in back of a battered van sat on wooden forms down either side in the back.
We went away to Blackpool with the youth team who had made the national final against Hunslet Boys. Me and Rolly Lloyd. We lost, even with the likes of Terry Flanagan and Nicky Kiss. The open age final was Pilkington's Recs and one of the Hull teams. Pilks had an ex-pro who put it about and, inevitably, I was asked to see a Hull player with a nose like the letter Z. Nothing I could do. We stayed in a couple of classic Blackpool B&Bs. Some of the players just came for the day. They didn't return home, staying with us, doubling up in bunk beds. Imagine? Twice the number for breakfast, but the landlord didn't seem to mind. The Pilks guy I came across many years later. He'd nearly died after joint surgery.
70 year olds hear about friends and acquaintances losing their loved ones. So, on my recent visit, I heard about the guys I used to play with losing their wives. Very sad. It put me in mind of Peter Goddard. Much loved successful coach. Larger than life and massive in stature. He lost his battle with himself. But the thing that saddens me most was his omission, by me, from the Saddleworth Rangers 50th anniversary brochure. Every beggar else was mentioned.

So, an odd railway trip and rugby memories brought about by a wall falling down,.