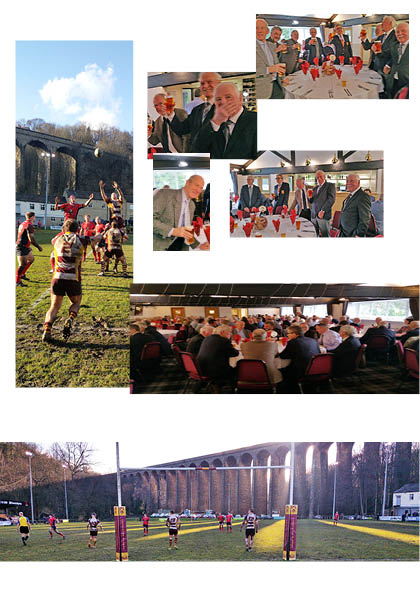 The choir cycle team were guests of Ibbo last Saturday at Huddersfield RUFC's pre-match lunch. Three non-cyclists were also invited, including me, which was nice. Thank you. I sat between Geoff and Tom. The conversation swung between "you what" and "eh" accompanied by leaning sideways in an attempt to engage a good ear.

Tom and I shared a dark truth. Reluctantly, after years of solidarity, neither of us support Labour. Both from working-class backgrounds - Tunstall, Stoke and Hillhouse. On election day 1970, in Liverpool, when I announced I was off to vote, my five indifferent flatmates followed and voted tory. Heath surprisingly beat Wilson. It would be too much to ask who I am voting for now, but after our confessional I feet relieved that I have finally 'come out'.

We sang Cwm Rhondda and most of the diners joined in the chorus. We agreed the choir 's informal 'afterglow' repertoire would benefit from five or six competent pieces sung as a choir, to complement excellent individual performances. We miss Ged. We were reminded that such a song-sheet exists, put together by Pete, who we also miss. Steve was pleased with a possible strap line for the sheet - 'Hand-picked and hand-pulled'. You read it here first.

The game was middling, between two middle-of-the-table teams with no trophies left in their seasons. Chester had a the better second half. Their kit man was an old friend from cricket and rugby days in Northallerton. Sadly I couldn't stop for the customary 'few beers'.

5.30 pm, the team decamped to New Mill Club to catch Town in the cup. I gave Derek and Andy a lift. We shared our concerns about Facebook. Much of it is banal. There is a lot of cringeworthy self-confessional rubbish - see above. Seriously, it opens up people to abuse. If you need to stay in touch, call or send a message. If you need to talk, find a real person and go for coffee. Both were complimentary about the blog. The difference is I'm writing for an audience about stuff I think they want to read.

The choir and its cycle team have more years behind than in front. Many of the lunchers were similar. Inspiring ageing is about keeping mentally and physically fit, like sharing interests and problems with guys who don't take you seriously. Growing old is simply the 'elephant in the room'.