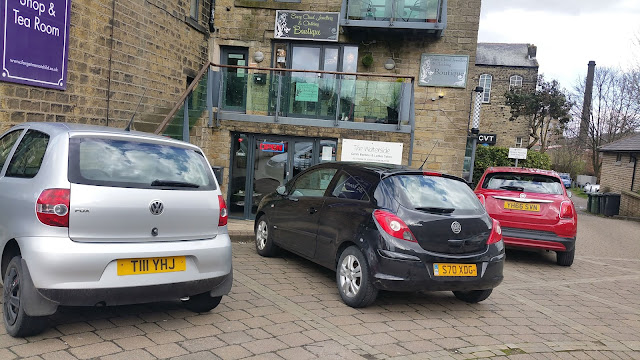 On our way for lunch after getting my fix from Darkwoods. Way overdue for a haircut. I'll pop in here.
Big bloke, big beard, big tattoo. Sat in the entrance hall, behind a desk.
"Any windows?"
"Yes, several," pointing to the floor-to-ceiling glass all around. He then stood up, even bigger than sitting, and pointed to an empty chair.
"What can I do for you?" Accent of an antipodean.
"Number 4 all over, ears and eyebrows."
I thought I'd check out his netball, but he was New Zealand, who are number 2 in the world, though not at the moment. He'd heard of netball, and rugby come to think of it, but obviously not his main subject.
Two thirds done, "That's a lot better," observing his handiwork.
"Yes it gets in a tangle."
"Well you do have some fine areas. I'd worry if you were 21."
"It takes five years off me."
"Age or lifespan? That will be a fiver."
Who said I was grumpy.
Called in Aldi for some cheap cans and lunch at The Huntsman which was not cheap. Good Saturday mornings work.
Posted by David Walker