Shallilo reminisces as he watches sheep being sheared 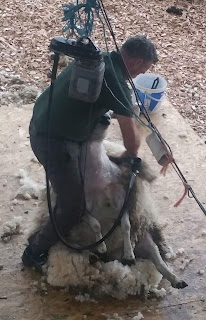 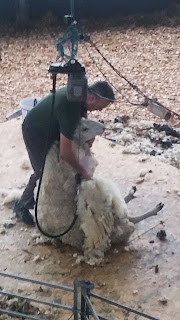 I was fortunate to watch this in the flesh back in the early 1980s up on the fellside in Swaledale. Nicholas, my young nephew, and I were camping at Usha gap (see It started at Usha Gap). We walked a little, and somewhere near Low Row we came across a sheep fold where a very hot farmer was shearing sheep with an enormous pair of scissors. Here it's electric, but just as hot. Soon after the Swaledale trip, I started my first senior medical job in Northallerton. On the doorstep of the Dales.
Sheep shearing is the first step in a long path to a piece of cloth. From the lowliest millhand to the exalted company director, almost everyone in the West Riding relates to the processes of textile manufacture. In the 1820s, Eli Walker, from Yew Tree Lane, Lindley, was a clothier. I suspect this meant he worked in some way with wool, rather than in the business of buying and selling cloth. His son William, born 1854, helped run the boiler at Sykes' Mill, Lindley, before labouring in a card clothing company (the machines that disentangled wool fibres). William married Harriet Bailey in 1882 at the New Connexion Chapel, Lindley. Harriet's father, Eneas, was a smallholder from Cowrakes, Lindley, described as farmer, weaver and journeyman. Prior to the growth of the factory from 1830 onwards, textiles depended on families in scattered homesteads up in the hills of Halifax and Huddersfield (see early family trees). Journeyman meant he had served his time as an apprentice. Subsequent generations worked in the mills and dye works, right up to my granny Addy, who died in 1994 and who was a woollen twister (part of yarn spinning).
To know your personal heritage helps keep your feet on the ground. Despite mixing with rugby union toffs and plummy hospital medics, I managed to keep one foot in the back streets of Hillhouse and Waterloo, albeit with the dubious reputation for being a professional Yorkshireman and quite brittle with it. I still regularly polish my shoulder chip.
In the early 2000s, I played cricket for a Huddersfield Sunday team called the Almondbury Casuals. The history of its early players in the 1950s and 60s was of owning and working in senior textile manufacturing positions, part of well-to-do families who could afford private education. The team I played for was more eclectic, but the shadow of the past loomed over us. When I started a Casuals archive (see Casuals History) and perhaps overstated some of my views about golf clubs and public schools, the word went round. Sadly the club has now ceased and the guys from the 1950s and 60s are dying out. Everyone remembers the club with fondness.
It's another story of square peg in round hole. A consequence of parental pressure, passing the eleven plus, attending an ambitious grammar school and seeking fame and fortune in a foreign land (the medical profession). All remembered by taking my grandson to Cannon Hall and watching a man shear a sheep.