Don't let the old men in - an inspiring and affectionate tribute 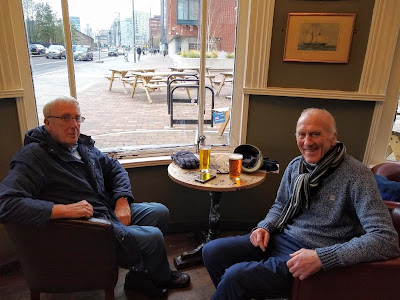 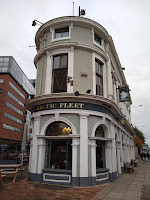 Here we are in the 'bows' of the Baltic Fleet pub, across the road from the Albert Dock. It is okay over there, but take a big breath before buying beer or lager. Here is rough and ready with loads of choice of real ales and £3.50 per pint. A real fire as well.
It's a spot we went to as students, maybe once or twice when we were on a 'firm' at the Southern Hospital. In the late 60s/early 70s. Don't ask, but yes I lived in Liverpool in the 60s. 'Free love' passed me by and I remember most of what went on so I couldn't really have been there. Today I met older brother at Lime Street and he suggested here after a mediocre coffee in Liverpool 1. Inspired choice. He is the one on the left.
What do we talk about? - family, illness, family illness. Where did it go? Time that is. Where are we now? The Baltic Fleet. It was quiet and there were moments when we were the only ones in. We had quiet moments too. Even the barman left, though he did take the pic. 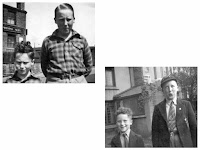 So what's happened between then and now? GOK. 1953-2019. Work mostly. He was a Liverpool University chemist. I moved round a bit as a medic before returning home to the W. Riding.
He is now heavily involved with the scouts around Widnes and gets a lot from it. Sounds as though they get plenty of him too. I write a bit and sing a bit and try to keep out of the way. Oh, and I drink Guiness or blonde.
It's iconic. Two old geezers in a pub down the docks.

The Mule
Clic on the link for the trailer. A Clint Eastwood film and the song 'Don't let the old man in'.
An 85 year old gets back in touch with his family after a lifetime of being away, especially when he was most needed.
And the circumstances of this epiphany? Being a drug mule for a hispanic cartel. He is just the same as always - not worried about what he says and does - missing, driving long road trips listening to country music on the radio, dancing with young and beautiful girls, referring to his new colleagues as negroes. His bumbling humanity, which makes the him difficult to track by the police, wins over the hardened criminals.
Finally he befriends the cop who is running the search for this elusive mule. Over coffee they talk families. No spoiler alert here.
The film and the song are about all of us who have at some time in our lives got the work/family balance wrong. But mostly for me it is an affectionate tribute to older men who just are. They can't help being themselves even when guess what is just around the corner.

Alison Joyce, the Times, November 23rd reflects on her experiences of caring for 'end of life', dying and funerals.
'In a society that exalts the virtues of autonomy, independence and choice, we can find ourselves ill-equipped to deal with vulnerability ...'
'The natural process of ageing steadily erodes many of the things that we assume give us identity and a sense of worth ...'
'There is nothing romantic about the process of dying.'
Yet given these ultimata, maybe we discover what it really means to live. 'There is something profoundly human about acknowledging our need of others ...'
I agree with all of the above. Can I extend these ideas to apply to any change, but especially retirement and ageing. I think it's a tad late to wait for a terminal diagnosis to affirm relationships - even ones that we think are broken. It's also a great time to reinvent yourself and be that person you always wanted to be. Bowie said this not me.