The garden keeps giving, from our wildflower patch to the clematis. 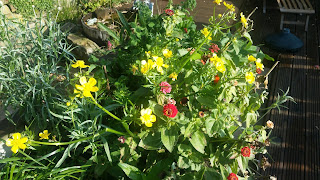 To date, I have not given my new hair trimmer a go, much to the amusement of Rod Gooch who gave me the idea. This weekend in Scarborough, the fear left me and off I went, following the advice of that young local hairdresser. And, small amounts appeared and my hair looked shorter. The childbride cleaned out the neck'ole. It's not as good as the hairdresser, but good enough for a few weeks before I go and get it corrected - maybe a Christmas present to myself. It is a number 4 and not quite as easy as a number 1 which is basically let's get bald. Which Rod and my son Chris are - down to the wood.
It's a new skill.

I had a major let-off in Morrison's yesterday. Choosy with white wine, the box was empty. Underneath a new box covered with the price. Underneath again, a new available box which I raided. Then my conscience. What if others do as I did, then there could be a collapse - the full one with the price overcoming the gradual depletion beneath? Back I went and removed the one with the price followed by the one I had used. Little did I know that this latter box had a wet and hopeless bottom. It shredded when I moved it. Four bottles of Chardonnay rolled towards the checkout. Two of them had bounced. No breakages. Phew. No one clapped, but there were several startled glances. One lady did speak, with sympathy I think, but I can't remember. A dry box was available and all was well.
What does this say about a good deed?