Can I inspire my older brethren to read Brian Cox while drinking Guinness? 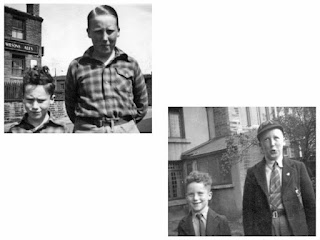 Me an' our kid. Yes, we were dressed to match. Older brother with the brylcreem and me with the 'coconut' look favoured by my dad and his mail-order manual shears. Has anyone else been subjected to this abuse - a lone chair in the middle of the kitchen surrounded by pages from the Examiner? And the style is back in vogue? To the left, Willow Lane, famous for the Slubbers Arms behind us. Right, the yard behind the Engine Tavern. The yard had a communal wash house originally built as part of the public health strategy for cholera.
The houses round the yard all had cellar dwellings. We used ours as a coal 'ole. It had a window.
There are five years between us brothers which was massive at the time of the pic. Why put this up? GOK, but thinking about what it is to be human involves a little bit of musing on life stages. Not too much, there's still a bit of future left.

The following are the titles that have brought me up to speed with some current secular thinking on what it is to be human:

Whilst these titles don't easily belong to the scientific establishment, their overall message is clear. They are popular yet stir up enough to get thoughts going. There are plenty others and sorry if I have missed out your favourite. Mine is Pinker followed by Cox.

Brian Cox wrote
"What is meaning? I don't know, except that the universe and every pointless speck inside it means something to me. I am astonished by the existence of a single atom, and find my civilisation to be an outrageous imprint on reality. I don't understand it. Nobody does, but it makes me smile."

That's all right then. Brian is a smiley person. There's another volume out this week reports Tom Whipple in the Times, 9th November. Transcendence: How Humans Evolved through Fire, Language, Beauty and Time; Gaia Vince, Allen Lane. These books are all part of the genre known as '30,000 foot books ... which sell an explanation of everything' - coined in an article which appeared in The New York Times Review. Books that see everything through the perspective of a 747 - miles up in the air.
You may have some favourite bits of stuff. Here are mine I haven't forgotten yet:

My pal Clive thinks computers will take the next steps in understanding what it is to be human. A machine with intelligence and self-awareness. Wow - who can that be?

When my big brother went to grammar school, within a few months he had learned everything. I got to a similar stage by 18. He'd been a university chemist for 5 years by then and what he didn't know about stuff? Ploughed different furrows since. Usual stories - bumps in the road, blind alleys, some successes. We both spent our professional lives learning more and more about less and less. For my part at the expense of more important stuff. So, catching up with the question 'What is it to be human' is a challenging and rewarding way of spending time when I'm not playing with grandchildren or going away for long weekends with the childbride or drinking Guinness.
Posted by David Walker