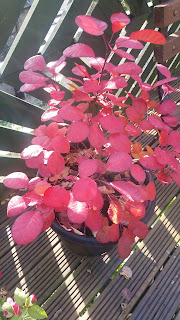 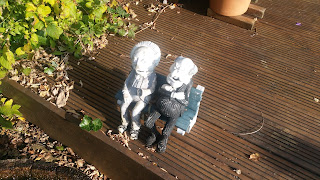 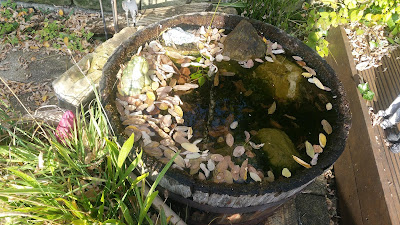 That same visit to Morrison's as the wine incident, at the checkout I noticed the young lady assistant was not wearing a Halloween accessory, as many of the staff were. Seeing as it was Halloween. "Where's your hat?" I asked innocently enough. "I don't have one." No smile, no banter, just a muted tolerance. Probably eyes gazing at the heavens, but I'd ceased seeing by this time.
What is it with young women these days?

I visited the eye clinic today. Two years since I'd been and out of the blue, an appointment dropped onto the mat - into the postbox in our case. My previous consultant left and the replacement was trying to catch up - two years. I'd been privately, so my eyes were okay, but it's £170 a pop and if I need my cataracts doing it's £1200 each. My other diagnoses for those interested are viral keratitis, astigmatism from the viral scars and mild macular degeneration. With glasses happily my eyesight is excellent.
Today I only waited an hour to see a 15 year old lookalike who confirmed she was a consultant when I asked. She suggested I monitor my symptoms and get to her early to prevent further damage to my cornea. I didn't take offence at this. Assertively, I confirmed my familiarity with my own symptoms and any previous damage did not occur as a result of my delay. Two senior doctors got it hopelessly wrong despite me telling them the diagnosis. Anyway the right guy eventually took over and then left. So, what about trying to get an a non-routine appointment from the worst appointments department in the world? Nay the universe. "Phone my secretary," she said. So I will. My routine attendance will hopefully be in 12 months - yippee.
She was thorough and gave as good as she got.
......................................................

I then went for a coffee - nowadays they have coffee shops in out-patients. With a young lady serving.
"I'd like a medium. How many shots is that?"
"What sort of coffee?"
"Americano."
"Three."
"That's a good one, yes please."
"Do you want milk?"
"I like to taste first."
"Is that a yes or a no?"
"It's a maybe."
She then went on at some length about levels in her cup so I concluded she didn't do maybe. Not a flicker, of annoyance even. Muted tolerance with just a hint of boredom.
What is it with young women these days?

Finally the childbride and I went to pick up a spare wheel for our not so new car, but recent. I don't do these new-fangled blow up tyres. I thought I'd ordered one when we fetched it, but earlier this week I tried to stop something rattling around in the boot and noticed the absence of a spare tyre. Our Suzuki son-in-law was dutifully informed of this oversight at Sunday's meal and promised to rectify said issue. Hence our visit.
Sheila parked and I went to see Matthew, the Suzuki s-i-law. We strolled down to the rear car park, him with the wheel. Boot open, Sheila about to lift whatever you call a shelf that covers a spare wheel. Bl... H... and all other swearwords beginning with 'B', if there wasn't a spare wheel, pretty as a picture. Guess what? We have two shelves that cover the spare wheel, with quite a large space in between to facilitate extra luggage when the need arises. I had only opened the top one in my search for a rattle.
"Good job we had it in stock," said Matthew.