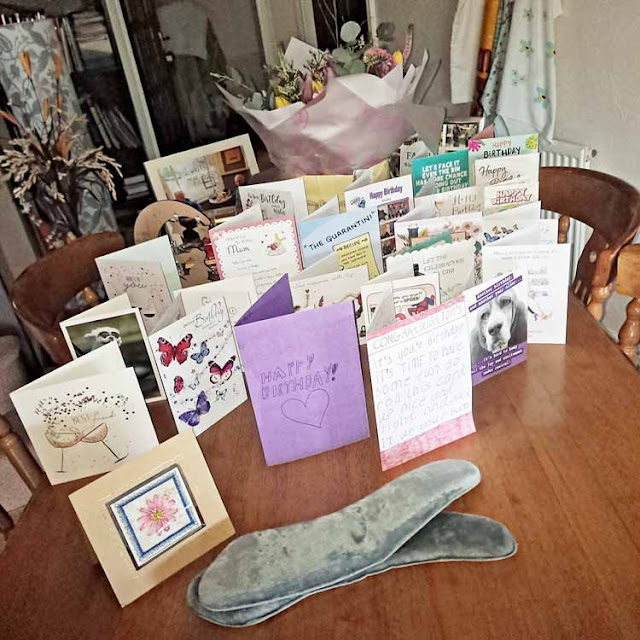 Sheila's birthday. The furry foreground things make more comfortable private sitting arrangements.
Now for the second instalment of my sporting moments.
Botham's Ashes: England vs Australia (1981)
No need to spend time on the cricket - legendary doesn't cut it. Stratospheric possibly.
But I hardly saw any of it. I was working at Manchester RI, researching down in South Manchester at the David Lewis epilepsy unit. Did anti-convulsant therapy really produce bone problems or was it all due to the residents staying indoors? So we'd to go every day to supervise the wearing of sun badges that measured how much time a resident spent out of doors. And blood letting. Two of us - Peter Carr as well. The unit had an old imposing headquarters building complete with approach via a cricket pitch. Out-of-use staff facility. Another era.
This is the MRI medical unit team. We played in the university evening league. Here we are in a Sunday afternoon challenge match against a Delph and Dobcross select. A beautiful ground up in the hills. We won with the help of two local ringers and their best bat out to an early caught behind. 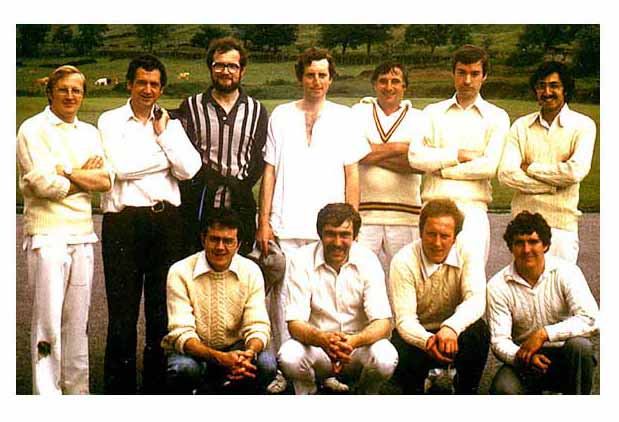 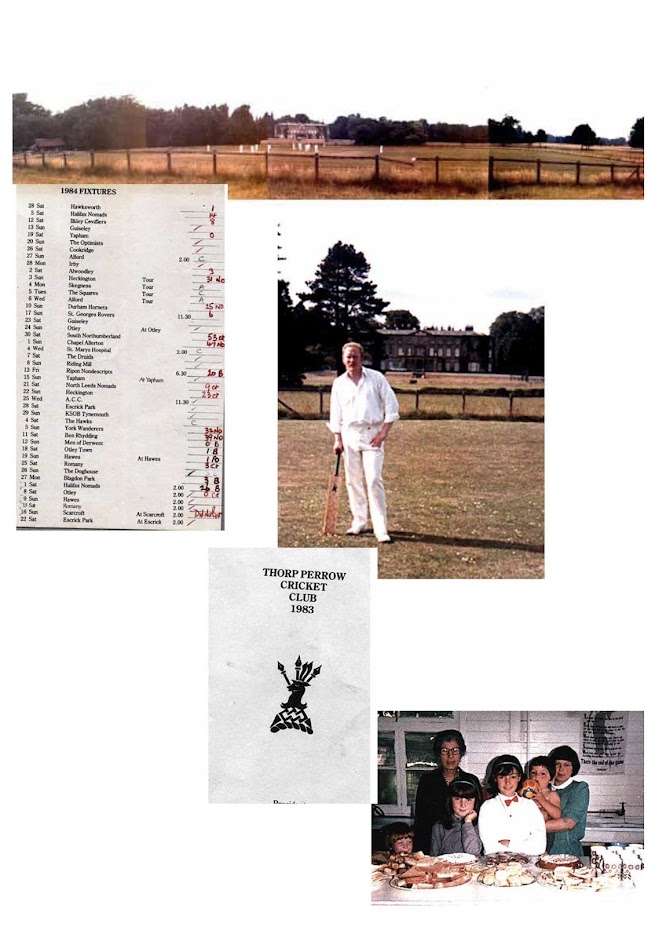 I was working in Northallerton. We lived near Bedale, virtually on Sir John Ropner's estate. This was country house cricket. Long fixture list, playing both Saturday and Sunday. North East and Yorkshire. mostly. Everyone wanted to play here, BBQ and have a few beers on the boundary. The tea ladies were splendid, including Louise and Andrew. I never saw much of Sir John. Most of our team were local, with some input from Catterick Garrison and guys that our skipper knew - included a Theakston or two. I guess the standard was a reasonable league second team.
The Northallerton evening league included the rugby club. Fixture list made up of teams dotted along the A19. At the level of shooing sheep off the pitch to get started. The NEEB strip was on a plateau above the level of the outfield. We had to shout and guide fielders to the ball. Rugby club square between first and second XV pitches - sporting to say the least. Dave Hale got one delivery which bounced in the bowler's half first, rolled a bit and then reared up off a length to hit Dave dead centre in his specs and broke his nose. The rest of us fell about.
I used to wave from square leg to the Middlesborough express as it trundled out of Northallerton station just beyond the boundary. 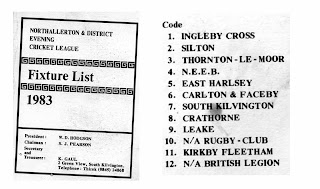 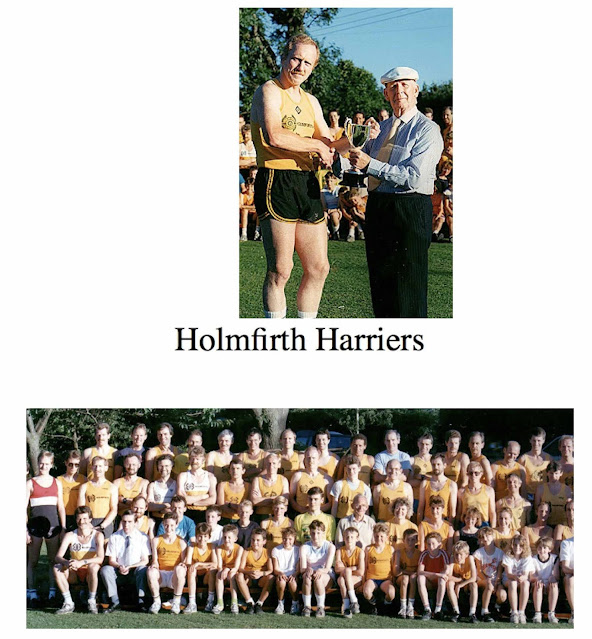 I ran with the harriers for 4-5 years. Introduced by a guy I'd been out to a random dinner with - roughly the same standard. The elite 6 minute and below milers didn't mix with us slow oldies and youths. Got their comeuppance in the 5 mile handicap. We all set off at the same time - none of this going first and being run down. I was given 20 minutes and won by 2 seconds. Was first past the post pissed? You bet. No handicap for me after that. I'd run out of my skin - the only time I ever got under 7 minute miles. I saw the red mist just the once, at the end of relay fell race. I'd been selected because there was no one else. Bit like Casper in A Kestrel for a Knave. Finishing straight and a woman was overtaking me. That just wasn't going to happen. Catch for Almondbury Casuals against Jacob's Well (2005)


‘Fielding at long off and long on can be a lonely business. Most of the time, nothing much happens and then suddenly something serious comes along. Jacob’s Well had kept a big hitter in reserve, down the order. He proceeded to clout The Casuals’ bowling and looked like he would win the game for them. Then he hugely skied one toward long off where Dave Walker was fielding and the action seemed to slow down. Up and up it went and everyone, including Dave, began to realise it wasn’t going to clear the boundary. Will Ward recalled thinking “He’ll never take that, not after The Jesters”. Silent and open-mouthed, aware of Dave’s frailties, others waited for the scorer to record a four. Mercifully the ball had gone too high for the infamous Thongsbridge industrial backdrop to be in play. It was a black orb against a clear sky. Dave walked in, too far, stepped back, too far. “Is he doing a bloody waltz?” Bill Crossland remembered asking himself. Dave said later he was simply getting a sight on it. But the ball was still in the air and dropping steeply. Dave then raised his right arm, pointed at it, straightened his neck and closed his left eye. On a moorland estate he would have been drawing a bead on a grouse. The action returned to normal speed as the ball plummeted and stuck in Dave’s right palm. He fell over. A short stunned totally silent second, and the Casuals ran as a man to long off. “Never in doubt,” said Greg. Handshakes, back slaps, smiles, jokes as the astonished batter walked back to the pavilion. The catch was a game breaker and Jacob’s Well never recovered.’ (here is pic of me and the fielding prize) 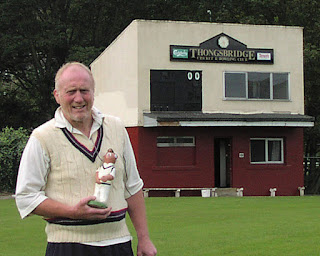 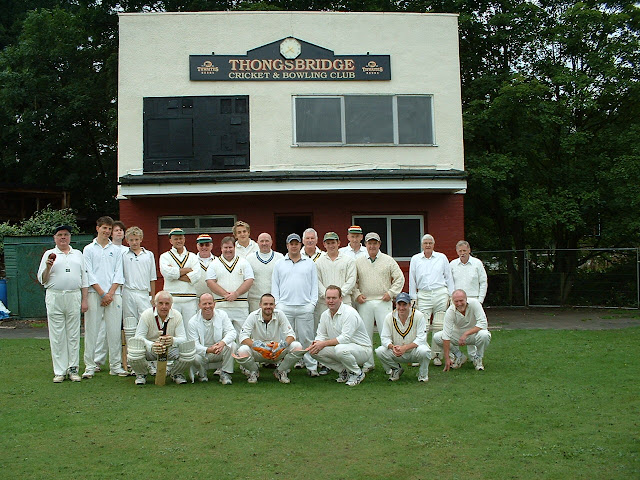 I note from the score they were only one short, so not quite a game breaker. Funny, no one ever remembers who the bowler was. The Jacob’s Well is a public house along the Woodhead Road in Honley, the village next to Thongsbridge. Their cricket team is made up of local drinkers and plays in the evening leagues. I knew a few from my time with Honley Juniors soccer and I was quietly pleased with the result.
Interestingly the Casuals played at the 'Retreat', a big mental hospital in York. Like David Lewis in Manchester and Storthes Hall, Kirkburton. Great staff facilities in lovely settings. Another era.
Bowls/Boules double champion (2020) Friday boules with David and Ann Talboys
We are privileged to be made welcome every Friday to the Moorbottom boulodrome. David and Ann have lived here for nearly 30 years. Francophiles, they espouse all things French, including pétanque. A large garden and gravel alley roughly the size of a cricket strip. Additional random inch to two inch stones provide a sporting challenge. There is a routine: David keeps the records; Ann makes coffee and tea; boulists bring cake.
David is a U3a boules tutor and Moorbottom is home to annual competitions - Honley Ladies Choir and Holme Valley Fitness. Annual Christmas concert - Alan Brierley, musical director, is a boulist. 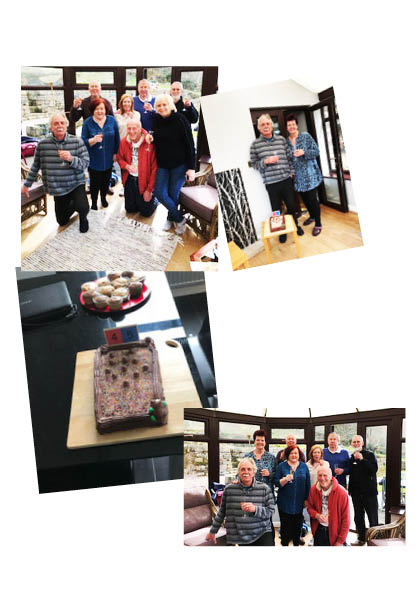 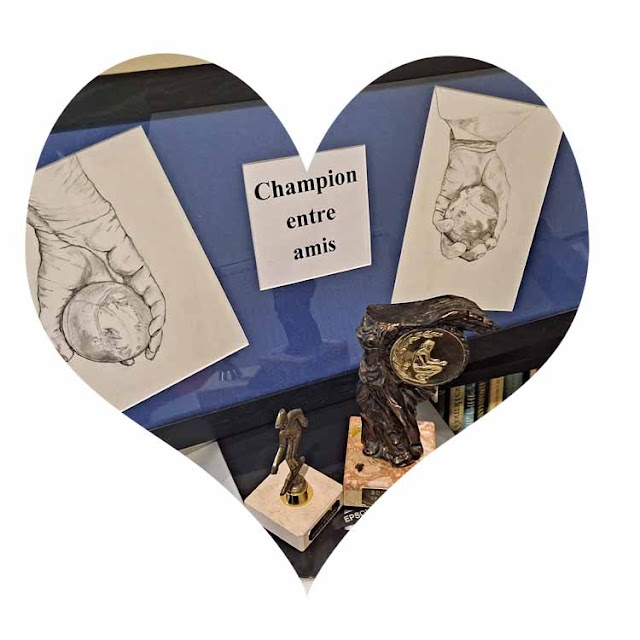 If you can bear another, then sporting memories (3) next week - rugby.
s
Posted by David Walker