New College 1963-66
Dalton St Pauls/Deighton CYC RLFC's U17s
New college was founded in 1958 when the existing Huddersfield College (founded in 1839) was merged with Hillhouse Technical School to form a new boys' grammar school at a new campus at Salendine Nook with 950 boys.
Huddersfield College was a soccer school with connections to Huddersfield Amateurs, Elland. Hillhouse Tech was known as the Redcaps. My dad was a former pupil and I think they played rugby league.
New College had houses and the prefects wore gowns. A large proportion of the sixth forms went onto higher education. Soccer was played and rugby union was introduced - feels like it was the thing to do rather than play rugby league. Hawes is the master on the pics - Ron Capper, a winger with Huddersfield RUFC was the first coach of the XV. He taught geography. It became a sixth form college in 1973, so the team had a life maybe of 12-15 years.
We had some tussles with Barnsley GS and Normanton GS, Wakefield. Heath, Crossley & Porters, both Halifax. Silcoates, Wakefield. QEGS wouldn't play us.

We still meet every 2 years. Clic on link. 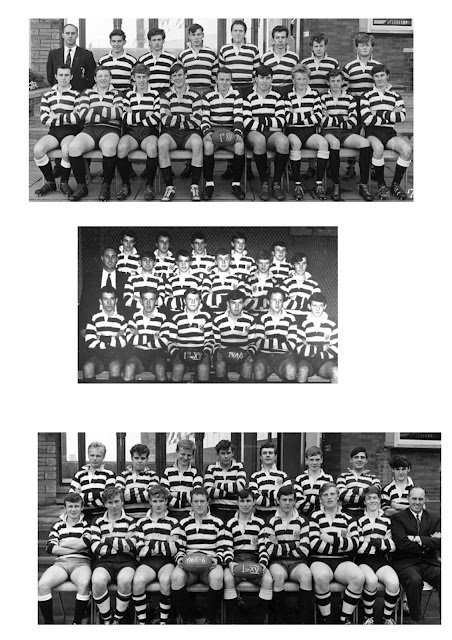 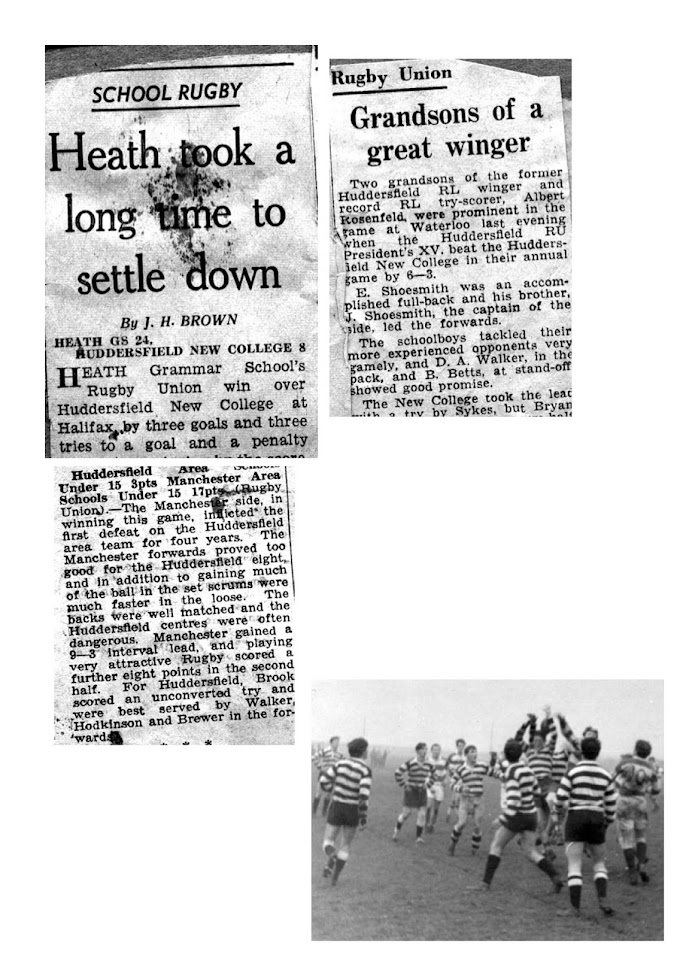 5 or so played rugby league on Saturday afternoons. Dalton St Pauls was a Methodist youth club run by Martin who was keen on league. The club folded and we moved across to Deighton. I didn't play every week because dad said not to.
Huddersfield RUFC 1966-68
Short period with Huddersfield. I remember travelling to Birmingham and Sheffield at home. Halifax night game in the cup. I played for the first XV whilst in the sixth form and during holidays for the first year away at university. We had a decent team, county players. Three medical students - the other two from QEGS, Wakefield.
I also trained with the YMCA at Laund Hill, Salendine Nook but never played for them. 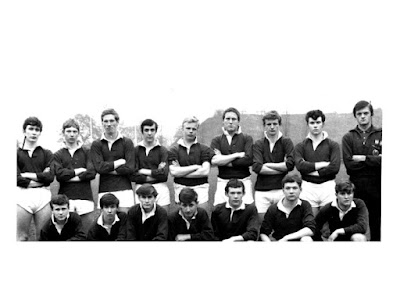 Huddersfield RUFC schools/colts 1965 approx
Holme Valley, New College, Greg's/All Saints, ?other
This colts team was a one-off, but it did get a life soon, the forerunner of a great junior section.
Waterloo RUFC 1968-72 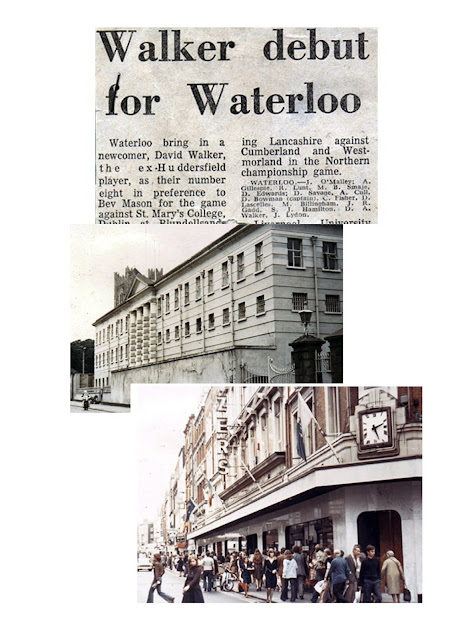 Between 1968/9 and 1972, various teams - started in colts. These pics represent a low point. We played Dublin Wanderers at Lansdowne Rd and St Mary's the following day. In between three of us were the guests of the Irish Government. Shown are the bridewell and the flag we tried to pinch on a large high street apartment store - Switzer's on Grafton St. Not sure whether it's still there.
Cannot avoid mentioning the medical school team in Liverpool - the reason we played for Waterloo rather than the university team. We played Wednesday afternoons against other med schools and local colleges. Had the almighty bar room brawl at Birmingham University when Andy Thompson chucked a full pint over his shoulder.
Llandaff 1972-78 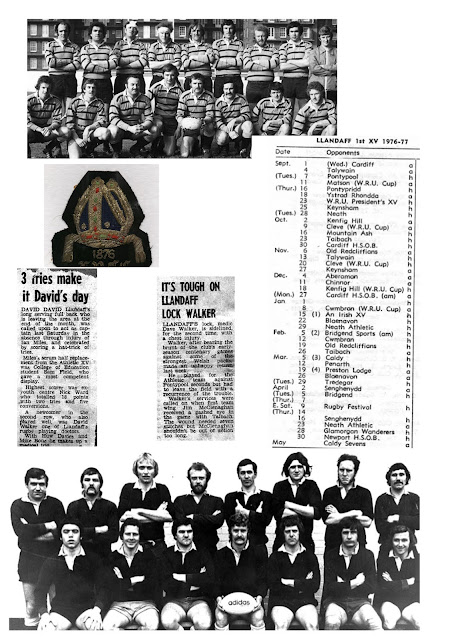 A super second tier team, cup winners and league champions or runners-up in the Glamorgan section. The centenary fixture list includes a number of first tier teams. Pontypool front row etc. Match under lights 'down the Arms' - the pic shows me falling over. Nearly beat Ebbw Vale in the cup. There were no easy games. Travelling up the valleys was a prelude to a battle - Talywain the most bloodthirsty. Blaenavon a small ex-mining village with two teams. Meeting up with a few of the guys who took part in my survey of families with Huntington's Disease. Our closest rival, draw in the league and a loss in the championship final, Abercynon.
The top pic is 'down the Arms' before a cup final. We had a local gp who kicked them to death, whoever they were. Bottom pic outside the clubhouse before an evening match. Great location next to Llandaff cathedral. We were all Brains' dark men. Steward had to get bottles of the stuff in as well as his usual. 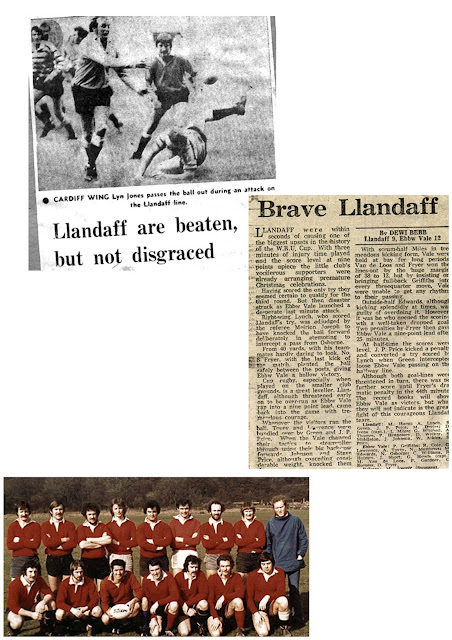 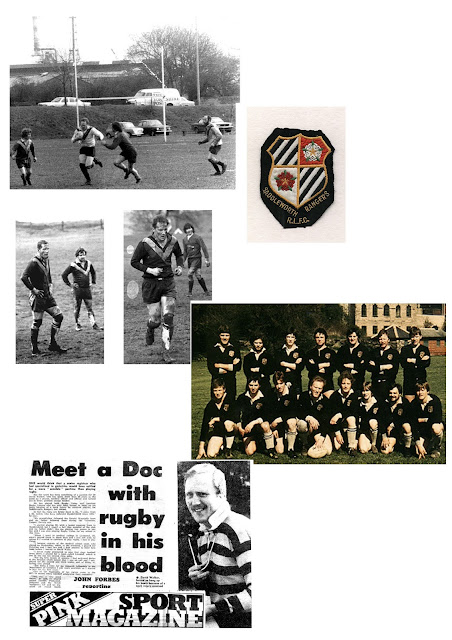 We pitched up to live in Delph. Shared a boundary with a policeman, Brian, who bred King Charles spaniels and raced greyhounds. He introduced me to Rangers who played in Uppermill. The coach was an ex-pro. His first question was "What do we do when someone stops breathing?" My reply "How often does that happen?"
The top pic is Leeds Road playing fields against my old club Deighton. Middle is somewhere on a ploughed meadow in Bradford. Then the second team at Leeds Rd - three pros included. Bottom - the reporter was on the Manchester Evening News and Brian caught his interest - my grandad being a pal of Douglas Clarke. We went over to this bloke's local. Closing time and he ordered four pints. "Oh thanks" I said. They were all for him. Met him again at The Farrers Arms in Uppermill. His wife sat in the car the whole interview.
Northallerton (Fettlers) 1982-85 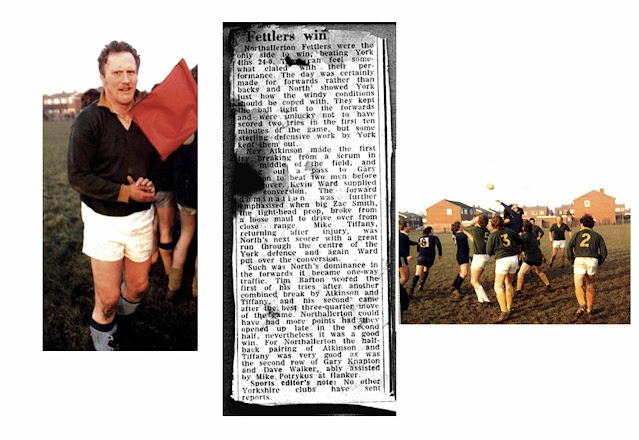 The bottom team - a refuge for old slow cowards and blind youth. Often short; travelled to The Stray at Harrogate once. We borrowed a spectator who was a soldier visiting his girlfriend - someone must have had a bottomless kitbag. 13 a side and we won. They were miffed, our soldier scored the winning try.
Old Brodleians (Vets) 1986-1991
I'm not sure I played the whole five years - it's just I've always said I retired aged 44. Highlight was a Benelux tour. I'm still looking for the pics.