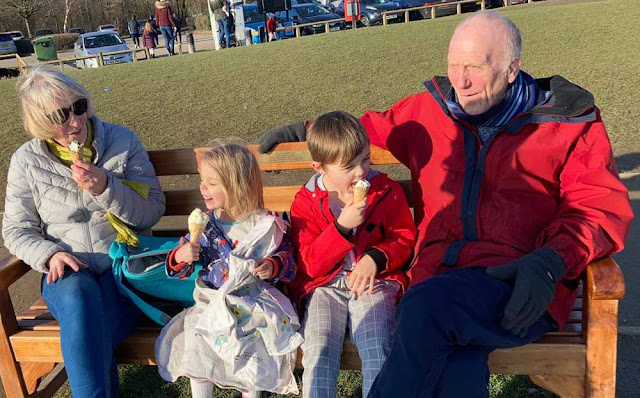 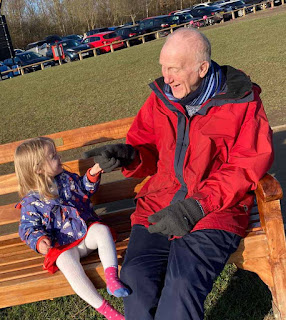 Baldy rosy cheeks still has a role in teaching the important life skill - eating an ice cream cornet
This is our child-care bubble
Dave's Sports Review
Where were you when these sporting moment happened? The idea is borrowed from Simon Barnes in his book on sport. My list is biased to me - great to relive some moments and what was happening at the time.
What started as a objective list has turned into an indulgent trip through a bit of my sporting past. I've split the events into two.
Chataway vs Kuts (1954)
Chris Chataway was one of Britain's finest middle-distance runners in the 1950s. A member of the Olympic team in 1952 and 1956. In May 1954, he helped Roger Bannister break the four-minute mile before achieving his own world record in the 5,000 metres four months later. By the end of the year he had become the first person to be awarded the BBC's Sports Personality of the Year.
He beat European champion Vladimir Kuts in a nail-biting finish in the London v Moscow match at White City athletics stadium in West London.
We had a black-and-white TV the size of a matchbox. The plug fizzed and smoked and the TV needed a clout to get going. We were living in Hillhouse when we bought it for the 1953 coronation - the only one in the street. Busy day street party in our small kitchen. So we took it to Waterloo, Huddersfield, when dad got a mortgage. Watched most things in a limited schedule including athletics which we weren't into. I remember the race as special - because of the finish and because it was on TV.
I was playing soccer at right back, or soon would be, for Dalton Primary in the Red Triangle League. 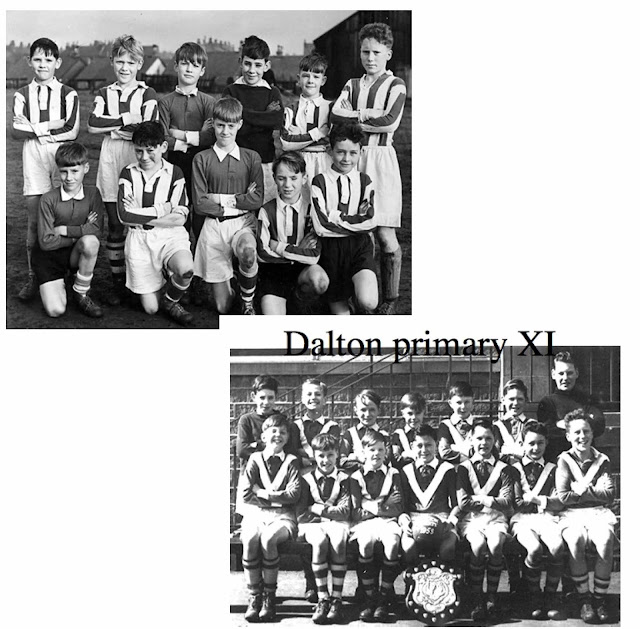 A motley crew, though well scrubbed up for the cup pic. Alec Eales is the giant on the back row. He came from a family of giants - butchers I think. The team in assorted shirts is at Paddock. Mine is cousin Gordon's lace up 'Town'.
Town vs Wolves (1960-61)

Town finished 20th with just 35 points, the 'closest shave with relegation in their history'.
The season is best remembered for our exploits in the FA Cup. The 3rd round match against the holders and Division One leaders, Wolverhampton Wanderers. Town travelled to Molineux Stadium with virtually no chance of victory. Managed a 1–1 draw thanks to a goal by Stokes. The replay at Leeds Road was the first match under the Denis Law Lights - transferred to Man City. Town won 2–1 (Stokes and Michael O'Grady). We lost to Barnsley in the next round.

I used to stand at the Kilner Bank end, hoping to be with Sheila Sykes who use to go with her dad. Stokes' goal was a glancing header from a short O'Grady cross right in front of us. We sort of embraced, embarrassed. What a night.
Fartown vs Wakefield Trinity (1961-62) 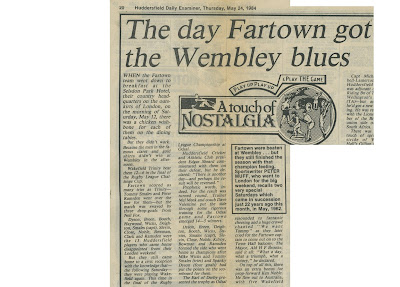 We lost at Wembley in the cup final. For years BBC sports programmes showed Spanky Dyson missing a tackle or not stifling a pass from Briggs, I think, to the winger. We beat them in the championship at Odsal Top. We hired a bus to travel to London from Dalton St Pauls. Went for the afternoon to Bradford - had an inflatable Yogi Bear dressed up in a Fartown shirt which we paraded on the pitch at the end of the game. Huddersfield New College boys. Working towards 'O' levels. At 14 years old, rugby and girls were more important.
1966 World Cup champions
England beat Germany at Association Football. I watched it on TV home alone. Great game with Geoff Hurst hat trick. I then had to post my 'A' level results to Liverpool to secure place in the clearing house - success. I was a bit worried about creasing the certificate. A* A* with a B from the previous year. We did three years in the sixth form. Something to do with Oxbridge.
Tug-of-War champions: Winwick Hospital (1970) 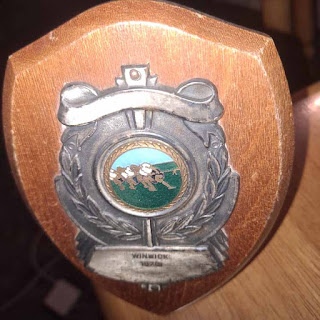 I don't remember how we got into this. We lived in a Toxteth flat and fancied a day out I guess. Must have been representing one of the Liverpool hospitals. The tournament was held at a large asylum near Warrington. I seem to think there was athletics as well. Recruited some other rugby boys. We got to the final which had been won forever by a particular team. We are wearing football boots. Them all pukka in hobnails. Our coach simply told us to pull when they were up in the air. Beat them in two rounds straight. Miffed or what? Big smiles on the spectators. 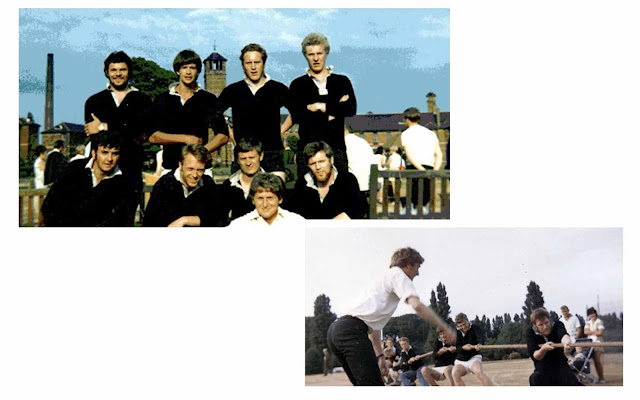 Waterloo (Southport) vs Orrell (1971-72)
Over 20 years before professionalism. Waterloo was a posh rugby union club near Southport - Blundellsands to be precise. We played there because one of us, Chris, went to the same school (Rydal, N Wales) as an England International, Chris Jennins. We didn't play for the college/university as we had other commitments on Wednesdays.
From a 1971 memoire - 'The fixtures included Headingley and Gosforth away, and a long home run, Harlequins, Northampton, Moseley, Rugby, Birkenhead Park for example, who were all 'first class' sides then. We lost more than we won. We had some names. Greenwood played for England, and there were county players like Hanley, Lyon and Smaje. But they weren’t regularly with us, we’d no coaching and morale was low.' Since the leagues came in, these prestigious fixtures have gone. 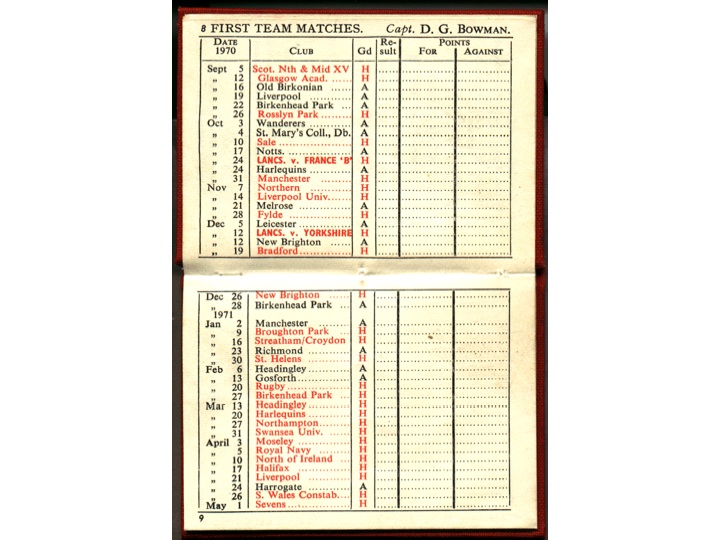 Orrell was a second tier club, socially, from Wigan, but on the up. Some well known players - Carleton, Brian Ashton, Dewi Morris and more. They won many Lancashire Cups and other competitions. But, Waterloo wouldn't play them. Until this night match which we won. They had won the cup the previous weekend and were still celebrating. I scored in the corner next to the railway line.
We moved to Cardiff pretty soon after. Junior doctor, taking exams and researching.
Sporting moments (2) later this week.
Posted by David Walker

Email ThisBlogThis!Share to TwitterShare to FacebookShare to Pinterest
Labels: away days, sporting moments