Uncle 4 stripes has to collect his passport personally

Having made an appointment for 10.45 we were surprised to hear it wouldn't be ready until 3.30. "They do have to stick a photo in," I said.

So, whilst waiting, we wandered around the waterfront.


The 'Echo' reports as follows - Liverpool's Albert Dock is just one of many sites around the world where couples clip their engraved padlocks.
Since the early 2000s the romantic gesture has become a worldwide phenomenon, with thousands of locks being placed on famous bridges including the Pont de l'Archeveche in Paris, the Brooklyn Bridge in New York, and the Ponte Milvio in Rome. In Liverpool a string of love locks have been fastened to railings alongside the Albert Dock.
Before the padlocks are clipped into place, they are typically engraved with initials or a personal message, and the key is then thrown away - usually into the river. 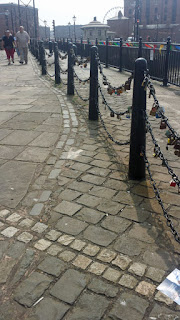 While some see it as a nuisance, or even vandalism, for others its the ultimate way to symbolise their unbreakable love. 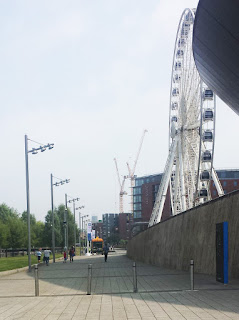 Sadly (before white wine), I made the wrong call, pointed out to me by a very nice elderly lady who suddenly appeared, presumably from the female half of the loo.